Rep. Elise Stefanik (R-NY) weighed in on the U.S. Senate primary race in Pennsylvania on Wednesday, declaring her endorsement for Republican businessman David McCormick, one of the race’s frontrunning candidates.

Stefanik, the House GOP Conference chair, said in a statement to Breitbart News she is “proud” to back McCormick, a former hedge fund CEO and Army veteran running in a packed primary field in a race less than two months away.

“Dave McCormick served our country on the frontlines of the Gulf War, and I know he will continue to honorably serve the Commonwealth of Pennsylvania and our great nation, which is why I’m proud to endorse him for U.S. Senate,” Stefanik said.

McCormick, a Pennsylvania native who grew up in Bloomsburg, graduated from West Point before serving as an Army paratrooper in the 82nd Airborne Division in Iraq during the Gulf War.

His lengthy resume also includes receiving a PhD from Princeton, working in the Treasury Department under former President George W. Bush, and serving as president and later CEO of Bridgewater Associates, which Forbes bills as the largest hedge fund in the world.

Stefanik, whose conference chair position makes her the third-ranking Republican in the House, has been aggressively focused on promoting Republican women in Congress through her committee E-PAC. But the congresswoman has also backed other candidates, including Rep. Ted Budd (R-NC), a Trump-backed Senate hopeful in North Carolina; Joe Pinion, who is challenging Senate Majority Leader Chuck Schumer (D-NY) in her home state; as well as multiple others outside of her core E-PAC group.

This is a preview of the Republican House majority that we will earn in November.

It will be filled with successful and diverse GOP Women from all over the nation.

GOP Women are stepping up, fired up, and leading like never before to take back the House & Save America! 🇺🇸 pic.twitter.com/BN55UIPuBW

“I look forward to joining the momentum behind Team McCormick and being a part of the strong, conservative Women for McCormick coalition,” Stefanik stated.

McCormick expressed his gratitude in a response statement to Breitbart News, saying he was “grateful to have such an exceptional team of strong and conservative women supporting my campaign, including the endorsement of Representative Elise Stefanik.” He added that Stefanik “is one of the leading conservative voices in the U.S. Congress” and that he was “honored” to receive her support.

“If elected to the U.S. Senate, I will be a steadfast voice alongside Elise to restore President Trump’s America First policies to fix our economy, establish energy dominance, secure our border and restore America’s strength on the world stage,” McCormick said.

McCormick, who has led several recent polls in the Republican primary contest, is seeing his greatest competition in Dr. Mehmet Oz, the celebrity surgeon who launched his campaign in November with a message focused largely on health care and criticisms of the government’s handling of coronavirus. 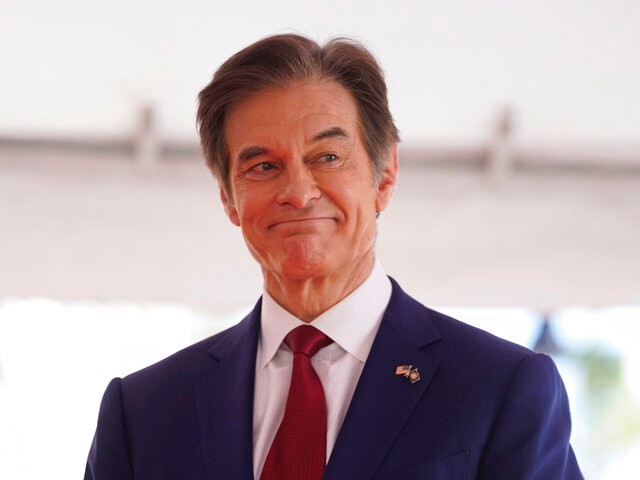 Dr. Mehmet Oz appears during a ceremony honoring him with a star on the Hollywood Walk of Fame on February 11, 2022, in Los Angeles. (AP Photo/Chris Pizzello)

Oz has the benefit of name recognition from his years hosting the Dr. Oz Show. The TV star also boasts a prominent endorsement from Sean Hannity and is rumored to appeal to first lady Melania Trump. But Oz’s background has been scrutinized amid his bid for office, and unearthed views that run counter to conservativism threaten his campaign. Oz, for instance, has a history of advocating for gun restrictions and was found to have ownership in a company fined for employing illegal aliens.

Oz’s candidacy has also brought to light questions about his deep roots in Turkey. Oz has dual-citizenship in Turkey and the U.S. and once served as a medical aid in the Turkish military. While Oz has said he maintains his citizenship in Turkey to be able to more easily visit his ailing mother, his critics have called his allegiances into question given the unprecedented nature of serving in Congress while being a citizen elsewhere. Oz has responded by saying he would renounce his Turkish citizenship but says he will only do so if he is elected to Congress. A recent Washington Free Beacon poll reinforced the citizenship concerns, finding that a majority, or 66 percent, of poll respondents were “critical of Oz’s close ties to Turkey.”

In addition to Oz, also in the mix of primary candidates are military veteran Kathy Barnette, real estate developer Jeff Bartos, and former Trump Administration Ambassador to Denmark Carla Sands. The latest poll, taken by Fox News, showed all three in the single digits behind McCormick and Oz, although a plurality of respondents in that poll, or 31 percent, said they were still undecided on a candidate.

While former President Donald Trump has been relatively quiet on the race so far, big-name endorsements like the one that just came from Stefanik have game-changing potential in the Keystone State, a populous battleground where the Republican Senate candidate is likely to face either the Democrats’ current frontrunning candidate, Lt. Gov. John Fetterman, or Rep. Conor Lamb (D-PA), who has been trailing Fetterman in polls.

The two Republican frontrunners, Oz and McCormick, will face each other for the first time in a Senate candidate forum hosted by the Manufacturer & Business Association Wednesday morning at 9:00 a.m. Bartos and Barnette are also expected to participate in the forum.

The primary will take place May 17.