Observers following tumultuous events across the Middle East in recent days may find it confusing that Iranian leadership figures would be cheering for the protesters in the streets of Egypt, Tunisia, and elsewhere. After all, not only are most Iranians Shi’ite Muslims, while the majority of the angry crowds calling for the downfall of Arab dictatorships are Sunni, but Iran faces its own Greens Movement opposition that continues to demand regime change in Tehran. It is worth noting that the Iranian regime crackdown against its own people’s uprising has been far more brutal than anything seen so far in either Egypt or Tunisia.

And yet, addressing the Friday prayer service in Tehran on 28 January 2011, Ayatollah Ahmad Khatami asserted approvingly: “these movements are the aftershocks of the Islamic Revolution.”

Mohammad-Javad Larijani, secretary-general of the Iranian High Council for Human Rights (and brother of Iranian parliament speaker, Ali Larijani), struck an almost jubilant tone: “In my opinion, the Islamic Republic of Iran should see these events without exception in a positive light,” he said. 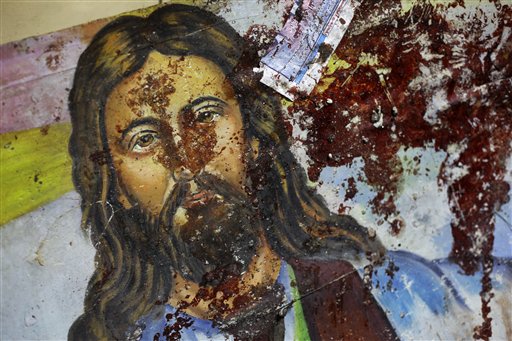 If Egypt’s longtime strongman Mubarak falls, the most likely successor will be the Muslim Brotherhood. Harshly suppressed in Egypt, the country where Hasan al-Banna founded the group in 1928, the Brotherhood (or Ikhwan) is dedicated to Islamic jihad and the global imposition of shariah (Islamic law). This is exactly the same agenda described in the 1979 and 1989 Iranian constitutions, under which the Ayatollah Khomeini and his successors have subjugated Iranians to the full horror of the Islamic legal system for the last 31 years. HAMAS is the Muslim Brotherhood branch that seized control of Gaza in a bloody 2007 putsch and has since imposed shariah on the Palestinian population there. In Lebanon, where the Iranian terror proxy Hizballah stands poised to dominate the country both militarily and politically, the specter of Islamic law also hangs over a multi-sectarian society that includes Christians, Druze, Shi’a, and Sunni Muslims.

Although in response to tough government policies, the Muslim Brotherhood temporarily refrained from violent terrorism in Egypt in recent years, it never swerved from its ultimate objectives to re-instate the Muslim Caliphate and subjugate the world, Muslim and non-Muslim, to shariah. Alarmingly, a 2010 Pew Research Center survey found that a lot of Egyptians apparently share that vision. Among Egyptians polled, there was nearly unanimous (95%) support for a large role for Islam in politics as well as 75% approval for the savage hudud punishments stipulated in shariah: death by stoning for adulterers, whippings and amputation for theft and other crimes, and a mandatory death penalty for apostasy from Islam.

It’s not that the Mubarak regime will ever conform to Jeffersonian ideals of democracy no matter what reforms the current crisis (or Obama administration) might prompt; nor have successive U.S. administrations ever understood Islam, shariah, or the anti-U.S., anti-Israel, and anti-West objectives of the Muslim Brotherhood well enough to implement effective counter-shariah policies either in the region or here at home, where the Muslim Brotherhood has established a pernicious and pervasive presence. But should the Egyptian government fall in violence, rather than reform gradually, the resulting advance of the forces of jihad and shariah will be catastrophic for Israel, U.S. national security interests in the region, and all religious minorities, such as Egypt’s Christian Copts, who already have suffered centuries of repression at the hands of Muslim supremacists.

The commonality among Shi’ite Khomeinists and Sunni Ikhwan is no coincidence. The clerical clique that rules Iran and the Muslim Brotherhood (whose off-shoots include not just HAMAS but also al-Qa’eda) pursue the same objectives because they are both faithful to mainstream, orthodox Islamic doctrine as defined in shariah. So do all the myriad Muslim Brotherhood front groups that currently operate in the U.S., whose agents of influence are positioned at the highest levels of U.S. intelligence, national security, and policy-making circles.

Reaching out to pro-democracy figures across the Middle East region and supporting their quest to establish representative civil society does not have to mean abandoning Egyptian president Mubarak or accepting the rise to power of the Muslim Brotherhood. Indeed, U.S. policy and the ideals of free society will be best served everywhere by an accurate understanding of the shariah threat that defines the aggressive agenda of both Khomeinist Shi’ites and Muslim Brotherhood Sunni.