We have devoted many pixels to exposing the American Progressive movement’s involvement in the violent Hamas Flotilla. Extensive details can be found here: The Progressive Jihad Against Israel.

Now, with the help of Progressive Democrats of America board member, and CodePink co-founder Susie “Madea” Benjamin, the American Progressive movement is taking off the Anti-Israel mask, and very public demonizing Israel (and by extension the Jews–especially the American kind) with a new social media campaign. Here are some of the vile fruits of their labor:

Israel is an apartheid state and American politicians are selling out to the Jews. Check.

Your Rep is not able to represent you because they are too busy helping evil racist Jewland at your expense. Check.

Unpatriotic America Jews get their elected officials to support evil racist Israel at the expense of needy Americans. Check. 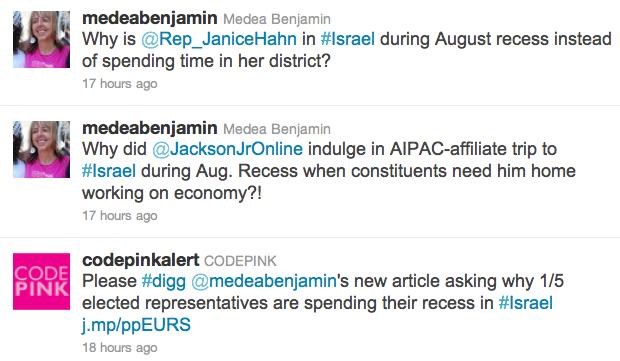 American Jews of all parties need to stand up and condemn this vile demonizing of Israel and the Jews.

Every single Jew that calls themselves a Democrat AND a supporter of a Jewish homeland of Israel has an obligation to stand against this dangerous rhetoric, or be made to own it. @MJayRosenberg, are you listening? J Street staff, are you listening?