Tel Aviv, Israel– On Sunday, A two-hour humanitarian ceasefire signed onto by both parties and facilitated by the Red Cross, one that was supposed to take place from 1:30-3:30 p.m. local time, was violated by Hamas less than 40 minutes into the agreement. The IDF said that gunmen opened fire on Israeli soldiers, disregarding the truce that was designed to allow aid workers to treat injured Gazans.

Five IDF soldiers were killed Saturday, and dozens wounded, in the ongoing operation in the Gaza Strip, totaling seven Israeli fatalities since the start of the undertaking into Hamas-controlled territory. At least 130 Palestinians have been killed, more than 110 being Hamas militants, since the beginning of the ground operation. Over 800 Palestinians have been wounded since the IDF began its forward push into Gaza on Thursday. The IDF says it has now found 36 distinct tunnel shafts, and has destroyed 14 of them.

Israel and Hamas are battling over the Hamas stronghold and heavily populated city of Shuja’iya, Gaza. The IDF has said it has found 10 tunnels in Shuja’iya alone, and has also suspected militants have launched at least 140 rockets from the city since fighting began Hamas has continued to utilize innocent civilians for defensive purposes, forcing them to form a human shield on the roofs of buildings. 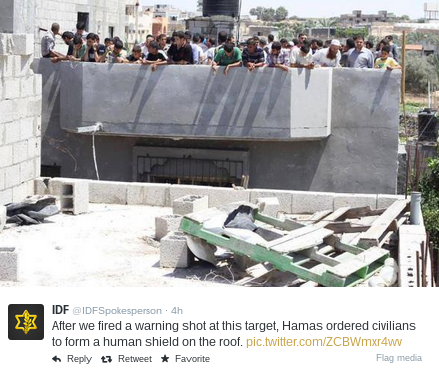 Hamas is said to be preventing international journalists from leaving the Gaza Strip. Several foreign journalists have been mentioning on Twitter that they are forcibly not being allowed to leave the conflict area through the Israel-Gaza Erez border crossing.

The Israeli security cabinet is set to convent at 9:00 p.m. to discuss the ongoing military operation in Gaza.