Miss Lebanon may lose her title over selfie with Miss Israel 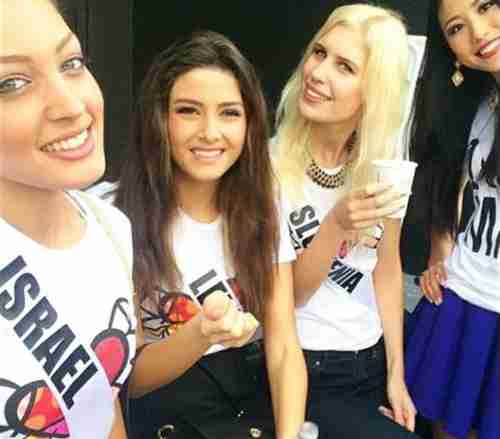 A selfie of four girls, in which Miss Lebanon Saly Greige is posing next to Miss Israel Doron Matalon, with wide smiles on their faces, may get Greige kicked out of the Miss Universe contest. Miss Slovenia and Miss Japan also appear in the selfie. Social media in Lebanon is being harshly critical:

You could have avoided mingling with the Israeli contestant like previous Lebanese contestants have done throughout the years. And if you were harassed like you say, you could have at least avoided the huge smile [we see] on your face.

Greige could be stripped of her Miss Lebanon title, and kicked out of the Miss Universe contest, but Greige said it wasn’t her fault:

From the first day I arrived at the Miss Universe pageant I was very careful not to take any pictures with Miss Israel, who tried repeatedly to take pictures with me. While I was preparing with Miss Slovenia and Miss Japan to get our photograph taken, Miss Israel jumped in and took a selfie with her phone and posted it on social media. This is what happened. I hope you continue supporting me.

In 1993, Miss Lebanon Huda al-Turk was stripped of her title for posing with a picture with Miss Israel at the time.

Lebanon and Israel are both on edge after an Israeli air strike in Syria killed two Hezbollah commanders. Hezbollah leader Sayyed Hassan Nasrallah is promising revenge, and there are fears that tit for tat retaliation might spiral out of control.

An Israeli helicopter struck a convoy of Hezbollah operatives, killing 12. One of the dead is field commander Jihad Mughniyeh, 25, the son of top commander Imad Mughniyeh. Imad was on the United States’ most wanted list for terrorism when he was killed in Damascus by a car bomb in 2008, allegedly from the Israelis. Imad’s son Jihad had been taking a more prominent role since his father’s death, and was overseeing operations in the Golan Heights.

Also killed was field commander Mohamad Issa, chief of Hezbollah operations in Syria, making this strike a major blow against Hezbollah, according to reports.

A Hezbollah statement confirmed the names of six Hezbollah fighters that had been killed, but omitted the names of six fighters from the Islamic Revolution Guards Corps (IRGC) that are fighting alongside their Hezbollah counterparts. Iran has been supplying IRGC troops to Syria’s president Bashar al-Assad and to Hezbollah, as well as to Iraq’s army, but has denied doing so. YNet (Israel) and Daily Star (Beirut) and Ya Libnan (Lebanon)

Many analysts expect the European Central Bank (ECB) to announce on Thursday a quantitative easing (QE) program, in which it will purchase hundreds of billions of euros of bonds issued by the various eurozone countries. Effective, the ECB will be “printing money,” and giving it to the individual countries.

Several countries, including the U.S. and Japan, have been aggressively pushing QE for years, but the ECB has resisted it because of fears of harming the euro currency and because the Germans have been opposed.

But pressure on the ECB to start QE has been increasing, along with numerous eurozone financial problems:

The markets are widely expecting QE to be announced this week, and as the US QE situation has shown, that money just goes into the stock market, so that the top 1% make even more money. So if there’s no QE announcement this week, then disappointed investors may sell off, causing the stock market to fall.

Some analysts are concerned that whatever the ECB tries, it will be too little too late. Pressure from Germany may keep the ECB program from being too aggressive. Furthermore, other countries started QE years ago, and it may be too late to catch up. Forbes and Bloomberg and Brisbane Times (Australia)