Kurdish militias drive ISIS out of the Syrian town of Kobani 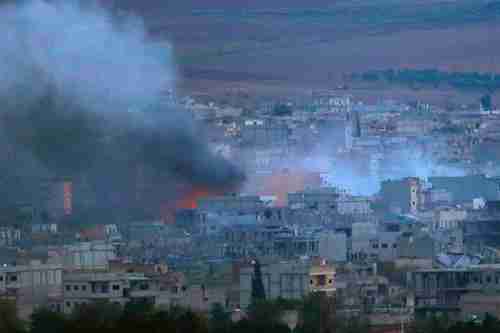 A fire burns in Kobani, Syria during heavy fighting between ISIS and Kurdish Peshmerga forces (Reuters)

Kurdish forces announced on Monday a major victory over the Islamic State of Iraq and Syria (IS or ISIS or ISIL), having driven all ISIS forces out of Kobani, Syria, a town strategically located on the border with Turkey.

The battle over Kobani dominated news coverage for some time in summer of last year because ISIS had committed so many of its men, weapons and other resources to capturing the town, largely occupied by Kurds. Syrian PYD Kurdish militias were losing ground to ISIS, even with the help of daily American warplane strikes. Tens of thousands of Kobani refugees were pouring into Turkey as refugees.

Then, in October, Turkey had a major policy reversal, and announced that it would, after all, allow Iraqi peshmerga Kurdish militias to cross the border from Iraq into Turkey, travel over Turkish soil, and then cross the border into Kobani in Syria. This was a big problem for Turkey, and actually caused a political rift, because Turkey has fought an insurgency by PKK Kurdish insurgents in Turkey over the last two decades. So it was a surprise when Turkey’s president Recep Tayyip Erdogan announced in October that this would be permitted. The peshmerga forces from Iraq were heavily armed, and their aid to the PYD are now given credit for turning the tide in the battle of Kobani.

Numerous analysts have stated that the U.S. administration’s announced military strategy of airstrikes-only, without “boots on the ground,” has no chance of pushing back ISIS. The battle of Kobani is an example of the kind of battle that these analysts have been describing as necessary, but with Kurdish peshmerga forces supplying the boots. However, there is no other publicly-declared example of US-led forces closely coordinating militarily with a ground force to battle ISIS.

Turkey on Sunday opened its biggest refugee camp to house 35,000 people fleeing from the fighting in Kobani. There are 1.7 Syrian refugees in Turkey, of which 200,000 have come from Kobani. The majority of the refugees live outside camps, sometimes on the streets and in shantytowns, creating tensions with the local population. Turkey has some 24 camps, housing 265,000 Syrian refugees. Zaman (Turkey) 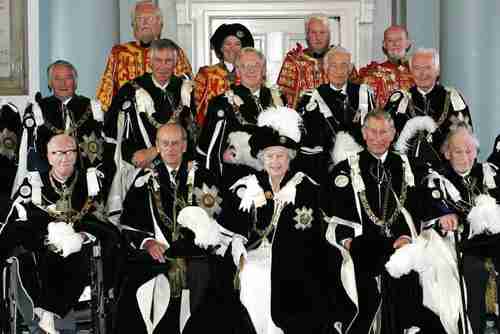 Queen Elizabeth, with her husband Prince Philip to her right, in a group shot with the Knights of the Thistle. (AFP)

Australia’s Prime Minister Tony Abbott has awarded Prince Philip, the Duke of Edinburgh, with an Australian knighthood, the country’s highest honor. Prince Philip is the husband of Queen Elizabeth, who is Australia’s ruling monarch in name only.

According to Australia’s Defense Minister Kevin Andrews, Prince Philip’s contribution to Australia has been “phenomenal”:

“It doesn’t cost us anything to give him this award. How else do we say, in a sense, thank you to someone who’s given six decades of public service? I think it’s a phenomenal contribution. He’s still doing it in his 90s now and I think we should just be generous about it.”

However, many MPs were angered and dismayed by the award. One said that the award was “a stupid announcement” and “manifestly amazing in the worst possible way.” Another said, “I thought it was wackily quaint and anachronistic. But now it’s just become an acute embarrassment, just plainly ridiculous.” Australian Broadcasting