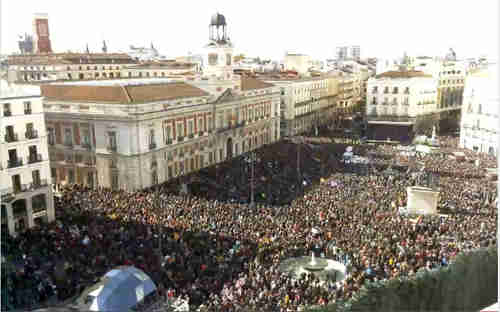 A week after Greece’s radical far-left Syriza took power in Greece, Spain’s radical far-left Podemos (Spanish for “we can”) hopes to do the same. In a major show of force, some 100,000 party supporters held anti-austerity demonstrations in Madrid on Saturday, chanting “Yes we can” and “tick tock tick tock,” the latter to tell politicians that the clock was ticking. The party is tapping into anger over austerity programs that the EU forced them to impose and over corruption among the political elites.

Podemos makes many of the same promises that Syriza did. They promise to significantly raise the minimum wage and enact laws preventing businesses from laying off employees, lowering the retirement age from 65 to 60 and increasing pension payments.

However, the path for Podemos will be much harder than it was for Syriza. Podemos is polling at only 30%, not enough to gain a majority, and without the ability to take advantage of any quirk in Spain’s election laws similar to one in Greece’s election laws that turned Syriza’s 36% plurality into a governing majority. Furthermore, Spain’s economy has been doing much better under austerity than Greece’s has. Even though the unemployment rate is still 23.7%, it has been steadily declining.

The rapid growth of Podemos in Spain shows the danger that Europe is facing in its crisis negotiations with Greece. If Europe is too tough, then Greece could be forced to leave the eurozone, which would, some analysts say, be disastrous for both Greece and the eurozone. And if Europe is too easy on Greece, then you get “contamination,” where countries like Spain, Portugal and Italy will demand similar treatment that Germany, among others, would not stand for. Spain Report and Bloomberg

Egypt’s “Cairo Court of Urgent Matters” issued a verdict banning Hamas and designating its military wing, the Al-Qassam Brigades, as “terrorist organizations.” The court ruled that:

A spokesman for Hamas said that the verdict was “dangerous,” and that “Al-Qassam Brigades are the symbol of resistance against the Israeli occupation, and a symbol of the [Palestinian] nation’s pride and dignity, despite all attempts at defamation.”

Shortly after the court decision, in a strident televised speech on Saturday, Egypt’s president Abdel al-Fattah al-Sisi blamed Hamas, the Muslim Brotherhood, and unnamed foreign countries for the terror attacks on Egypt:

The terror group Ansar Bayt al-Maqdis (ABM – Ansar Jerusalem – Champions of Jerusalem) took credit for Thursday’s terror attack, and has perpetrated numerous attacks in the past. In November, ABM changed its allegiance from al-Qaeda to the Islamic Stateof Iraq and Syria (IS or ISIS or ISIL). At the same time, ABM changed its name to “State of Sinai,” in harmony with the ISIS name “Islamic State.”

Hamas itself was founded in the early 1980s as an offshoot of the Muslim Brotherhood, and there were reports last year that the Brotherhood is funding ABM. According to Nabil Naeem, founder of the Islamic Jihad, another terror group in Gaza, ABM has two branches, one in Gaza and one in Sinai, and has close relations with Hamas.

We will not leave Sinai to anyone. With your will the army will win its confrontation with the terrorists.

It was your will on the 30 June 2013 (the date of mass anti-Morsi protests), and it was one of the hardest decisions taken by you; and it’s your will that will keep Egypt strong and able to defeat these terrorists.

We have been reporting since last summer on the changing alliances in the Mideast, particularly the aftermath of a major Mideast realignment following the Gaza war, bringing Israel plus Egypt plus Saudi Arabia plus the Palestinian Authority in alliance versus Hamas plus Qatar plus Turkey plus the Muslim Brotherhood. The split between Qatar and Egypt had been particularly vitriolic prior to the war, ever since the ouster of Mohamed Morsi, but after the Gaza war the split between the Saudis and Qataris was equally vitriolic. Saudi King Abdullah acted as a mediator and was able to paper over the differences and obtain a reconciliation in time for an Arab summit meeting in December.

But now King Abdullah has passed away, and two things on Saturday indicate that the vitriol is returning in full force: the court verdict banning Hamas, and al-Sisi’s accusations directed at “foreign countries.”

But Egypt, Israel, Saudi Arabia and Qatar are in generational Crisis eras, and so are attracted to war. So it is very unlikely that there will be a new reconciliation between Egypt and Qatar, or between Egypt and Hamas. Israel and Egypt now appear to be firmly in the same corner, fighting terrorist acts from Palestinians, al-Qaeda and ISIS, and these relationships are expected strengthen with each new terrorist attack. The Muslim versus Muslim war in the Mideast, North Africa, and South Asia, that I’ve been describing for weeks, continues to grow and become more dangerous on a weekly basis. Al Ahram (Cairo) and Daily News Egypt and Al Ahram and Egypt Independent (9-Sep-2014)

Houthis use live fire against protesters in Yemen

Tens of thousands of people demonstrated in several cities in Yemen on Saturday, as opposition continues to grow against the Houthi takeover of the government in Sanaa. Houthi militia fighters used live ammunition to break up the demonstrations, firing live rounds into the air. Several protesters were reportedly abducted on Saturday by Houthis, including youth activist Fouad al-Hamdani. Al Jazeera and Middle East Eye