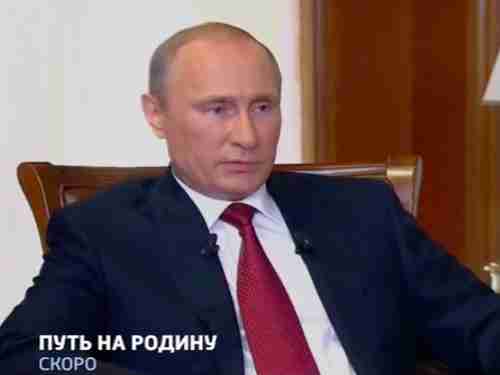 Russia’s president Vladimir Putin said in an interview in a forthcoming TV documentary that he ordered the invasion and annexation of Crimea weeks before it occurred, during a period of time when he repeatedly lied about the presence of Russian troops and about his intentions. He gives as a reason for his decision that Ukraine’s Prime Minister Viktor Yanukovych had been ousted and his life was in danger, but he does not explain why that justifies invading another country and annexing its territory.

This whole situation has almost been a laugh factory. Based on news reports, it was perfectly obvious to me and NATO officials and others that Putin was lying, but in the United Nations and other official forums it was necessary to play the game that NATO says this but Russia says that. And then there was Putin’s army of paid Russian trolls, whose job was to harass people like me who were describing what was really going on. I had the honor of being targeted by no less than three of the trolls on different web sites, and one of them visited me just last week to say that it wasn’t anti-government Ukraine Russians who shot down Malaysian Airlines MH17.

Putin’s constant lying, and contempt for everyone else, has at least taken a toll. Secretary of State John Kerry and other officials have called Putin a liar. German Chancellor Angela Merkel, who originally tried to remain neutral, has become the unlikely leader of the pro-Ukrainian cause, though still restricted to diplomatic means.

There is an increasing realization among European officials that the European experiment is failing, and not just because the euro currency is in trouble. The two world wars were a huge bloodbath across the entire continent, and the purpose of the European experiment was to make sure it did not happen again. One cornerstone of that experiment was to prevent any dictator from unilaterally redrawing country borders again, as Hitler had done. And if the EU cannot stop Russia from redrawing its borders with Ukraine, then the European Union will, literally, be a failure. BBC and AFP and Reuters

Europe to Greece: Stop wasting time and get serious about reforms

Dutch Finance Minister Jeroen Dijsselbloem, who heads the Eurogroup of eurozone financial ministers, is telling Greece to “stop wasting time.” Greece’s finance minister Yanis Varoufakis on Friday provided the Eurogroup with a list of reforms, but the list was vague, without any real reforms.

So far, Greece has made vague promises with no specifics. The Eurogroup met on Monday in Brussels and reviewed Tsipras’s vague list. According to Dijsselbloem:

We agreed there is no further time to lose. … We have to stop wasting time and really start talks seriously. We’ve lost over two weeks — in which very little progress has been made. The real talks haven’t started yet. There has been no implementation.

So on Wednesday, the “institutions” will go to Athens to hammer out an implementation. The “institutions” are the organizations bailing out Greece — the European Commission (EC), the European Central Bank (ECB) and the International Monetary Fund (IMF). These three organizations used to be called “the troika,” but Tsipras hates the word “troika” and made a campaign promise that there would be “No more troika!” So, there’s no longer a troika. Now there are “three institutions.”

That’s just about the only campaign promise he’s kept. He promised other things, particularly that he would convince the Europeans to cut Greece’s outstanding debt in half, and to allow a “significant moratorium” on debt repayments. Those and other promises have been completely abandoned. As a result, Tsipras is facing pressure from Greece’s far left. Anarchist riots started again recently, and Syriza’s political office was overrun by protesters over the weekend.

In fact, not only is Greece not meeting its commitments, it’s slipping backwards, in an attempt to appease the hard left. Over the weekend, Tsipras said that he would be submitting legislation to provide free food and electricity to 300,000 poor households, stretching repayment terms for those behind on their taxes (with up to 100 installments!) and freezing home foreclosures.

There is a great deal of nervousness about the upcoming meeting in Athens on Wednesday. History tells us that they will “kick the can down the road” again, but positions have been hardening, and it is possible they’ll end up with blood on the floor.

If no agreement is reached, then Greece will be bankrupt in about three weeks. Kathimerini and Business Insider and Financial Post and Reuters