Saudi Arabia declares that it has met military objectives in Yemen 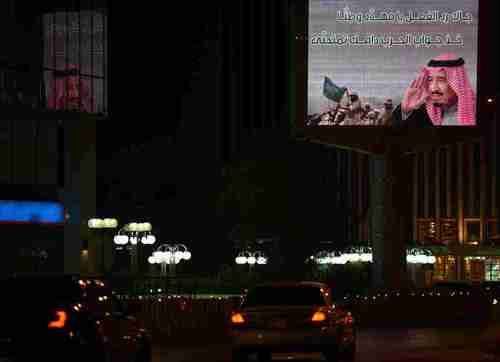 Saudi Arabia’s military announced on Tuesday that it had met its military objectives in Yemen, and that “Operation Decisive Storm” is over.

They also announced that “Operation Restoration of Hope” is beginning.

It is not clear what the difference is. The Saudi-led coalition began a heavy campaign of air strikes on March 23, and Brig. Gen. Ahmed Asiri, the Saudi military spokesman who announced the change in the name of the operation, did not indicate whether there would be any change to the airstrike campaign.

Analysts that I heard suggested that the Saudis were bowing to international pressure in view of the number of civilians being killed by the airstrikes, but that there would never be a resolution of the conflict with the Houthis unless the Saudis launched a ground troop invasion. Daily Star (Beirut) and Arab News

Patriotism and nationalism surge in Saudi Arabia, but not in Iran

According to an NPR story, the Saudi public has become increasing patriotic and nationalistic since the Saudi airstrikes have begun. In addition, the popularity of the new King Salman bin Abdulaziz al Saud has skyrocketed:

Jamal Khashoggi, a Saudi journalist, says there is unprecedented unity inside the kingdom because Saudi is seen as standing up to Iran:

We felt humiliated, we felt worried of Iranian expansionism, and we felt somebody must stand against that. And that’s why Saudi people are so much now supporting of King Salman, they feel he is the man that made that stand. […]

His popularity skyrocketed, people were talking about him before as a kid, we didn’t know much about him. But nowadays, with this patriotic euphoria, he scored big time.

All of this information is anecdotal, but it paints a picture of a Saudi population in sync with the government leadership in pursuing the Yemen war.

From the point of view of generational theory, this is what I refer to as a “war that comes from the people.” The Saudi population does not need to be convinced of the necessity of the war in Yemen; they were receptive to it from the moment it happened. That is because Saudi Arabia is deep into a generational Crisis era, as I explained yesterday, which means that patriotism and nationalism are going to be high.

The journalist Khashoggi is quoted as saying that the “unprecedented unity” is occurring BECAUSE Saudi Arabia is seen standing up to Iran.

But from the point of view of Generational Dynamics, that is not the reason at all. Just standing up to an enemy does not always unify the country. Americans were unified behind President Roosevelt in World War II, which was a generational crisis war, but not behind Presidents Kennedy or Johnson in the Vietnam war, which was an Awakening era war.

Like America in the 1960s, Iran is in a generational Awakening era today, since only one generation has passed since the end of Iran’s Great Islamic Revolution and the Iran/Iraq war that climaxed in 1988.

There are plenty of reports about statements from Iran government officials. Here is one from a speech by Iran’s Supreme Leader Ayatollah Seyed Ali Khamenei from February:

Whether or not our enemies like it, the Islamic Revolution has been advancing since its beginning, and today we have might in Iraq, Afghanistan, Pakistan, Bahrain, Yemen, and even Saudi Arabia, that we did not have from 1978-1991… In the not-so-distant future, we will see the twilight of America and Israel – this is not a slogan… Today we in Iran, Hizbullah in Lebanon, Ansar Allah [i.e. the Houthi movement] in Yemen, the National Defense Force in Syria, [and] the popular forces in Iraq have become much stronger… The great popular army begins to take shape in the world; be certain that this movement is undefeatable.

So this is what I refer to as “a war that comes from the politicians.” The public mood is completely different, and the public support is almost nonexistent.

The difference is that Iran’s population today contains many survivors of the 1980s wars. They remember how bloody the revolution was, and how 1 1/2 million people were killed in the war with Saddam. And of course they remember that they were victimized by Saddam’s use of poison gas.

That is why there are no carwashes in Iran exalting Iran’s support for the Houthis in Yemen. In fact, that is why Khamenei cannot even admit that Iran is participating, since he knows how unpopular that would be. The Iranian people remember the 1980s, and do not want another war.

Here is a brief additional word on some nearby countries. Iraq, Syria and Lebanon are also all in generational Awakening eras, and the public mood is similar.

In Iraq in the 1980s, the Sunnis and Shias were unified behind Saddam to fight Iran in the Iran/Iraq war. Today, the Sunnis are joining up with Islamic State (IS or ISIS or ISIL or Daesh), the Iraqi army has a reputation for dropping their weapons and running for their lives, and the Shia militias have had little success.

In Syria, president Bashar al-Assad is using everything from heavy weapons to Sarin gas to chlorine gas to subjugate his people, but instead of fighting, they are running away, and now there are millions of Syrian refugees in neighboring countries.

In Lebanon, the political situation is so fractured that the country has been unable to elect a president for months. Hezbollah militias are fighting in Syria, but that is because Hezbollah leader Sayyed Hassan Nasrallah is forcing them to, and, ironically, that is because Nasrallah’s puppetmasters in Iran are forcing him to do so.

But other countries — Saudi Arabia, Jordan, Egypt, Israel, Palestinian territories (Palestine) — are deep into a generational crisis era, and those countries are going to drive the coming major sectarian war. NPR and Memri and Gulf News/Washington Post