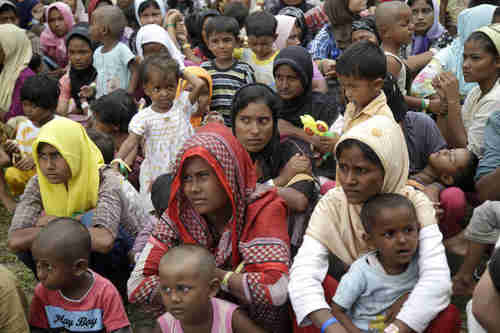 President Thein Sein of Myanmar (Burma) has signed into law the Population Control Health Care Bill, to require mothers to have their children at least three years apart. Nominally, the purpose of the bill is to “protect women’s health,” but opponents say that it is designed to target Rohingya Muslims.

The law does not provide punishment for parents who do not comply, but it gives local authorities the power to take whatever steps are necessary to implement the law. Human rights activists say that this gives a blank check to local police to take harsh measures with Rohingya families.

Rohingya Muslim migrants have lived peacefully in Myanmar (Burma) for generations, but are now being slaughtered and driven from their homes by Buddhists led by Buddhist monk Ashin Wirathu. Some 140,000 have been herded into dirty apartheid-like camps. Thousands of Rohingya have fled Burma. An estimated 2000 Rohingya migrants are have been trapped for over 40 days in crowded boats off the coast in the Bay of Bengal. Thousands more are in boats further south in the Andaman Sea, where they have been trying to reach shore in Thailand, Indonesia or Malaysia. However, officials in those three countries have been pushing the boats back out to sea when they approach shore, although an agreement last week may permit up to 7,000 to be sheltered temporarily.

The new Population Control law was enacted in response to the demands of hard-line Buddhists who have repeatedly warned that Muslims, with their high birthrates, could take over the country of 50 million even though they currently represent less than 10 percent of the population.

However, human rights activists warn that this attitude is racist and anti-Muslim, and that the new law will “exacerbate ethnic and religious divisions and undermine the country’s efforts to promote tolerance and diversity.” AP and AFP

Burma’s last two generational crisis wars (1886-91 and 1948-58) were extremely bloody and violent civil wars between ethnic groups. (See “Burma: Growing demonstrations by the ’88 Generation’ raise fears of new slaughter” from 2007, for a generational history of Burma.)

Any country that goes through a crisis civil war faces the problem, in the decades that follow, of preventing old hatreds to lead to a renewal of that civil war. For that reason, it is fairly common for the military to take control of the government after the civil war ends, and to use military and police power to try to control riots and demonstrations, fearing that they will destabilize the country and lead to a new civil war.

So in 2008, as the 20th anniversary of the 1988 massacre approached, there were massive new demonstrations in Rangoon (Yangon), led by monks and nuns, as well as many ordinary citizens. Burma’s military junta ordered thousands of troops into the streets of Rangoon. Hundreds of activists and citizens were shot dead or burned alive in government crematoriums. Thousands of Buddhist monks, who led the protests to begin with, were rounded up and detained. Some were found floating face down in rivers. This repression was done in order to promote “stability.”

The result was an enormous international backlash, along with economic sanctions. This caused the pendulum to move away from repression (stability) back towards reforms, including free elections and freedom of expression. The purpose of these reforms is to promote “human rights.”

However, the end of repression unleashed a lot of hatred that had been bottled up since the 1950s generational crisis civil war. New protests began appearing in the northern provinces of Kachin and Shan, and earlier this year we reported on fighting between Burma’s army and ethnic Chinese in Burma’s Kokang Special Region.

Now Burma’s government is again moving away from reforms (human rights) and back in the direction of repression (stability) with the new Population Control law. The parliament is considering additional bills relating to monogamy, religious conversion and interfaith marriage. These laws are also being demanded by hardline Buddhists with an anti-Muslim agenda.

From the point of view of Generational Dynamics, this vacillation between repression and reforms never succeeds in bringing peace. As the generations of survivors of the last crisis civil war die off, and the country enters a new generational Crisis era, there is a huge, new bloody civil war. Deutsche Welle and Economist

Ireland’s referendum on gay marriage has passed overwhelmingly, despite being bitterly opposed by the Catholic Church. It seems that Irish Catholics can overwhelmingly call themselves Catholics, go to Church every Sunday and still completely ignore the teachings of the Pope. This has been true in the case of contraceptives for years.

The lesson to be learned is that you cannot depend on churches, synagogues, mosques or politicians to tell you how people think and behave. Millions of Muslims may pray in mosques where they are taught jihadism, but that does not mean that they are all jihadists. Other methods must be used to determine what the populations and different generations of people in a country think, and how they will behave when they are forced to make difficult choices. Irish Times and Religion News Service