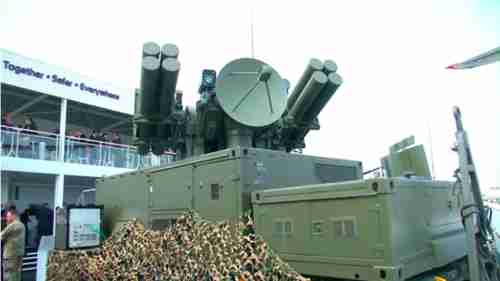 Ever since Russia invaded Georgia in 2008, annexing two Georgia provinces, Abkhazia and South Ossetia, it has been an unwritten European Union policy not to sell advanced weapons to Georgia, for fear of angering Russia and increasing tensions.

However, there is little support for such a policy anymore, after Russia invaded Ukraine, and annexed Ukraine’s Crimea peninsula. As a result, France has agreed to sell Georgia “advanced air defense systems.” The exact weapons systems to be supplied are top secret, but it is known that the supplier will be ThalesRaytheonSystems (TRS), which is a joint venture of the French defense electronics group Thales and US arms maker Raytheon. The company produces a range of ground-based surveillance radars, air defense command-and-control systems, as well as cyber capabilities.

Supplying just radars to Georgia would not be a big deal, as France supplied radars to Georgia after the end of the 2008 war with Russia. The unknown is whether the weapons will include either anti-aircraft systems or advanced anti-missile systems.

First discussions with France last year about the air defense deal triggered a major political crisis in Georgia. Former Defense Minister Irakli Alasania, who initiated the process of purchasing French air defense units, was unexpectedly fired last year, and made the sensational accusation that the deal was sabotaged by the prime minister, presumably at Russia’s request.

Alasania claimed last year that the air defense systems to be purchased from France would be able to shoot down not only any type of Russian aircraft, but also even Russian ballistic missiles of the “Iskander” type. This claim was significant because Russia fired an Iskander missile into Georgia on August 12, 2008, killing dozens of civilians and a Dutch cameraman.

However, the current Georgia government is making no mention of Alasania’s statement, causing the political opposition to be suspicious that the new deal with France was watered down to meet demands by Russia. EurasiaNet and Georgian Journal and Jamestown

Greece joins Zimbabwe and Cuba in missing an IMF payment

At midnight on Tuesday, June 30, Greece became the first “developed” nation to miss a payment to the International Monetary Fund (IMF), joining the ranks of “undeveloped” nations, including Zimbabwe and Cuba, that have also missed IMF payments.

Greece is now “in arrears” in payments to the IMF, but is not “in default.” The three major credit-rating companies have said failure to pay the IMF does not constitute a default because that term is reserved for private-sector creditors. Greece has requested an extension for payment to the IMF, but it is thought to be unlikely that the IMF will grant the request.

Earlier in the day, a panicky prime minister Alexis Tsipras made a desperate last gasp proposal to the Eurogroup to request a new 2-year bailout program. The Eurogroup rejected it immediately.

It now appears that there will be several days of arguing and posturing on the part of both the Greek government and the European leaders. Right now, it seems the most significant next event will be the referendum on Sunday.

Since the referendum refers to a bailout plan that no longer exists, no one knows what YES means or what NO means. So it is now being widely assumed that YES will mean that Greece will remain in the eurozone, and NO means that Greece should leave the eurozone. As I wrote yesterday, my personal opinion, not a Generational Dynamics prediction, is that one way or another Greece will remain in the eurozone, even if the referendum vote is NO. Bloomberg and Kathimerini

With $72 billion in debts and an extremely weak economy, Puerto Rico is in an economic death spiral, and may run out of cash within a few weeks, and be unable to pay salaries, pensions and other government expenses.

The White House has stated that there are no plans to bail out Puerto Rico.

Congressional leaders, led by New York Senator Charles Schumer, are considering a bill that would give Puerto Rico access to the bankruptcy courts.

A Puerto Rico bankruptcy, whether handled by a bankruptcy court of not, would have major consequences for Americans. Two-thirds of pension and retirement funds are holding Puerto Rico bonds, and these funds stand to lose billions of dollars. Bloomberg and NY Daily News

Historically, an earth day has for centuries been defined as 84600 seconds long. But as it turns out, the rotation of the earth is a variable fraction of a second longer than that. Furthermore, the amount of variation can depend on things like earthquakes. The leap second is added at irregular intervals, by international agreement, to make up for that variation.

The fact that the dates of the leap seconds cannot be predicted in advance causes severe problems for some computer software developers.

Even in 1972, the time of the first leap second, system programmers for IBM mainframe operating systems had to deal with problems associated with leap seconds.

But today, the problems are much more severe. The guidance system for a rocket or missile may fail because of an added second at an unexpected time.

Real time financial systems have to deal with potentially thousands of transactions per second, and if a leap second is thrown into the mix, any financial system might make an incorrect computation or even crash.

For that reason, many stock exchanges decided to shut down their trading systems for a few minutes before and after Tuesday evening’s leap second. Better to be safe than sorry. Bloomberg and Time Service Dept., U.S. Naval Observatory