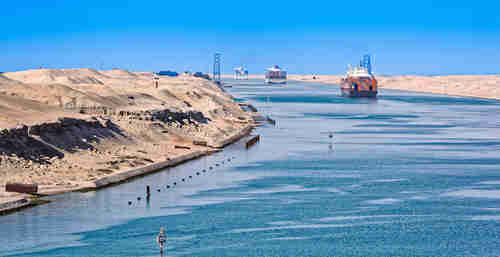 The ISIS-linked “Sinai Province” terrorist group sank an Egyptian navy ship in the Mediterranean Sea near Gaza and Sinai. They claim to have fired a rocket at the ship, setting it on fire and sinking. Some news reports confirm this, but the Egyptian military says that there was only an exchange of gunfire that caused the ship to catch on fire.

The attack comes just two weeks after Egypt said it was in a ‘state of war’ in northern Sinai, following July 1 when the same group conducted simultaneous coordinated terror attacks at 15 different locations in Sinai. According to Egyptian officials, at least 300 militants launched that offensive, of whom 100 were killed. The military said that 17 soldiers had been killed, but other reports put the death toll much higher.

The new attack appears to be a significant escalation by terrorists linked to the Islamic State (IS or ISIS or ISIL or Daesh). Daily Star (Beirut) and Al Ahram (Cairo)

What Egyptian officials most fear is a terrorist attack on a commercial vessel in the Suez Canal that forces the canal to close for a period of time. Last month, Egyptian authorities arrested 13 Muslim Brotherhood suspected of planting bombs around the canal. Last year there was a failed RPG (rocket-propelled grenade attack) on a vessel. If the attack had succeeded in hitting the bunker of a tanker, the canal would have been closed for a week for environmental cleanup.

Early in August, Egypt will announce the completion of a Suez Canal expansion project. The expansion will be the second channel along a portion of the canal, making two-way traffic possible in that portion. This will reduce the average transit time of vessels from 18 hours to 11 hours, and it will increase the number of vessels transiting the canal each day from 49 to 97.

There is another reason for the Suez Canal expansion project, a somewhat ironic one. The Muslim Brotherhood was involved in the original construction of the canal in 1936, giving them a rare understanding of the waterway and one they exploited to make the RPG attack. So the expansion project is altering the infrastructure, including tunnels, so the Brotherhood can’t use its knowledge of its inner workings to attack the canal. Helenic Shipping News and Journal of Commerce

Both Greece and Germany in political disarray after IMF bailout statement

As I wrote yesterday, the International Monetary Fund (IMF) has essentially thrown Europe under the bus, by declaring that Greece’s debt is “unsustainable,” and that the IMF therefore could not participate in a third bailout, unless the Europeans forgive and write off a large part of Greece’s existing debt. That IMF statement throws European negotiations over a new 80 billion euro bailout for Greece into disarray.

It focused the mind of Greece’s prime minister Alexis Tsipras. Greece’s economy is in desperate straits, with conditions as bad as the 1930s Great Depression. The average Greek is 40% poorer than five years ago. The unemployment rate is 25%, with youth unemployment at 50%. Tsipras realized that his and Greece’s situation was so desperate that he had to capitulate and accept whatever deal the Eurogroup offered it. But that also triggered the resignation of several of Tsipras’s ministers, especially after a third of the MPs Tsipras’s own far left Syriza party deserted him in the final vote. The result is that Tsipras will have to make widespread changes to his government, assuming his government can survive.

The IMF statement also gave more ammunition to Germany’s finance minister Wolfgang Schäuble, who has taken a hard line against simply bailing Greece out again. His position, which he repeated on Thursday, is that voters in Germany and some other eurozone countries will not accept reducing Greece’s outstanding debt, either by forgiving part of it or by extending the payments out for decades, since the voters will see that as rewarding Greece’s profligacy. The concern is that other countries, such as Italy, Spain, Portugal or even France, will get into trouble some day, and also demand that their debt be written off.

Schäuble claims that the only way to save the euro is to give Greece a “time out” for up to five years, meaning that Greece will return to the drachma or an IOU-based currency until the economy stabilizes, and then can return to the euro.

German Chancellor Angela Merkel is opposing any “time out” for Greece, and this has resulted in a split between Merkel and Schäuble, and also a split in Merkel’s conservative party, the Christian Democratic Union (CDU).

Just as Tsipras needed MPs from opposition parties to get the parliament to accept the Eurogroup deal on Wednesday, Merkel on Friday is expected to depend on votes from opposition parties to pass the approval of a bridge loan to prevent Greece from defaulting next week. The bridge loan of 7 billion euros is needed by Monday to allow Greece to make debt repayments to the IMF and the European Central Bank (ECB). The German parliament is expected to approve the bridge loan on Friday.

Greece got some additional good news on Thursday, when the ECB announced that it will again provide a limited amount of Emergency Liquidity Assistance (ELA), to last for a week. Greece’s banks have been closed for two weeks now, and this will permit them to reopen next week. However, there apparently will still be a limit of 60 euros per day in ATM withdrawals.

Once Monday arrives, the crisis will continue with chaotic negotiations over the new 80 billion euro bailout for Greece. But after the IMF has thrown Europe under the bus, and after Schäuble has said Greece has to have a “time out,” you should expect the shouting to continue. It’s not clear to me personally how it makes sense to negotiate a new bailout when the IMF is like the child who yelled that “the Emperor is naked,” leaving everyone else no choice but to face reality. Kathimerini and Reuters