Australia is preparing a new strategic blueprint that will twin increased military spending with closer ties to the U.S. in the troubled South-West Pacific. The plan will call for more U.S. naval ships, warplanes and ground troops to be based in the country.

Details were revealed by Defence Minister Kevin Andrews in a speech he gave Thursday in the national capital Canberra. Speaking to members of the local America Chamber of Commerce, Mr Andrews gave an outline of the 20-year, A$300 billion (US$214 billion) plan to boost the military, which will be detailed in a future white paper.

“Through this white paper, the government will seek to broaden and deepen our alliance with the United States, recognizing that the U.S. alliance will remain fundamental to our security and defence planning and the highest priority for our international cooperation,” Mr Andrews said.

Prime Minister Tony Abbott has promised to boost military spending to 2 per cent of gross domestic product (GDP) inside 10 years, with a military budget of A$32 billion next year and a cumulative A$132 billion over the next few years. If the new spending regime outlined by Mr Andrews continues he will reach that goal. 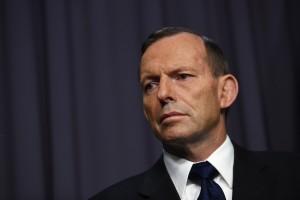 Australia’s Prime Minister Tony Abbott is on course to boost military spending to 2% of GDP.

Last year Australia ranked sixth globally in weapons imports, according to the Stockholm Institute for Peace Research, spending almost A$14 billion on arms.

A substantial part of that spending will go to a stronger blue water presence for Australia’s navy, including 12 new submarines, nine frigates and up to 20 offshore patrol vessels at a cost of A$89 billion. All will be built locally. Australia is also introducing new two amphibious carriers (pictured above is HMAS Canberra on trials) and three air warfare destroyers.

In the air, Australia has signed on for 72 F35-A Joint Strike Fighters for the Royal Australian Air Force (RAAF). The $12.4 billion price tag makes the F35 Australia’s most expensive defence asset. The government says it will also consider the option of buying another squadron of the next-generation fighter jets to eventually replace the RAAF’S F/A-18 Super Hornets.

Mr Andrews hinted this may be only the beginning of Australia’s increased ties with the U.S, building on what he labelled “the fundamental importance of the Alliance with the United States to Australia’s security and defence.”

In 2014 Australia and the U.S. signed a new Force Posture Agreement that will see 2500 Marines and dozens of U.S. warplanes and warships exercising and replenishing at Australian ranges and bases in the Northern Territory and at HMAS Stirling near Perth.

Talks are progressing for Australia to become part of America’s global ballistic missile shield that will focus on the rising tide of Islamic militancy in Iraq and Syria, the Ukraine and Afghanistan.

These moves come as China matches aggressive rhetoric with military action over its claim to almost the entire South China Sea and Australia’s neighbours in the Philippines, Vietnam, Malaysia and Singapore look for allies to stem that drive.

Australia’s strengthened military posture will go some way to helping balance China’s push while reassuring the U.S., a firm military partner for Australia for over a century, that the alliance is as strong as ever.