BUDAPEST,Hungary (Sep. 6) – Meet the self-styled ‘Aleppo Boys’. Pictured above, they are the collective face of mass immigration entering Europe from the Middle East. Their story is indicative of so many you can hear right now at Budapest Keleti railway station.

They are young. They are fit. They clearly know what they want. They have no intention of staying and fighting in Syria. Instead they have travelled overland through Lebanon, Turkey, Greece, Macedonia, Serbia and into Hungary. They say their last stop is Germany.

None of them wants to stay in Hungary or any of they countries they have transited. As one they see Germany as a future because Chancellor Angela Merkel told them so. Besides, Hungary police want to fingerprint them, check any travel documents and stop their progress as specified by EU regulations.

The Aleppo Boys want none of it. They understand why some of their compatriots broke out of a refugee camp on Friday night and decided to try and walk to Germany.

“No good here in Hungary. No good,” said their leader Muhammad. “They try and lock us up. But we want Germany, there it is good. We have to worry about nothing there. They give us food and house and job.

“Hungary just want to watch us all the time.”

Which is not to say they aren’t grateful. As one they seem tremendously happy and unfailingly polite. They are also in the majority amongst the thousands who arrive each day on their way north. 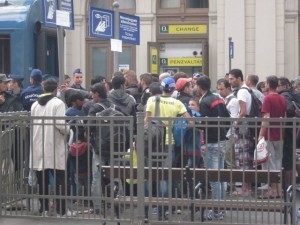 Yes, there are families in the throng at Keleti. Plenty with young children. But if you stand and take a rough count it is hard not to come to the conclusion that young men are in the overwhelming majority. They have been dressed by charity and have cash for tickets. They want to charge their iPhones, eat more pizza and board their trains.

The families sit in tight groups or they sleep underneath the station concourse waiting for their chance to leave. Local Budapest volunteers have delivered food and clothing, showing goodwill which the travellers are only too willing to accept.

Moving around the station the sheer scale of the tide of humanity now crossing Europe is apparent. I spoke to two young men from Bangladesh. There were Pakistanis and Sudanese. I even met a family from Nepal. Syrians are the highest number followed by Iraqis and some Jordanians and they all seem amply versed in the ways and means of securing a passage to Germany.

Social media is the one connecting link. Everyone either has an iPhone or knows someone else who does. They use them to talk to family members on the other side of the world or network with each other sharing information. It also helps them to know what lies ahead.

According to local police, up to 10,000 immigrants crossed the Austrian/Hungarian border over a 24- to 48-hour period after Budapest station was closed to all travellers on Friday afternoon due to the surge in numbers.

Around 1,500 spent Saturday night in Nickelsdorf waiting to be processed, half in the open air, the Austrian Red Cross said. Those left in Budapest heard the news and waited knowing that when trains resumed they would be ready to board them.

For the young men travelling on their own, there is safety in numbers but a deep suspicion of anyone who is not another fellow immigrant. Most do not want their photograph taken but if they agree, it is under the strict understanding their family name will not be included. 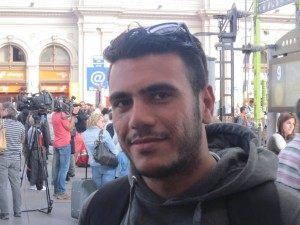 Ahmed has travelled overland from Syria to Budapest on his way to Oslo, Norway.

Like Ahmed (pictured right). He refused to let me have his family name. Ahmed, 21, just wants wants to get to Norway and settle in Oslo. He has also made the overland trip from Damascus in Syria, a journey he said cost around US$5,000. He was waiting to board a train to Vienna and when he arrives in Oslo he feels he will be safe.

He told me: “I want new life. I want to go to university. Make money. I want to work in a bank, be a banker. Bring my family.”

I asked why he didn’t stay and fight. His answer revealed he thinks there is nothing left to fight for.

“Oh no, no. There is no future there. I see babies and…” He makes a cutting motion across his neck. “I see families killed. Women die. All people killed who not want to work with terrorists… no future. Europe is the new hope for all of us.”

As Breitbart News has already reported from Budapest, nobody knows how many more are to follow across the Mediterranean, although it could be ‘uncountable millions.’

This is the future that awaits Europe today.