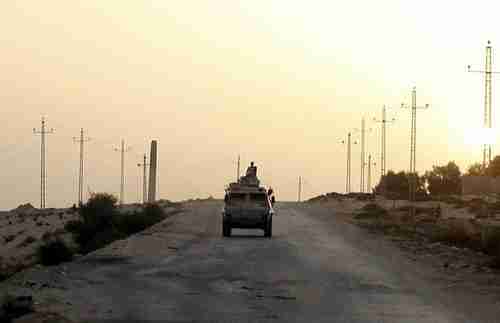 Egypt’s army has begun a new operation called “The Martyr’s Right” in North Sinai, and reports that 29 terrorists were killed on Tuesday, the first day of the campaign. The target was the terror group Ansar Bayt al-Maqdis (ABM – Ansar Jerusalem – Champions of Jerusalem), which has conducted numerous attacks in Egypt’s Sinai, along the border with Israel and Gaza, and last year changed its name to “Sinai Province,” meaning “Sinai Province of Islamic State,” when it repudiated its allegiance to al-Qaeda and declared its allegiance to the so-called Islamic State (IS or ISIS or ISIL or Daesh).

In July, Sinai Province conducted simultaneous coordinated terror attacks at 15 different locations in Northern Sinai, causing Egypt to declare that it was in “a state of war.” Shortly after that, Egypt’s military conducted a massive military operation against the group, and declared that it had brought the Sinai 100% under control.

The Martyr’s Right campaign is the largest military operation in North Sinai since then. According to Egypt’s Major general Mohamed Ali Belal, the operation is based on new information, and is supported by the Bedouin tribes in the area:

A comprehensive campaign has been launched based on an estimation of the situation and fresh information about many hideouts and targets. Such campaigns are undertaken with a clear plan… and with a timeframe. […]

Tribes largely support this operation, [but] tribes are not playing a direct role in the operation.

The operation comes days after the Sinai Province released a video documenting its attacks on the military in Sinai, including footage of a wire-guided missile strike that destroyed a navy vessel. ( “17-Jul-15 World View — ISIS-linked terrorists sink Egyptian navy ship amid Suez Canal expansion”.) That attack was seen at the time as a major escalation by the terrorists. Al Ahram (Cairo) and AFP

It is hard to think of any phrase that better describes what’s been going on in Turkey for the last few weeks other than “is descending into civil war.”

On Sunday, a roadside bomb attack in southeastern Turkey killed 16 Turkish soldiers, and another bombing on Tuesday killed 14 Turkish policemen. Both bombings are blamed on the separatist terror group Kurdistan Workers’ Party (PKK). Turkey and the PKK fought an off and on civil war for almost four decades, but finally agreed to a ceasefire in 2012. On July 20, there was a massive terrorist attack in the town of Suruç, and on July 23, Turkey declared war on PKK.

In response to the terror attacks, Turkey launched dozens of airstrikes on PKK camps in the Kandil mountains in northern Iraq for the first time since the 2012 ceasefire. Then on Tuesday, Turkish ground troops entered northern Iraq on Tuesday for the first time since 2011, conducting what an official termed a “short-term” operation to hunt PKK terrorists behind attacks on Turkish soldiers and police.

These attacks on northern Iraq have presented a problem for the United States, because the Kurdistan Regional Government (KRG) in northern Iraq, which governs the civilian Kurdish population in northern Iraq, and has been a U.S. ally in fighting against ISIS, has complained that the Turkish airstrikes are killing civilians. Zaman (Turkey) and VOA and Turkish Weekly

Violence spreads in cities across Turkey

The rapidly escalating conflict between PKK terrorists and Turkish security forces has triggered violence across Turkey. A number of anti-terror marches in Turkey turned violent when supporters of the pro-government Nationalist Movement Party (MHP) attacked the headquarters and local offices of the pro-Kurdish Peoples’ Democratic Party (HDP).

Dozens of demonstrators pelted the HDP headquarters in Ankara with stones, while in another city, an angry mob of 150 people set fire to four shops owned by Kurdish businessmen.

In another city, 500 people marched through a neighborhood populated by Kurdish seasonal workers, and began attacking homes and setting some on fire.

An incident that went viral was triggered when a Kurdish man posted on Facebook a picture of himself wearing the uniform of the peshmerga military force of the Kurdistan Regional Government (KRG), alongside the message, “It is an honor to wear this uniform.” The man was tracked down, beaten up, stripped, and forced to kiss a statue of Atatürk (the founder of modern Turkey). Hurriyet (Istanbul) and Bloomberg and Hurriyet

An angry mob of nearly 100 people tried to storm the Istanbul offices of the daily newspaper Hurriyet on Tuesday. They did not get past a police barricade, but they smashed windows with sticks and stones.

The attack was triggered by a complaint by President Recep Tayyip Erdogan that Hurriyet had tweeted a news story on Sunday that distorted his words. The story referred to the recent PKK terrorist attack that killed 14 police officers. Hurriyet quoted Erdogan as saying that the attack would not have occurred if Erdogan’s AKP party had won more Parliament seats in the recent elections.

The attack on Hurriyet’s offices was blamed on incitement by a group of internet trolls supporting the AKP. Zaman (Turkey) and Zaman

The anger and violence between nationalists and Kurds in cities across Turkey seems to be growing worse, and has done so steadily ever since Erdogan declared war on the PKK in July, ending the 2012 ceasefire.

I have been writing for many months that the Mideast is headed for a new sectarian and ethnic war, and particularly this year that the entire Mideast appears to be deteriorating into war. (See for example “19-Jul-15 World View — Behind the scenes in the Iran nuclear deal”.)

In just the past few days, we have seen the Yemen civil war escalate with the planned deployment of 1,000 Qatari troops, we have seen plans by Russia to deploy Russian troops to Syria, making it for the first time a war between Muslims and Christians, and we’ve seen the continuing flood of 11 million Syrian refugees into other countries, including the countries of Europe.

Now we have a new element — a growing war in Turkey between ethnic Turks and Kurds. This is part of the overall trend, and brings us another step closer to all out-war throughout the entire Mideast. Hurriyet (Turkey)