Russia warns that Syria war could become a ‘proxy war’ 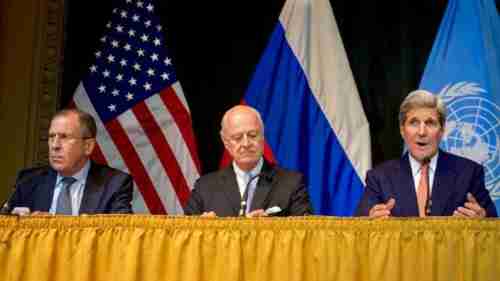 Russia has poured millions of dollars of heavy weapons into Syria, and is now sending in Russian troops to establish bases there. Recently, Russia launched 27 cruise missiles from the Caspian Sea to targets in Syria. Iran is pouring new troops into Syria. Iran has also given Lebanon’s Hezbollah terrorist group a great deal of money, and Hezbollah has sent thousands of troops into Syria to support Syria’s president Bashar al-Assad.

Al-Assad’s genocidal attacks on innocent Syrian Sunnis, killing hundreds of thousands and forcing millions from their homes, has caused Sunni jihadists from all of the world to fight against al-Assad, Russia, Hezbollah, and Iran in Syria. Along the way, these jihadists formed the so-called Islamic State (IS or ISIS or ISIL or Daesh).

And now, on Friday, Russia’s Foreign Minister Sergei Lavrov made a pronouncement that Barack Obama was going to trigger a “proxy war” in Syria by sending in 50 special operations forces, as we reported yesterday.

You can’t make this stuff up.

Thanks to Iran, Russia, al-Assad and Hezbollah, there are now tens of thousands of foreign troops fighting each other in Syria, with al-Assad in particular supported by massive amounts of foreign weapons.

But somehow, those tens of thousands of foreign fighters don’t make it a “proxy war,” but America’s 50 special forces troops do.

You can’t trust any garbage that comes out of Lavrov’s mouth, or out of al-Assad’s mouth, or out of Vladimir Putin’s mouth, but I listen to BBC, al-Jazeera, FOX, CNN, and other media sources all the time, and I see these news anchors report this crap with a straight face all the time. I don’t know whether it is more sickening to watch those fatuous news anchors, or to watch the fawning Secretary of State John Kerry suck up to Lavrov and Putin, which has happened in issues involving Ukraine, Iran’s nuclear development, and Syria.

All this verbiage is coming out of a meeting in Vienna whose purpose is to find a “political solution” to the Syria problem. With hundreds of thousands of Syrian migrants pouring into Europe, and with hundreds of ISIS militants returning to Russia to fight Putin, there is a lot of pressure to find a “political solution.” But this week’s announcement that Iran will fully enter the war in Syria on the side of the Syrian regime makes any “political solution” farther away than ever. On the contrary, Saudi Arabia and other Gulf countries will never agree to anything like the emerging situation. Actions by Russia and Iran, intervening militarily in Syria, is an emerging disaster, likely triggering a sectarian Sunni versus Shia war throughout the region. BBC and International Business Times and Reuters

In the 12 years that I’ve been doing this, I’ve posted about 4,000 articles with hundreds of Generational Dynamics predictions.

In 2011, when the Syrian civil war began, I said that the war should fizzle within a year or two. Of all the hundreds of Generational Dynamics predictions, this is the one where I’ve clearly been (depending on how you look at it) either wrong or poorly described.

Syria’s last generational crisis war was civil war that climaxed in 1982 with the massacre at Hama. There was a massive uprising of the 400,000 mostly Sunni citizens of Hama against Syria’s president Hafez Assad, the current president’s father. In February, 1982, Assad turned the town to rubble, 40,000 deaths and 100,000 expelled. Hama stands as a defining moment in the Middle East. It is regarded as perhaps the single deadliest act by any Arab government against its own people in the modern Middle East, a shadow that haunts the Assad regime to this day.

(As a related matter, the civil war in Lebanon also climaxed that year, with the bloody massacre at Sabra and Shatila occurring in September 1982. And it occurred as the Iran/Iraq war was ongoing, three years after Iran’s bloody Great Islamic Revolution in 1979. At that time, much of the Mideast was re-fighting World War I and the collapse of the Ottoman Empire, 60 years earlier.)

So, in 2011, I said that the civil war in Syria would fizzle, and could not turn into a crisis civil war. And that’s both wrong and true. There are too many survivors who remember the 1982 slaughter, and do not want to see it repeated. And so there’s been no massive anti-government uprising, as there was in 1982, and Bashar al-Assad’s Shia/Alawite troops have been fighting half-heartedly, with many soldiers defecting or deserting.

But the war did not fizzle.

It should have fizzled in 2011 or 2012, but Hezbollah and Iran starting pouring troops in to support al-Assad. And foreign fighters from around the world arrived to fight al-Assad and to form ISIS. That’s not something that Generational Dynamics could have predicted.

Earlier this year, it looked like al-Assad’s army was near collapse. In July, a desperate al-Assad gave a national speech in which he admitted he was losing. The war should have fizzled this year. But now, Russia and Iran are pouring tens of thousands more troops into Iran to bolster al-Assad. And that also is not something that Generational Dynamics could have predicted.

So the problem for me is: How should I have characterized the situation in 2011? The prediction that it wouldn’t turn into a crisis civil war was correct, but the war did not fizzle, because it turned into a proxy war.

Well, I don’t think there’ll be a next time, but if there is, I’ll try to characterize the situation differently, without simply using the word “fizzle.” NPR (1-Feb-2012)

I write about a number of civil wars going on in the world today, so this is a good time to discuss civil wars from the point of view of Generational Dynamics.

Among generational crisis wars, an external war is fundamentally different than a civil war between two ethnic groups. If two ethnic groups have lived together in peace for decades, have intermarried and worked together, and then there is a civil war where one of these ethnic groups tortures, massacres and slaughters their next-door neighbors in the other ethnic group, then the outcome will be fundamentally different than if the same torture and slaughter is rendered by an external group. In either case, the country will spend the Recovery Era setting up rules and institutions designed to prevent any such war from occurring again. But in one case, the country will enter the Awakening era unified, except for generational political differences, and in the other case, the country will be increasingly torn along the same ethnic fault line.

The period following the climax of a crisis war is called the “Recovery Era.” One path that the Recovery Era can take is that the leader of one ethnic group decides that the only way to prevent a new civil war is for him to stay in power, and to respond to peaceful anti-government demonstrations by conducting massive bloody genocide, torture and slaughter of the other ethnic group, in order to maintain the peace. (Dear Reader, I assume you’ve grasped the irony of the last sentence.)

For example, in a July article about Burundi, I described how Burundi’s Hutu president Pierre Nkurunziza was using such violence to quell Tutsi protests, supposedly to avoid a repeat of the 1994 Rwandi-Burundi genocidal war between Hutus and Tutsis.

As another example, in a June article about Zimbabwe, I described how Zimbabwe’s president Robert Mugabe was even worse. His 1984 pacification campaign was known as “Operation Gukurahundi” (The rain that washes away the chaff before the spring rain). During that campaign, accomplished with the help of Mugabe’s 5th Brigade, trained by North Korea, tens of thousands of people, mostly from the Ndebele tribe, were tortured and slaughtered. Later, Mugabe single-handedly destroyed the country’s economy by driving all the white farmers off the farms, resulting in one of the biggest hyperinflation episodes in world history.

That is what Bashar al-Assad is doing in Syria. Fearing a Sunni uprising, like the one in 1982, al-Assad is conducting a massive “peace campaign” by slaughtering and displacing millions of innocent Sunnis. As I wrote above, this should have fizzled in 2011 or 2012, but it’s turned into a proxy war, and it’s a disaster for the Mideast and the world.

But none of the above three examples is a crisis civil war. A crisis war has to come from the people, not from the politicians. So, for example, there’s a massive crisis civil war going on today in Central African Republic (CAR), between the Muslim ex-Seleka militias fighting Christian anti-Balaka militias.

Unlike the previous examples, CAR is in a generational Crisis era. CAR’s last generational crisis war was the 1928-1931 Kongo-Wara Rebellion (“War of the Hoe Handle”), which was a very long time ago, putting CAR today deep into a generational Crisis era, where a new crisis war is increasingly likely. That’s why the CAR is a genuine crisis civil war, and won’t fizzle out. In fact, it won’t end until it has reached some kind of explosive conclusion — of the kind we described in Hama or Sabra and Shatila. ( “2-Oct-15 World View — Violence resurges in Central African Republic crisis war”)

Generational Dynamics and war between Palestinians and Israelis

I’ll discuss one more example — not a civil war, but very similar to a civil war, with the same kinds of issues.

What I have been describing in numerous articles recently is that there is emerging a major, fundamental, historic change.

In the emerging situation, young people today are no longer willing to listen to these leaders. According to the CIA World Fact Book, 20% of Gaza’s population are in the 15-24 age range, and so are 21% of the West Bank — about 200,000 males in each territory, or 400,000 young males total.

On the Israeli side, there are over 600,000 young males in the same age range. There have been unconfirmed reports of young Israelis also disgusted with the leadership. It is possible that, like the young Palestinians, they are willing to take matters into their own hands.

So in this environment, what could happen next? The last three Gaza wars were non-crisis wars, but the next one could be a crisis war between Israelis and Palestinians.

How can a crisis war begin? How about if those 200,000 young male Gazans blow holes in the walls, pour across into Israel and start killing Israeli citizens en masse in their homes and villages? And how about if they are joined by those 200,000 young male Palestinians on the West Bank, who start with the Jewish settlers and continue with the Jews in Jerusalem. And how about if the young Israeli males strike back and start killing Palestinians in their homes and villages?

Israel’s tanks and bombers would not be of much use. You can’t bomb Jerusalem, and you can’t bomb Israeli villages and settlements to kill Palestinians.

That is the difference. That is what a generational crisis war is like. It is not two tanks shooting at each other. It is hand to hand combat in homes, neighborhoods and streets by people armed with sticks and knives. It is what happened in Central African Republic last year, it is what happened in Rwanda in 1994, in Bosnia in 1994, and in Palestine in 1947.

And by the way, that assumes that the bloody mess stays confined to Israel and the Palestinian territories. The Palestinians are likely to be joined by tens or hundreds of thousands from Jordan, Lebanon and Egypt.

The recent widely reported changes in the attitudes and behaviors of young Palestinians is a sign that this kind generational crisis war is coming.