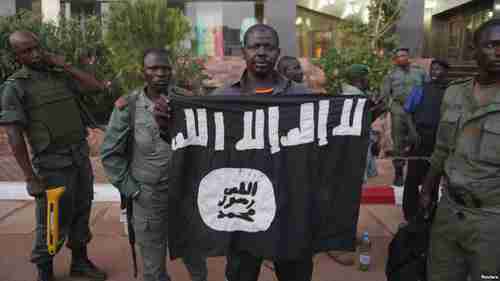 A group of terrorist gunmen assaulted the Raddison Blu Hotel, a luxury hotel in Mali’s capital city Bamako, on Friday morning, taking hundreds of hostages were taken. The hotel was hosting a Mali “peace process” conference, and so a number of diplomats were including among the hostages, along with numerous other guests and employees.

Malian troops swept through the hotel room by room, floor by floor, freeing hostages and pursuing the gunmen. They found the floors littered with the bodies of Malians and foreign visitors, including a Belgian government official. At least 20 people were killed.

At least two different terror groups have claimed responsibility on social media for the attack, Al Murabitoon and Ansar al-Din. Both of them are splinter groups associated with Al-Qaeda on the Islamic Maghreb (AQIM).

The fact that different groups are claiming credit on social media shows that, like many acts of terrorism including those in Paris this year, the terrorism has no strategic purpose other than as publicity and recruiting tools. CNN and Washington Post and Time

Despite claims by the so-called Islamic State (IS or ISIS or ISIL or Daesh) to be a worldwide caliphate, Friday’s attack in Mali shows that not only is al-Qaeda far from dead, but in fact may be getting energized by the recent successes of ISIS.

According to a US military assessment, ISIS has little or no influence in West Africa, as compared to al-Qaeda. According to Army Gen. David Rodriguez, chief of U.S. Africa Command:

The Islamic State does not have that kind of impact down in that area. [The Mali attackers are] probably someone associated with al-Qaeda in the Islamic Maghreb because, again, that is where they have the reach.

The ISIS-linked terror group Ansar Bayt al-Maqdis (ABM – Ansar Jerusalem – Champions of Jerusalem), which has changed its name to Al Wilayat Sinai (Province of Sinai), is believed to be responsible for the downing of Russia’s Metrojet Flight 9268 passenger plane over Sinai in Egypt.

But the “most deadly terrorist group in the world” is neither the whole of ISIS nor al-Qaeda. According to the Global Terrorism Index from the Institute for Economics and Peace it is Boko Haram, which has exceeded ISIS write large and all other groups in “murder, torture and rape,” and in the number of terror-related deaths. Boko Haram recently changed its name to Islamic State West Africa Province (ISWAP) and is now a subsidiary of ISIS. The study in question was conducted before that change, however.

Boko Haram has waged an insurgency in Nigeria since 2009 in its bid to create a mini-state under Islamic law. It has forced at least 2.6 million people from their homes, killing at least 17,000 people and abducting hundreds, including the 276 schoolgirls kidnapped in Chibok village in April last year that prompted an international outcry. As of April, a year after their kidnap, 219 of the Chibok schoolgirls remained missing. A group of around 50 managed to escape. Military Times and Sun News Online (Lagos) and Washington Post