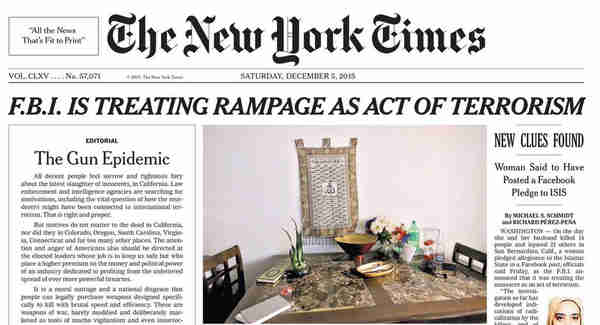 As I have written several times, the National Rifle Association should present an award to President Obama for his endless threats to impose gun control, because each time he does so, sales of guns and ammunition surge. Based on my conversations with gun owners, they do this because:

Now, the New York Times, which never misses a chance to suck up to the Obama administration, is going even farther than Obama by writing an editorial that encourages the government to confiscate guns:

Certain kinds of weapons, like the slightly modified combat rifles used in California, and certain kinds of ammunition, must be outlawed for civilian ownership. It is possible to define those guns in a clear and effective way and, yes, it would require Americans who own those kinds of weapons to give them up for the good of their fellow citizens.

What makes this editorial newsworthy is that it appears at the top of page 1. The last time the NY Times had a page 1 editorial was on June 13, 1920, expressing disapproval of Warren G. Harding’s nomination as the next Republican presidential candidate.

Nobody opposed to gun control, least of all gun owners, is going to care what the NY Times thinks, so all this is going to do is sell a lot more guns. I wonder if the NY Times editors own stock in gun companies?

The Washington Post wrote its own editorial, “The folly of the New York Times pleading for gun control on page 1,” saying the following:

Republicans have relentlessly accused the “mainstream media” (of which the Times is a flagship member) of advancing a liberal agenda. What they often fail to recognize — or deliberately ignore — is the separation of news and opinion. They’ll read a column, blog or editorial that is critical of their policies and then angrily tell supporters that they can’t get a fair shake in straight news reports. Most of the time, their complaints are unfounded or greatly exaggerated.

In this case, however, the Times has (at least temporarily) knocked down a wall by placing an editorial in a spot normally reserved for news. That does not mean the paper’s political reporters will suddenly abandon all sense of fairness as they cover candidates who staunchly back gun rights. But it does give those candidates new cause for suspicion — a cause they will almost certainly exploit on the campaign trail.

You don’t have to be a Republican to see pretty clearly that the NY Times reporters are fawning lapdogs for President Obama, or that President Obama’s political agenda is never separate from “news” on the NY Times front page, so in that sense the new editorial isn’t much different than a NY Times “news” story. But the WaPost editors are right about one thing: The NY Times has given President Obama’s opponents a new weapon on the campaign trail – a page one editorial urging the confiscation of some gun owners’ guns – and they are going to point to this NY Times editorial over and over.

And of course, that is just going to cause more people to buy guns, which obviously is perfectly OK with all these liberals, because they will get more money for their organizations. NY Times and Washington Post and Politico

In a television interview on November 10, Israel’s prime minister Benjamin Netanyahu was asked whether Israel would intervene in Syria. His reply:

In particular, Netanyahu has repeated his threat to use airstrikes to take out any Syrian regime convoys traveling from Syria to Lebanon that are suspected of carrying sophisticated weapons to Hezbollah.

A lot has happened in the four weeks since Netanyahu made that statement. Turkey’s warplanes shot down a Russian Su-24 bomber on November 24, and Russia has responded savagely against Turkey, with massive sanctions and by bombing every possible Turkish target in Syria, especially Turkmen enclaves. In addition, Russia is implementing a massive military buildup in Syria, with a sophisticated S-400 air defense missile system that can “see” any Turkish, American or Israeli planes, and destroy them if desired. ( “29-Nov-15 World View — Russia’s military buildup a game-changer in Syria”)

However, Israel has continued to conduct numerous airstrikes on Syrian regime targets within Syria.

These Israeli airstrikes in Syria have received no known objections from Russia, even though they are striking at Russia’s ally, the regime of Syria’s president Bashar al-Assad, as well as al-Assad’s ally, Hezbollah.

Last week, a Russian warplane entered Israeli airspace but, unlike a similar situation in Turkey, the warplane was not shot down.

Israel’s defense minister, Moshe Ya’alon, said that after the November 24 shootdown of Russia’s warplane by Turkey, Israeli prime minister, Benjamin Netanyahu met with the Russia’s president, Vladimir Putin, and agreed to open a channel for coordination between them “to prevent misunderstandings.” According to Ya’alon, “The jet penetrated about a mile into our territory. We established radio contact with it and it immediately returned to Syrian airspace.”

Ya’alon added a comment that sounded fairly snarky, following the incident in Turkey:

Russian planes don’t intend to attack us and therefore there is no need to automatically, even if there is some kind of mistake, shoot them down. […]

This is somewhat surprising, especially after a senior IDF officer said on Friday:

In our worst nightmares, we never dreamed we would have the S-400 system in our backyard with Syria, or that there would be cruise missiles here,” the member of the General Staff told Israeli defense correspondents at a briefing this week, the Walla website reported.

[But, the IDF] does not currently view the S-400 as a threat to Israel.

Nonetheless, Ya’alon’s statement indicates that airstrikes that Israel has made in the last couple of weeks, with targets belonging to Syria’s al-Assad regime and Hezbollah, have the tacit approval of Russia, by agreement, at least for the time being.

According to Debka’s subscriber-only newsletter (sent to me by a subscriber), Israel and Russia have a secret deal:

In a weird quirk of the Syrian conflict, all foreign air traffic flying over Syria has been suspended excepting over its eastern edge, but for Russian and Israeli warplanes. The US, Britain, France and Turkey initially discontinued their air strikes when Russia posted the fearsome S-400 anti-air missile system Syria in the wake of the downing of its warplane by Turkey.

This week, some Western air strikes were resumed, but only after circling around to strike from the east.

Even Bashar Assad takes care to consult the Russians before ordering aerial missions.

DEBKA Weekly’s military sources report that Israel received the personal go-ahead from President Vladimir Putin to carry out air strikes over Syria without fear of interference by Russian missiles or jets.

I like to reference Debka’s newsletter, which is written from Israel’s point of view, because they have military and intelligence sources that provide valuable insights. However, it is not unusual for them to get things wrong.

With that caution, the Debka newsletter also says that Barack Obama and Vladimir Putin also have a secret deal about handling Syria and Iraq:

Presidents Barack Obama and Vladimir Putin reached a quiet agreement in November to split up between the US and Russia the northern Syrian-Iraqi front against the Islamic State. […] The two halves are populated almost entirely by Kurds and hinge heavily on their coveted fighting prowess.

Divided by the Euphrates, the two leaders assigned all Kurdish areas in Syria and Iraq east of the river valley to the US and the Kurdish districts to the west, to Russia.

Turkish President Tayyip Erdogan will be more apoplectic than ever over this secret deal, which undoubtedly boosts Kurdish separatist aspirations, especially in Syria. […] Russian sponsorship of the Kurds will no double promote the merger of the three Kurdish enclaves into a single national entity.

Assuming that these reports are true, then Russia is pretty much running the show in Syria and Iraq, Israel and the United States are going along, as is Iran, and Turkey is being shut out.

Long-time readers will recall that I’ve been writing for years that Generational Dynamics predicts that Iran, Russia and India will be American allies in the next world war, with enemies that include China, Pakistan and the Sunni Muslim countries. (See for example “9-Nov-15 World View — Political crisis in Iran grows over nuclear agreement”) Step by step, week by week, that prediction is coming true. Guardian (London, 29-Nov) and Times of Israel (4-Dec) and Times of Israel (4-Dec) and Al Monitor (2-Dec) and Al Monitor (2-Dec) and Debka