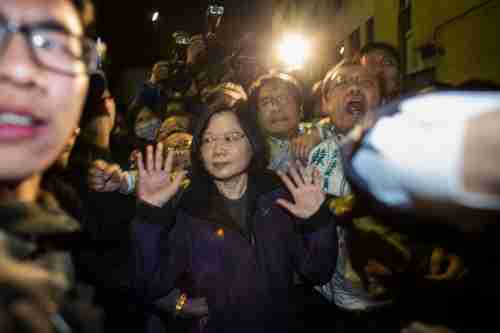 There is one and only one country in the entire world that agrees with and supports all of China’s legal claims in the South China Sea. That country is Taiwan, though China says that Taiwan is not a country, but only a rogue province of China that will return to Chinese control as soon as possible.

For the last few years, Taiwan has been governed by the pro-China Kuomintang (KMT) party, which favors the “one China” principle and unification with mainland China, and which has fully supported all of China’s claims in the South China Sea.

But Taiwan is about to hold new elections on January 16, and the KMT party is expected to lose to the pro-independence Democratic Progressive Party (DPP). Of Taiwan’s two major political parties, China has always been very friendly with KMT, and very hostile with DPP. China has frequently threatened military action if Taiwan’s leaders take any political steps towards independence from China, and those threats have almost always been directed at the DPP.

From a generational point of view, the supporters of the KMT are mostly older generations, including the remaining survivors of Mao Zedong’s bloody Communist Revolution civil war that climaxed in 1949. The supporters of DPP tend to be in the younger generations who have no personal memories of the Communist Revolution, and who are increasingly distant from mainland China as the years go by. As the older generations die off, Taiwan’s people are likely to support independence more and more each year, which could well trigger a military invasion China.

Tsai Ing-wen, the DPP leader and likely next president of Taiwan, has not specifically said that she would oppose China’s claims. In fact, she has carefully avoided stating what her policy will be with respect to the South China Sea when she takes office in May, four months after the election.

However, DPP statements in the past have taken the position that the South China Sea disputes have to be handled peacefully, according to international law, namely the United Nations Commission on the Law of the Sea (UNCLOS) convention. This would require the disputes to be submitted to the United Nations international court in the Hague, something that China has bitterly refused to do. Taipei Times and Lawfare Blog and Focus Taiwan and Taipei Times (27-June-2015)

The government of Burundi is responding angrily to an African Union proposal to send 5,000 peacekeepers to Burundi, saying it would be “an attack” on Burundi.

International officials are becoming increasingly alarmed that Burundi will see a repeat of the 1994 genocidal war between Hutus and Tutsis in Burundi and Rwanda that led to the slaughter of almost a million Tutsis in a three month period. The U.S. special envoy to Africa’s Great Lakes Region, says that in Burundi he could feel a “palpable sense of fear or concern” on the streets. According to Perriello:

I think you see across the region and across the world a much greater sense of needing to come together to solve this thing — that the fears of a civil war are very real, we still have time to stop it, and the people of Burundi still want to get back to that decade of progress of post-conflict reconciliation.

The African Union’s Peace and Security Council stated that “Africa will not allow another genocide to take place on its soil.”

As I’ve written many times, there is no chance whatsoever of a repeat of the 1994 war because there are too many survivors of that war, and they won’t allow it to happen. What’s happening instead is that Burundi’s president Pierre Nkurunziza, whose announcement last spring that he would run for an unconstitutional third term triggered the violence, has been following in the path of Zimbabwe’s Robert Mugabe and Syria’s Bashar al-Assad by conducting genocidal violence against his own people in order to stay in power.

The worst violence so far occurred last week in the capital city Bujumbura, when Nkurunziza’s security forces killed over 80 people, and left their corpses piled in the streets, to be discovered by ordinary homeowners when they woke up in the morning and looked out their windows.

It’s possible that the proposed African Union 5000 man peacekeeping force could turn Burundi into another Syria, where external forces turn a civil war that might otherwise fizzle into an international proxy war. Nkurunziza’s opposition has been calling for a peacekeeping force, Nkurunziza himself has said any such peacekeeping force would be an “attack,” suggesting he would order his military to respond, repeating the Syria scenario.

What happened in Syria was that peaceful protests in 2011 were met by the Bashar al-Assad regime with genocidal attacks on innocent Sunnis, using heavy weapons obtained from Russia and even Sarin gas. Sunni jihadists from almost 100 countries around the world poured into Syria to fight al-Assad, and they ended up forming the so-called Islamic State (IS or ISIS or ISIL or Daesh).

Hutus and Tutsis are almost entirely Christian, so it would seem to be unlikely that Sunni jihadists would identify with either side in Burundi. However, it is possible that an al-Qaeda linked or ISIS-linked terror group might take advantage of the chaos in Burundi and conduct terror attacks, in the same way that they have in in Paris or San Bernardino or other places. Foreign Policy and VOA and IRIN (United Nations)