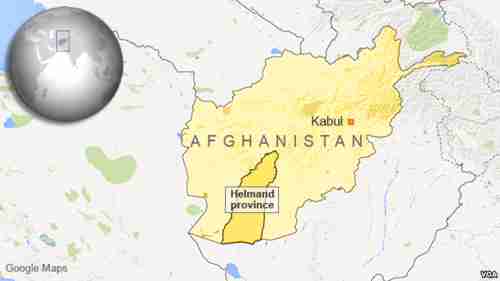 Defense Secretary Ashton Carter paid a surprise visit on Friday to a remote army base near Jalalabad in eastern Afghanistan, and warned of the threat of deteriorating security in Afghanistan from a resurgent Taliban and a growing number of fighters allied with the so-called Islamic State (IS or ISIS or ISIL or Daesh).

The warning comes after a year that saw Afghan army and police suffer more than 5,000 casualties. U.S. commanders estimate that ISIS has 1,000 to 3,000 fighters here, many of whom apparently are former Taliban members who shifted allegiance.

Carter’s remarks reflect a major new Pentagon report on the war in Afghanistan, which states:

In the second half of 2015, the overall security situation in Afghanistan deteriorated with an increase in effective insurgent attacks and higher ANDSF [Afghan National Defense and Security Forces] and Taliban casualties. Though the insurgency remains resilient, the Afghan government remains in control of all major population centers and continues to deny the Taliban strategic ground throughout the country. The Taliban have remained active in their traditional strongholds, namely in Helmand in the south and Logar and Wardak in the east, and also created a sense of instability for brief periods of time in other parts of the country, such as in Kunduz in northern Afghanistan. Nonetheless, the Taliban were unable to hold territory they had wrested away from ANDSF control. The ANDSF consistently retook ground they had temporarily lost to the Taliban. Although the ANDSF maintain a significant capability advantage over the insurgency, insurgents are improving in their ability to find and exploit ANDSF vulnerabilities, making the security situation still fragile in key areas and at risk of deterioration in other places.

As stated below, even this assessment is being challenged by the governor of Helmand province as being far too optimistic, and this may force a further retrenchment in Obama’s withdrawal plan, which has been repeatedly revise since Obama’s original commitment of total withdrawal in 2014. In the latest version of the withdrawal plan, the US will maintain its current force of 9,800 in the country through 2016, and after that will leave a force of 5,500 troops in place to train Afghan forces and conduct counter-terrorism missions. LA Times and DOD Dec 2015 report on Afghanistan (PDF) and Long War Journal

The Taliban have been defeating Afghanistan’s National Army (ANA), taking over districts in Helmand province, and appear close to a victory that will give them control of the entire province. In the latest victory, on Sunday, Taliban forces have taken control of the Sangin district, and claim to have surrounded around 150 fleeing ANA soldiers.

During a Taliban assault on Sangin in November, more than 60 Afghan soldiers were killed while another 70 defected to the insurgency. The crucial district had been one of the deadliest places in Afghanistan for NATO troops who fought for years to secure the volatile poppy growing region.

Sunday’s Taliban victory came after a desperate plea appeared on the Facebook page of Deputy Governor Mohammad Jan Rasulyar, writing to Afghanistan’s president, Ashraf Ghani. Rasulyar said that he knew of no other way to contact the government in Kabul, and wrote:

Your Excellency, Helmand is standing on the brink and there is a serious need for you to come. Be quick and act on this! Please save Helmand from tragedy. Ignore those liars who are telling you that Helmand is secure. …

Helmand will collapse to the enemies and it’s not like Kunduz, where we could launch an operation from the airport to retake it. That is just impossible and a dream.

The reference to Kunduz indicates that the situation is similar to the situation that led up to the fall of the northern city of Kunduz in late September, when Taliban fighters seized and held on to for several days before government troops regained control. ( “29-Sep-15 World View — Afghan Taliban capture of Kunduz has major repercussions for Central Asia”)

The desperate plea highlights the dangers faced by the Afghan government as the US-led coalition withdraws from the country. The Ghani government has been claiming that the Afghan security forces have been controlling the insurgency, but a series of Taliban victories have put that claim in doubt.

In fact, there have been unconfirmed reports in the last week that the US has once again been committing troops to Helmand, and that there are more American troops fighting there than at any time since President Obama last year announced a formal end to combat operations in Afghanistan. According to the NY Times:

The extent of the American role has been kept largely secret, with senior Afghan officials in the area saying they are under orders not to divulge the level of cooperation, especially by Special Operations forces on the ground. The secrecy reflects the Pentagon’s concern that the involvement may suggest that the American combat role, which was supposed to have ended in December 2014, is still far beyond the official “train, advise and assist” mission.

This is the latest in a series of escalations that have forced the Obama administration to repeated renege on its commitment to remove American forces by the end of 2014. VOA and Reuters and Independent (London) and NY Times

In fact, it was just six years ago this month that President Obama gave a speech at West Point announcing the troop “surge” in Afghanistan:

As cadets, you volunteered for service during this time of danger. Some of you fought in Afghanistan. Some of you will deploy there. As your Commander-in-Chief, I owe you a mission that is clearly defined, and worthy of your service. And that’s why, after the Afghan voting was completed, I insisted on a thorough review of our strategy. Now, let me be clear: There has never been an option before me that called for troop deployments before 2010, so there has been no delay or denial of resources necessary for the conduct of the war during this review period. Instead, the review has allowed me to ask the hard questions, and to explore all the different options, along with my national security team, our military and civilian leadership in Afghanistan, and our key partners. And given the stakes involved, I owed the American people — and our troops — no less.

That was in December 2009, the same month that Obama went to Oslo to accept his Nobel peace prize, and then went on to Copenhagen to give a speech to a farcical climate change conference.

Indeed, people on the right have been bitterly criticizing Obama’s strategy from the day it was announced. By giving an 18-month deadline, Obama was giving the enemy a huge strategic advantage, since they could plan their military campaign based on Obama’s unilateral withdrawal announcement. And Obama has been repeatedly criticized for ignoring and overriding the recommendations of his own army generals, even though Obama has no clue what’s happening in Afghanistan.

A worse irony is that President Obama’s Afghan war strategy is modeled after President Bush’s “surge” strategy in Iraq, something that Senator Obama bitterly opposed before it turned out to be successful. However, I wrote a detailed comparison of the Afghanistan versus Iraq wars in mid-2009 in “American army general warns of imminent defeat in Afghanistan war,”, showing that the Iraq “surge” strategy could not work in Afghanistan.

As I described at length in that article, there are important differences between Iraq and Afghanistan. Iraq’s previous generational crisis war was and external war, the Iran/Iraq war of the 1980s, where Sunni and Shia populations were united to defeat the Iranian enemy.

An even worse difference is that Afghanistan is right next door to Pakistan, which is in a generational crisis era. As I pointed out at the time, ethnic Pashtun Taliban in Afghanistan and Pakistan would cooperate with each other, and that’s what happened, as Taliban forces in Afghanistan conduct attacks and then flee across the border, where they’re safe from Afghan government forces. No such similar situation existed in the Iraq “surge,” as I described in my 2007 article, “Iraqi Sunnis are turning against al-Qaeda in Iraq”. Obama’s surge strategy is failing for precisely the reasons that I detailed in 2009, based on a Generational Dynamics analysis. White House (1-Dec-2009) and CS Monitor (2-Dec-2009) and CNN (22-Jun-2011)