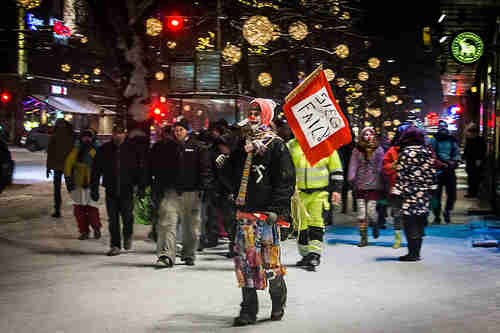 Clown carrying sign ‘Sieg Fail’ to make fun of Soldiers of Odin, whose leader is a neo-Nazi

A group of clowns has taken to the streets of the town of Tampere in Finland to make fun of a new group of anti-migrant vigilantes called the “Soldiers of Odin,” named after a war-like Norse god.

The vigilante group was formed late last year in the northern Finland town of Kemi, near the point on the border which has become an entry point for migrants arriving from Sweden. They wear black jackets, and run street patrols carrying carry signs saying things like “Migrants not welcome.” Police have received complaints that they have approached migrants, and also citizens whom they have accused of being migrants, and harassed them and threatened them with violence.

After the recent reported incidents of hundreds of alleged sexual assaults by Muslim migrants in Cologne on New Year’s Eve, The Soldiers of Odin have spread to other towns, and similar groups have sprung up in other countries. Most Finns oppose them, but they have received qualified support from the nationalist Finns Party, and they have been increasing in popularity since the New Year’s Eve incidents.

In the Finnish town of Tampere on Saturday night, the Soldiers of Odin street patrols were met by a group of clowns calling themselves the “LOLdiers of Odin,” where LOL stands for “laughing out loud.”

The vigilante group named themselves after the mythical Norse god Odin who was highly war-like. However, Odin did not end well. At the time of the cataclysmic Ragnarök between the giants and the gods, Odin fought with the enormous wolf Fenrir. Fenrir killed Odin and swallowed him. Fenrir also swallowed the earth and sun. After the Ragnarök ended, everything was destroyed, and the world had to be recreated. Think of it as the mythological analog to World War III. Helsinki Times and BBC and Helsinki Times and Daily Sabah (Turkey) and Encyclopedia Mythica

The European Central Bank saves the stock markets for another day

After several days of frightening plunges in markets in Asia, Europe and North America, things settled down a bit on Thursday after Mario Draghi, the president of the European Central Bank (ECB), suggested that massive new quantitative easing (QE) would begin again in March, and that there will be “no limits” to how far he will go.

There have been trillions of dollars of “printed money” in the form of quantitative easing from central banks around the world, including the ECB, the Bank of England, the Federal Reserve, and the Bank of Japan. However, this tsunami of money has only ended up in the accounts of banks and hedge funds, and it has pushed up stock markets well into bubble territory. As these bubbles now seem to be imploding, the ECB has promised more and more liquidity to try to keep them blown up. The Bank of Japan is preparing to boost currency stimulus next week.

One side effect is that the US dollar continues to get stronger and stronger. This is related to the fact that the Fed has ended its QE program. Thus, after Draghi’s announcement, the value of the euro fell 0.3% against the dollar, while the yen fell 0.2%. Both currencies are set for their biggest weekly drops this year.

However, these desperate attempts to keep the bubbles from imploding may be nearing an end, according to William White, the Swiss-based chairman of the OECD’s review committee and former chief economist of the Bank for International Settlements (BIS). According to White:

The situation is worse than it was in 2007. Our macroeconomic ammunition to fight downturns is essentially all used up. […]

Debts have continued to build up over the last eight years and they have reached such levels in every part of the world that they have become a potent cause for mischief.

According to White, combined public and private debt has surged to all-time highs to 185% of GDP in emerging markets and to 265% of GDP in the OECD countries, both up by 35 percentage points since the beginning of the last financial crisis in 2007.

European banks have already admitted to $1 trillion of non-performing loans: they are heavily exposed to emerging markets and are almost certainly already rolling over further bad debts that have never been disclosed.

According to White, who predicted the 2007-2008 financial crisis:

It will become obvious in the next recession that many of these debts will never be serviced or repaid, and this will be uncomfortable for a lot of people who think they own assets that are worth something.

The only question is whether we are able to look reality in the eye and face what is coming in an orderly fashion, or whether it will be disorderly. Debt jubilees have been going on for 5,000 years, as far back as the Sumerians.

Well, if we are depending on politicians who “are able to look reality in the eye and face what is coming in an orderly fashion,” then we should expect the worst. Bloomberg and Telegraph (London)