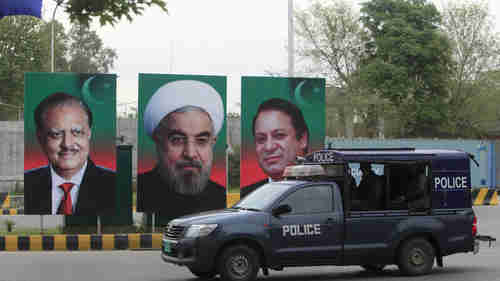 Flush from having economic sanctions lifted, thanks to last year’s nuclear deal with the West, Iran is anxious to move as quickly as possble to increase trade ties with regional neighbors. Thus, Iran’s president Hassan Rouhani paid a visit on Friday to Islamabad, the capital city of Pakistan, and met with Pakistan’s prime minister Nawaz Sharif.

The two agreed on plans to increase trade, and to complete a $7.5 billion Iran-Pakistan gas pipeline whose development was halted because of the sanctions. Iran is interested in Pakistani textiles, surgical goods, sports goods and agricultural products.

Iran and Pakistan attempt to erase 40 years of sectarian hostility

Pakistan has always had close ties with Saudi Arabia, and so its ties with Iran have been strained because of the recent hostility between the two countries, especially after the Saudi embassy in Tehran was stormed and firebombed in January. Pakistan has tried to remain neutral in this dispute, and can point to the fact that it has refused to provide military support to the Saudis in their proxy war with Iran in Yemen. Pakistan has diplomatically supported the Saudis in that war, but when called upon by the Saudis to provide troops, they refused, angering the Saudis. ( “18-Jan-16 World View — Pakistan tries to mediate between Saudi Arabia and Iran”)

However, the hostility between Pakistan and Iran goes far deeper than just a split triggered by the Yemen war.

Following World War II, Iran and Pakistan were generally secular states, with little Sunni-Shia hostility. But this began to change abruptly in the late 1970s.

In Pakistan in 1977, the sectarian government of Shaheed Zulfikar Ali Bhutto was overthrown in a bloodless military coup by Sunni General Zia-ul-Haq, who then executed Bhutto two years later.

In 1979, Russia invaded Afghanistan, viewed as a mostly Christian army invading a Muslim country. This energized Zia and allowed him to form militias to fight the Russians. These militias later became the Taliban.

These three events moved Pakistan and Iran in opposite sectarian directions, and hostility between the two countries has been growing.

In recent years, there have been numerous clashes along their common border. Two branches of the Pakistani Taliban, Jundullah (Soldiers of God) and Jaish-ul-Adl (Army of Justice), have committed themselves to the extermination of all Shias, and have conducted numerous terrorist acts on Iranian soil. Iran has repeatedly accused Pakistan of supporting these terrorist groups and attacks, an accusation that Pakistan’s government denies.

So terrorism was a major theme of Rouhani’s visit to Pakistan, as he said:

It is the will and the resolve of the two countries to firmly combat against extremists and the terrorist groups not to allow them to threaten our shared borders.

This appears to be one of those situations where two nations avoid potential war by building up trade, so that any war would be bad for business. But as usual, the opposite will almost certainly turn out to be true. Some incident will cause Iran and Pakistan to renew hostilities, and one of the first hostile acts will be a trade boycott on one side or the other. Trade is never an impediment to war, only an additional weapon of war.

The other in play here is that Iran has very good relations with India, as Hindus and Shia Muslims have been allied against Sunni Muslims in numerous wars as far back as the 680s decade. That alliance surpasses any ephemeral business dealing when it comes to choosing sides.

As I’ve written many times (see “15-Jul-15 World View — Arab views of Iran nuclear deal”), Generational Dynamics predicts that in the approaching Clash of Civilizations world war, the US, India, Russia and Iran will be allies, and China, Pakistan and Saudi Arabia will be allies. Deutsche Welle and Tasnim News (Iran) and Diplomat (23-Oct-2014) and Dawn (Pakistan, 6-Jul-2012)