John Kerry instructs Afghanistan officials how to run their government 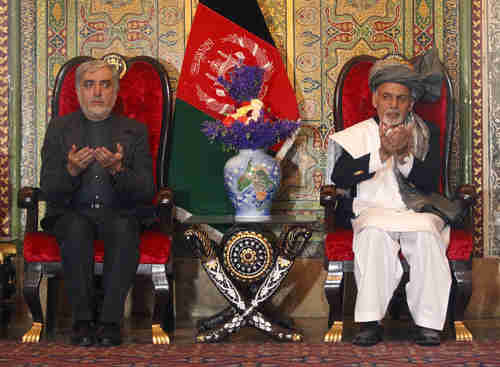 This is another one of those stories where all I can do is shake my head because after seven years of being in office, President Obama still thinks he is the smartest person in the room — any room — or the world, but still has absolutely no clue what is going on in the world. His Secretary of State John Kerry believes that US armed forces are worse than Nazis.

So now John Kerry, who has stumbled from one foreign policy disaster to another, paid a surprise visit to Afghanistan on Saturday. The nominal purpose of the visit was to head off a political crisis that could damage US withdrawal plans, so he demanded that the government renege on a 2014 agreement to replace the current government in September.

Afghanistan’s presidential elections in 2014 resulted in bitter disputes between the two leading candidates, Ashraf Ghani and Abdullah Abdullah, including accusations of massive voter fraud on both sides. The US brokered an agreement for a “unity government” of the two candidates, with Ghani becoming president and Abdullah in the newly created post of chief executive.

The text of the agreement called for a “loya jirga” (grand assembly) to be called in September 2016, at the end of two years. The loya jirga would decide the future of the government and amend the constitution, as such assemblies have done at key points in Afghanistan’s recent history.

So the purpose of Kerry’s visit to Afghanistan on Saturday was to tell the Afghan politicians and the Afghan people that they should not hold a loya jirga. He said that, despite the agreement calling for it, the loya jirga was “a goal,” not a requirement:

Let me make this very, very clear, because I brokered the agreement, President Ghani signed it and Chief Executive Abdullah signed it, and I was there to witness the signing, and I had the privilege of joining them in announcing it. There is no end to this agreement at the end of two years or in six months from now. This agreement ends – this is an agreement for a unity government, the duration of which is five years. …

But we are – in no way does the agreement itself have some particular termination. The constitution has elected a president. The president has agreed to a unity government, and a political agreement was made between Dr. Abdullah and President Ghani for how they would go forward in a unity government. But it is our understanding that that is a mandate for five years and there’s no termination whatsoever in six months.

So there you have it. John Kerry brokered the deal, so he knows what it means better than the Afghan politicians do, since they merely signed it. We will have to see whether Kerry’s visit did the job, or whether it infuriated the opposition so much that it made a loya jirga even more likely.

Kerry also repeated an offer to the Taliban for peace talks, which is laughable. LA Times and Washington Post (29-Mar) and BBC and Dept. of State

Troubles mount for Afghanistan government as US withdrawal looms

The fact that Afghanistan has had no government since 2014 is just one of the country’s problems. The economy has been sinking and, perhaps worst of all, the resurgent Taliban are stronger than at any time since they were toppled from power in late 2001.

In October of last year, President Obama reversed himself on the Afghanistan troop withdrawal. Instead of a total withdrawal, he announced that a residual force of 5,500 troops would be left on a continuing basis. This was only the latest of several similar reversals. He was forced into this because many people believe that the Obama’s total withdrawal from Iraq squandered the victory won by President Bush via the 2007 “surge,” and because Obama’s own “surge” strategy in Afghanistan has been a failure, as I predicted in 2009 that it would be, based on a Generational Dynamics comparison of Iraq and Afghanistan.

Analysts give three reasons for the resurgence of the Taliban in 2015:

The viability of Afghan’s military is further in doubt as a new report by CNN that desertion is rife, as Afghan soldiers defect to the Taliban. According to one deserter: “I decided to leave the army when my dead and injured comrades lay in our base, and nobody took them to hospital. My army training is very useful now, as I am training Taliban fighters with the same knowledge.”

Government troops suffered huge losses in 2015. U.S. officials estimate that 5,500 Afghan security force members died that year alone, far more than the 3,500 Nato lost in its entire decade-long campaign. As the “fighting season” approaches in the summer, the fear is that losses in 2016 will be even greater.

The remaining Nato forces are increasingly being deployed in battle zones to support Afghan forces fighting the Taliban. Afghanistan’s government is requesting (perhaps begging) that the US cancel its withdrawal plans, or even to bring in new troops. With President Obama concerned with little else beyond his legacy, this is something that he is unlikely to approve, unless the situation in Afghanistan gets so bad over the summer that he has no choice. That may in fact happen. Reuters and CNN and BBC (5-Jan)