Report: Israel and Saudi Arabia are allying against Iran and Hezbollah 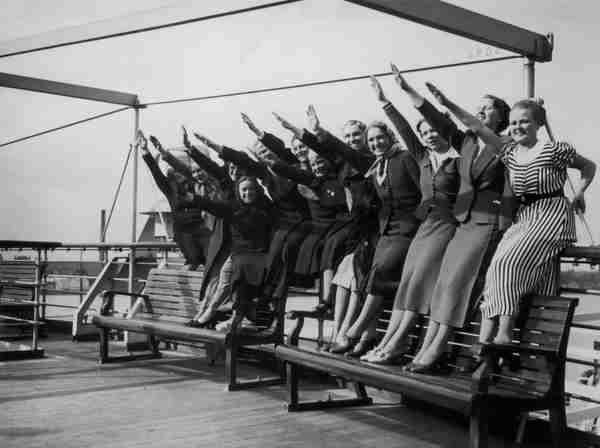 1938: English girls giving Nazi salute returning from a field trip to Germany – ‘We had the time of our lives!’ (Der Spiegel)

As I’ve been writing for years, Generational Dynamics predicts that Iran, India and Russia will be allied with the West against China, Pakistan, and the Sunni Arab nations in the coming Clash of Civilizations world war.

For the last few weeks, there have been increasingly widespread reports in the media that Israel and Saudi Arabia have all but severed ties with the United States, and are forming an independent military alliance against Iran.

This development runs counter to a very powerful Generational Dynamics trend prediction, and so it needs to be analyzed. Either the trend prediction is wrong (which it isn’t), or the Israel-Saudi alliance must be relatively short-lived.

Several days ago, Israel’s prime minister Benjamin Netanyahu publicly announced a significant change in policy, as he asked the Arab nations to help in a “real deal” with the Palestinians:

The initiatives I’m referring to are regional initiatives – meaning, aided by the Arab countries in the region to reach a real deal with the Palestinians. We always thought it would be the opposite, but that is the direction today. I am constantly trying, including over the last few hours, to further contacts with various leaders in the region to help in this direction.

A couple of days previously, Netanyahu responded to an offer by Egypt’s president Abdel Fattah al-Sisi to mediate between Israel and the Palestinians by saying, “Israel is ready to participate with Egypt and other Arab states in advancing both the diplomatic process and stability in the region. I appreciate President al-Sisi’s work and also draw encouragement from his leadership on this important issue.” According to reports, the Arab countries include Saudi Arabia, the Gulf states, Jordan and Egypt.

Netanyahu had previously rejected the help of Arab mediators in the Palestinian issue, because they were insisting on the “right of return,” which would allow the descendants of Palestinians lost their homes in the 1948 war between Jews and Arabs to reclaim their grandparents’ real estate. However, reports suggest that the Arab nations are backing off from that demand.

The Palestinian issue is only the latest of the issues uniting the Saudis, Egyptians and Israelis. As we have reported for years, President Obama has managed to alienate all three countries and offended their leaders. This has led to a shared sense of betrayal and abandonment, especially after Obama’s vigorous pursuit of a nuclear deal with Iran, creating a widespread impression that he was more interested in a good relationship with Iran than with them.

There have been signs that the rapprochement in Israel’s relationship with Egypt and Saudi Arabia have crossed over into the military sphere.

Israel and Egypt signed a 1979 peace treaty that Egypt’s Sinai peninsula was a demilitarized zone. Yet Israel has approved Egypt’s requests to move additional troops into Sinai, near the border with Israel. More recently, Israel raised no objections to Egypt’s transferring two Red Sea islands to Saudi Arabia, even though the transfer affected Israel’s security.

Israel and Saudi Arabia share the common interest and belief that the biggest threat is Iran. Reports have surfaced in the past that the Saudis gave Jerusalem approval for Air Force jets to pass through their airspace if Israel decides to attack Iran’s nuclear facilities. This suggests that Israel and Saudi Arabia have military to military contacts regarding Iran, and may be sharing intelligence or making other plans. Breaking Israel News and Israel National News and Politico (EU) and Jerusalem Post (12-Apr)

According to recent reports, Iran has ordered Hezbollah to suspend operations against Israel and to target Saudi Arabia instead.

Lebanon’s Shia terrorist group Hezbollah and its leader Sayyed Hassan Nasrallah have been Iran’s puppets for decades, and have had as their main objective “resistance” to Israel, or the destruction of Israel. Israel and Hezbollah fought a war in Lebanon in 2006, and Hezbollah has supported Hamas and other Palestinian groups in conducting terror operations against Israel and Israeli targets.

But the war in Syria has changed all that. Under orders from Iran, Hezbollah sent thousands of its fighters into Syria to fight alongside the army of the regime of Syria’s president Bashar al-Assad. The targets have been anyone who opposes al-Assad, all the way from peaceful protesters and children in school all the way to the jihadist groups, so-called Islamic State (IS or ISIS or ISIL or Daesh) and the al-Qaeda linked Jabhat al-Nusra (al-Nusra Front).

Last week, Nasrallah admitted for the first time that he had lost “a large number” of his fighters in battles in Syria. Some reports give a figure of 1,500 to 2,000, or one-third of his entire army.

The new orders from Iran were triggered by a number of devastating Iranian and Hezbollah losses in Syria, including the assassination of Hezbollah’s top military commander Mustafa Amine Badreddine, who was leading Hezbollah forces in Syria. ( “14-May-16 World View — Syria’s Aleppo campaign falters after disastrous Iranian loss at Khan Tuman”)

The death of Badreddine was extremely significant, and statements by Iran and Hezbollah make it clear that they blame his death on jihadist forces funded and supported by Saudi Arabia.

As we reported yesterday, Iran has announced that it would not let its citizens participate in the Hajj in Mecca on September 9-14. This is Islam’s holiest event, and non-participation by Iran is quite significant. ( “27-May-16 World View — Increasingly hostile Iran-Saudi relations affect this year’s Hajj”)

According to reports, Iran has instructed Hezbollah to initiate actions against Saudi Arabia before the beginning of the Hajj in September. Middle East Eye (17-May) and Middle East Eye and Reuters (20-May) and Al Arabiya (20-May)

Shifting Israeli alliances in the Mideast

I am asked frequently it is conceivably even POSSIBLE that Iran will be an American ally in the coming world war, as I’ve been predicting for ten years would happen, given the political situation of the last ten years.

A generational crisis war, like World War II, is very different from an “ordinary” war because it’s considered existential, a threat to the very existence of a country and it’s way of life. None of the wars that America experience since the end of WW II — Korean war, Vietnam war, Iraq wars — was anything like that. Non-crisis wars are based on political decisions. You have Christmas truces in non-crisis wars. Crisis wars are based visceral hatred, a desire to exterminate. There are no Christmas truces.

On the other hand, the relationship between Saudi Arabia and Iran is based on deeply visceral hatred. We see signs of this all the time, such as the Iranian firebombing of the Saudi embassy in Tehran in January, with no apology forthcoming. Iran and Saudi Arabia will be involved in an extremely bloody generational crisis war with absolute certainty, and it appears that the time is approaching rapidly.

So what about Israel? There is little hatred between Israelis and Iranians, but there is enormous hatred between Israelis and Palestinians, particularly among younger generations. The prediction that I first posted in May 2003 is still just as true today as it was then: Jews and Arabs are headed for a new generational crisis war, re-fighting the 1948-49 genocidal war between Jews and Arabs that followed the partitioning of Palestine and the creation of the state of Israel. (From 2003: “Mideast Roadmap – Will it bring peace?”)

OK, so what about Egypt? Israel and Egypt have had a peace treaty for over a quarter century. Will Israel be at war with Egypt?

To address that question, one first has to point out that Egypt is at war with itself. Egypt’s army is fighting ISIS and Bedouins in Sinai, and there have been major riots targeting Coptic Christians in Egypt.

This example is a small illustration of a vastly larger problem in analyzing generational trends in the Mideast — that there are ethnic fault lines that go beyond the easily predicted sectarian fault lines. Especially with the rise of ISIS, al-Nusra and the Kurds, we can already see signs of Sunnis fighting Sunnis in Syria, for example.

What is needed is a deep, thorough analysis of the trends among all the ethnic groups in the Mideast. Remarkably, this would be a lot easier today than it was even ten years ago, because today there’s a huge wealth of social media that can be looked at.

Analyzing that huge volume of social media is far more work than I’m capable of accomplishing. But if some college student is looking for a thesis topic in order to accomplish something really important and develop valuable information on the future of the Mideast, then this is it. Der Spiegel (13-Jun-2013) and World War II: The Molotov-Ribbentrop Pact