Pakistan again in shock after bloody terrorist attack in Quetta 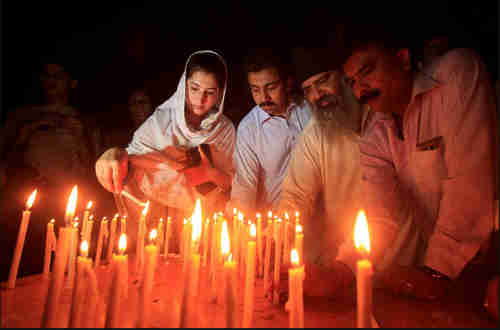 Terror attacks are nothing out of the ordinary in Pakistan, but this attack on Monday is causing even more consternation than others because it exposes the weaknesses in its own security services as well as its inability to control terror groups that in the past it helped create.

On Monday, a terrorist gunman in Quetta shot Bilal Anwar Kasi, the leader of the Balochistan Bar Association, where Quetta is the provincial capital of the province of Balochistan, which is in southwest Pakistan bordering Iran and Afghanistan.

Kasi was taken to Quetta’s Civil Hospital, where a group of lawyers gathered to mourn his death. A suicide bomber then approached the lawyers and exploded, killing at least 75 people, mostly lawyers, and injuring at least 115 others.

Jamaat ul-Ahrar (JuA, Assembly of Freedom) claimed responsibility. JuA has long been one of the terrorist groups under the umbrella group Tehrik-e-Taliban Pakistan (TTP). JuA split off from TTP in the middle of 2014 in a disagreement caused by TTP’s plans to hold peace talks with Pakistan’s government. JuA has rejoined TTP last year, but has also declared allegiance to the so-called Islamic State (IS or ISIS or ISIL or Daesh). For that reason, ISIS is also claiming responsibility for the attack.

On March 15 of last year, JuA claimed responsibility for suicide bombers at two churches, one Catholic and one Protestant, also in Lahore, killing 15 people and injuring 70.

On March 27 of this year, JuA took credit for the Easter massacre of Christians in Lahore in a terror attack. That attack killed more than 69 people, mostly women and children, and injured more than 300. That attack was supposed to kill Christians, but as it turned out, most of the people killed were Muslims. At the time, a JuA spokesman issued a statement: “Members of the Christian community who were celebrating Easter today were our prime target. [However,] we didn’t want to kill women and children. Our targets were male members of the Christian community.”

So JuA was pretty incompetent in that attack, killing a lot of Muslim women and children rather than Christian men. Pretty stupid bunch. So maybe this time they decided to target lawyers so that they’d kill only men, but they’re still just killing Muslims. A regular bunch of Keystone Kops. Dawn (Pakistan) and Express Tribune (Pakistan) and Britannica

[We] believe that Pakistan has taken and is taking steps to counter terrorist violence, and certainly focusing on those groups that threaten Pakistani or Pakistan’s stability. They have – the military has shut down some of these safe havens. They’ve restored government control to parts of Pakistan that were used as terrorist safe havens for years. And these are important steps that have continued – or contributed, rather, to security interests in the region. And they’ve come at a cost of Pakistani lives lost. But at the same time, we’ve been very clear with the highest levels of the Government of Pakistan that they must target all militant groups, and that includes those that target Pakistan’s neighbors, and they must also close all safe havens.

It’s ironic that Toner made these remarks just a few days before Monday’s horrific attack. On Saturday, an angry editorial in Pakistan’s Daily Times directed outrage at Toner:

May I ask whether the State Department has given any proof to Islamabad pinpointing the safe havens? Google Earth is now in everybody’s hands; no part on earth remains a secret to anyone in the world or beyond this globe. Shouldn’t Mark Toner present the satellite images of any of the safe havens within Pakistan or those spared by the forces engaged in Zarb-e-Azb operation? Such statements are tantamount to casting aspersions on Pakistani people, government and armed forces’ all-out sincere efforts to kill this terror monster once and for all. Time and again, Americans have been told that we no more differentiate between good and bad Taliban.

The Saturday editorial agrees that Pakistan in the past used to differentiate between good and bad Taliban, but claims that it no longer happens.

For many years, Pakistan resisted international calls to do something about the terrorist havens, particularly in Pakistan’s Federally Administered Tribal Areas (FATA) along the border with Afghanistan. In June 2014, the Taliban pulled off a spectacular attack on Karachi airport. The editorial above refers to Zarb-e-Azb, which is the name of an operation that Pakistan’s army finally launched in the tribal area, to “clean out” the Taliban’s hideouts and weapons stores.

On Monday, the BBC interviewed Husain Haqqani, Pakistan’s former ambassador to the United States. He was asked to comment on Monday’s attack in Quetta. Here’s my transcription:

The extremist jihadis obviously do not appreciate or agree with modernity, and lawyers do represent rule of law, they represent a more secular orientation than the jihadis would want. Pakistan’s dilemma is that it ends up supporting certain jihadis for operations against Afghanistan and India, while at the same time helping others. The ones it supports end up helping the ones it opposes.

There are 42 jihadi extremist groups in Pakistan that have been identified as perpetrators of terrorism in Pakistan. Several have been banned, but have resurfaced, because of Pakistan’s policy of making a distinction between groups that it can use against its neighbors and groups that it wants to suppress.

Baluchistan is a particularly difficult province – it has an insurgency going on by Baluch secular nationalists, and the army tends to use the Islamists to try and fight the separatists or nationalists, whom it considers to be a greater threat to Pakistan.

There was some success [with the Zarb-e-Azb army operation], but the success will always be limited by Pakistan’s own 25 year policy of making distinctions between groups. So while some groups have been suppressed, others have not. …

[Pakistan’s policy] has indeed created a monster, and Pakistan’s people have suffered because of that, but Pakistan’s military intelligence service, Pakistan’s military and some elements of what can be called the Pakistan establishment are just too wedded to this policy to want to change it, even though the cost is as high as we saw today.

It’s quite clear that Washington’s support [for Pakistan] – $23 billion since 9/11 – has not worked sufficiently to make Pakistan change its policy entirely, and so we do not know what [additional] pressure Washington might be able to bear. I think what we have to live with is that Pakistan will continue to be in this dichotomous position, until and unless Pakistan’s leaders realize that the price their people are paying is just too high.

The number of people killed has now risen to 58, despite a curfew that is now 31 days old, and there is no end in sight.

Many people believe that Pakistan is stoking the violence and even providing money and weapons to terror groups in Kashmir. This belief is supported by the fact that terrorist HM leader Syed Salahuddin is speaking out, calling Wani a “martyr,” and and adding that “Pakistan is duty bound, morally bound, politically bound and constitutionally bound to provide concrete, substantial support to the ongoing freedom struggle on the territory of Kashmir.”

It certainly is possible that Pakistan is directly or indirectly supporting the Kashmir separatists, but it is also true that many people in Pakistan’s Punjab province have friendships with people in Kashmir, or they’re in the same family. They are going to identify with the people of Kashmir and support them, either indirectly or directly, at least with moral support.

In both of those cases, there were extremely bloody wars, and they were completely organic, in the sense that they were not directed by armies or generals, but rose up from the people. This organic war, where protests and demonstrations become violent and spiral out of control are the hallmark of a generational crisis war, the worst and bloodiest kinds of war. The situation in Kashmir is looking more and more like this kind of organic war.

Since the 1947 Partition war, there have been three non-crisis wars fought between India and Pakistan over Kashmir. The terrorist Syed Salahuddin, quoted above, said on Monday, “I can predict a 4th war with certainty because Kashmiris are no longer willing to compromise, come what may.” Salahuddin also predicted that this could spiral into a much larger war, and even become a nuclear war. If the Kashmir demonstrations become more violent, and begin to look more and more like what happened in 1857 and 1947, then Salahuddin may turn out to have been right. New Indian Express and Express Tribune (Pakistan) and First Post