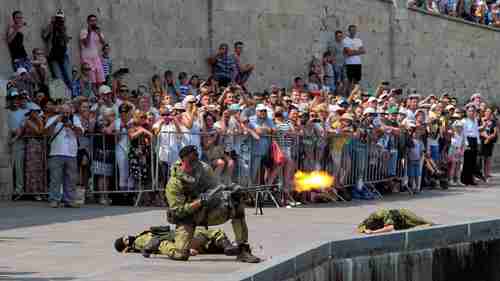 Ukraine is deploying troops and military equipment to the border with the Crimea, the peninsula that Russia annexed after invading Ukraine in 2014, after residents reported a new Russian military buildup in northern Crimea, including troops, tanks, and other military hardware. In addition, Russia closed crossing points along the northern border on Sunday morning, although some of them have been reopened. Gunfire has also been reported.

Tensions are high because it is not known whether the deployment is a military exercise, or whether it is the prelude to a new invasion of Ukraine by Russia’s military.

It is worthwhile today to briefly review what happened in 2014. Russia’s president Vladimir Putin said that there were no Russian troops in Crimea, as Russian troops were invading Crimea. Later, Putin said would Russia would not annex Crimea, and a few days later, Russia annexed Crimea. On TV, Putin bragged about repeatedly lying and completely fooling the West. Putin said there were no Russian troops in East Ukraine as Russian troops were invading East Ukraine. Russian separatists in East Ukraine used a Russian-built Buk surface-to-air missile system to shoot down a passenger plane, Malaysian Airlines flight 17, killing hundreds of innocent civilians. The Russians lied, and said that the plane had fallen out of the sky by itself, or had been struck by a meteor. ( “14-Oct-15 World View — Dutch report confirms that Russian missile shot down airliner over Ukraine”)

So now Russian troops and military equipment are massing on the northern border of Crimea, and no one doubts that a new invasion of Ukraine could happen at any time. One thing that we can be sure of is that whatever Putin and the Russians say will have no relationship to the truth, except by accident. RFE/RL and Daily Mail (London) and Ukraine Today

Furious Chinese state media are accusing the South Korean government of “seditious” moves by attacking the motives of South Koreans who opposed deployment of the Terminal High Altitude Area Defense (THAAD) anti-missile system. According to Xinhua, South Koreans opposing the THAAD deployment “are being reviled as blind followers of North Korea, or sycophant betrayers.

The THAAD deployment was triggered by aggressive military development in North Korea. This year, the North has made its fourth nuclear missile test, and has conducted numerous long-range missile tests. The obvious conclusion is that North Korea is developing technology to launch a nuclear strike against South Korea, Japan, and the United States. South Korea has rebuffed US requests to deploy THAAD for years, but recently acquiesced because of the North’s nuclear weapon and long-range missile tests. ( “4-Aug-16 World View — North Korean missile strikes sea close to Japan, threatening radar base”)

China has been fuming at South Korea since the announcement, but the threats in China’s media go well beyond demonizing South Korea’s government. Beijing’s Global Times advocates counter-measures:

There is little doubt that many South Koreans are becoming panicky over North Korean nuclear missile systems. So might reasonably wonder why China is so freaked out over an anti-missile system to provide protection from those weapons.

The X-band radar can snoop on Chinese and Russian territories as it can spot at least 2,000 km. Seoul claims that it will adopt the radar with a detectable range of 600-800 km, but the mode change can be made at any time in accordance with the needs of the U.S military that will operate the THAAD battery in South Korea.

In other words, the Chinese are freaking out because THAAD protects South Korea, Japan and the US not just from North Korean missiles, but also from Chinese missiles.

China has been preparing to launch a pre-emptive attack on the United States back at least as far as the 1990s. During the last 20 years, China has been spending trillions of dollars on one nuclear missile system after another with no purpose except to destroy American cities, aircraft carriers, and military bases.

The THAAD anti-missile system, if successful, could force China to postpone their invasion plans for years, and may also require them to spend trillions more to reconfigure their missile systems to defend against THAAD. No wonder their infuriated.

The recent ruling by the United Nations Permanent Court of Arbitration in the Hague has been a devastating political blow to the Chinese. The ruling completely eviscerated China’s claims in the South China Sea, and made it clear that China’s artificial islands are illegal, and one of them is actually in waters governed by the Philippines. Not only that, but some of China’s evidence to support it claims turns out to be delusional or a complete hoax. ( “13-Jul-16 World View — Philippines humiliates China in harsh Hague Tribunal ruling over South China Sea”)

China’s reaction to all this is to become even more militarily belligerent, not only in the South China Sea but also in the East China Sea in belligerent confrontations with Japan.

As I’ve written in the past, China is behaving in a highly emotional, irrational, panicky, nationalistic manner, issuing delusional and fabricated evidence to support claims that everybody knows are false claims. This is what makes China so dangerous, and may cause them to make some really stupid decisions that will result in a world war, killing billions of people, and painting themselves as worse than Hitler’s Nazis for decades. Xinhua and Global Times (Beijing) and Council on Foreign Relations