An estimated one million in South Korea took to the streets over the weekend demanding their president, Park Geun-hye, step down over allegedly sharing classified information with a friend. The scandal, erupting in late October, has damaged Park’s economic proposals and threatens to herald in an opposition government that may undo her work in office.

The Korean newspaper Chosun Ilbo reported on Monday that protesters estimated “up to 1 million” had shown up to protests in Seoul and elsewhere in the nation demanding Park’s resignation. Korean police placed that number at the far lower 260,000, which Chosun dismissed as one of many “notorious low” police estimates on protest sizes. The images from the protests are striking, regardless of which number is closer to reality. 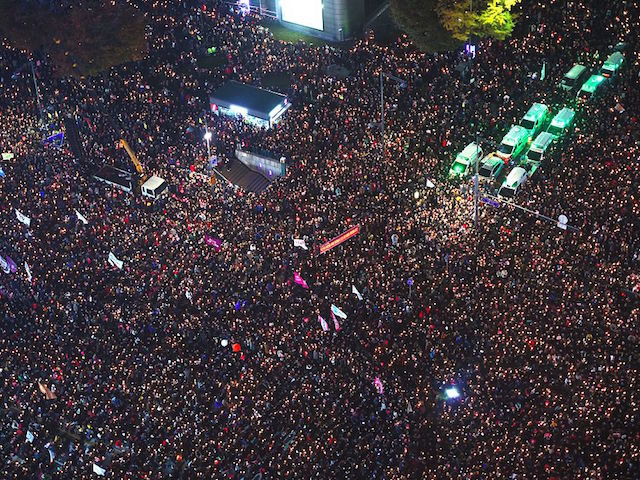 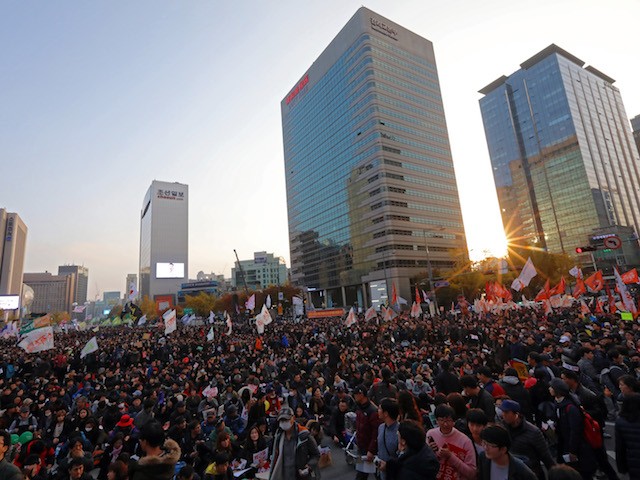 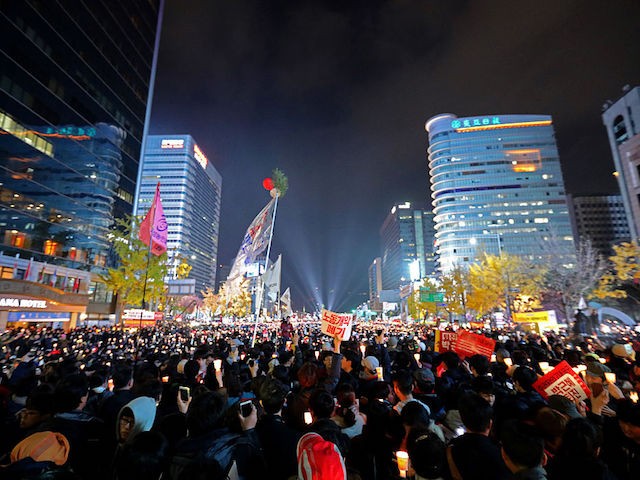 The scandal erupted in October, when an investigation revealed that Park had shared confidential information, including the texts of pivotal national security speeches, with Choi Soon-sil, a longtime friend with no security clearance and no government experience. Choi’s father, a cult leader, met a young Park following the assassination of her mother, and reports suggested that the elder Choi became a mentor and confidante to Park by promising he could communicate with the dead.

Park has issued two nationally televised speeches apologizing for her relationship with Choi, explaining that she only allowed Choi to edit some speeches but did not make her privy to any other sensitive information. Park has also dismissed some of the more bizarre rumors surrounding their friendship, including the claim that she allowed Choi’s cult to conduct exorcisms in the presidential palace.

Park has also promised to submit herself to a legal proceeding to ensure the truth about her relationship to Choi be public. The legislature is expected to assemble an independent counsel, allowing the opposition parties benefitting from the scandal to have a say in who will judge her.

Park has hired an attorney, who is demanding the independent committee provide more time for the presidency to prepare a defense, arguing that “considerable time” is required to compile the proper evidence. Choi remains detained following her return to the nation from Germany and has been cooperative with law enforcement.

Opposition parties appear hopeful that they can oust Park and have begun to oppose unrelated party policy claiming the scandal demands it. “Now, the situation has reached a point of no return. I, along with citizens, will set out to conduct a nationwide campaign for Park’s resignation until she declares she will unconditionally step aside,” Moon Jae-in, whom the Korean news agency Yonhap describes as a “presidential hopeful,” said on Tuesday.

Other politicians, smelling blood in the water, appear to have begun sabotaging Park’s policies. Yonhap also noted Tuesday that the National Assembly is seeking to move against funding “creative economy” centers, a trademark Park developed during her tenure, which are intended to foster innovation:

The main goal of the centers is to match up local startups and venture firms with conglomerates, which can provide resources to smaller companies so that they can turn creative ideas into real business opportunities. The centers have also provided various kinds of support for aspiring entrepreneurs both at home and abroad.

It remains uncertain whether the Assembly will move against Park in realms other than her economic programs, such as social development or national security.