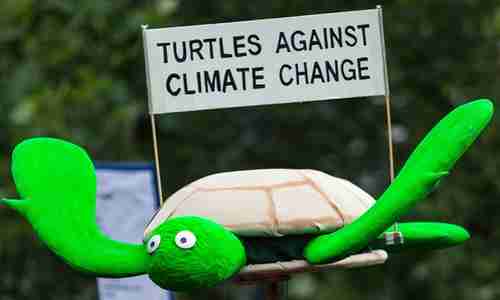 Banner from an Australian march against climate change

The surprise election victory of Donald Trump, who has called climate change “a hoax,” has been an extremely unpleasant shock to African leaders attending a climate change conference in Marrakesh, Morocco. Prior to the election, they had hoped that the international climate change agreement would be a financial bonanza, and they are angry now that they see all that money slipping away, and are concerned that the entire climate change effort may be near collapse.

A statement by United Nations Secretary-General Ban Ki-moon to the Marrakech conference on Wednesday urged a rapid scale-up in funding for climate change programs, especially to support developing countries. “Finance and investment hold the key to achieving low-emissions and resilient societies,” he said.

Many leaders are urging that implementation of the climate change agreement be sped up so that as much as possible can be done while president Barack Obama is still in office.

World Bank president, Jim Yong Kim, said that he’s trying to mobilize as much as financing as possible.”

It is not just about trying to persuade donors and financiers to put up more money, although we are definitely trying to do that, but it also about creating the environment that crowds in a lot more financing. Even if we have the 100 billion dollars we are talking about, it is not nearly enough to reach our goals…

We are trying to find ways to improve the way the existing banking sector understands and considers the risks of climate smart investments.

Kenya’s president Uhuru Kenyatta said that the developed countries have an obligation to provide plenty of money to developing countries like Kenya:

We should aim to ensure achievement of the long-term global goal of stabilizing the global temperature increase to below 1.5 degrees Celsius above the preindustrial levels, which gives hope to the most vulnerable countries and communities…

The process should also take into consideration the obligations of developed country Parties to provide additional, predictable and sustainable support in terms of finance, technology and capacity building to meet the adaptation and mitigation needs of the developing country Parties.

One thing that we have learned over the years is that giving free money to African countries is mostly a disaster. After decades of giving huge amounts of aid to African countries, the people are just as poor and the infrastructure is little changes. Money given to an African leader is used to buy weapons, or to build a new glittering presidential palace, or to be deposited in a foreign bank account. United Nations and Capital FM (Nairobi) and The Hindu

The ‘science’ of climate change

As I’ve written in the past:

I’m not aware of any evidence to support the belief that any money spent on the basis of an international climate change agreement would not be completely wasted. BBC