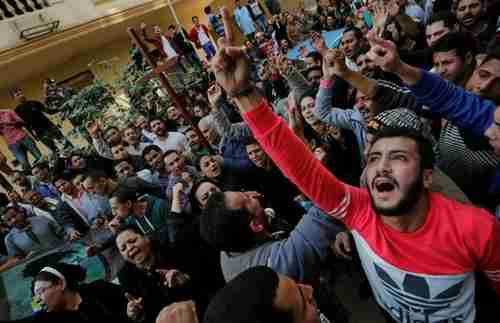 Egyptian Christians are blaming the government for Sunday’s suicide bombing that killed 24 people and injured 49 in a chapel adjacent to St. Mark’s Cathedral, Cairo’s largest church and home of Coptic Pope Tawadros II. Some are demanding the fall of the regime.

According to witnesses, the police did not perform the usual checks and searches of people entering the Church. According to one witness, “There were police cars stationed in front of the church gates… They were too busy eating breakfast and drinking tea and soda. They weren’t doing their job.”

Egypt’s president Abdel al-Fattah al-Sisi blamed the Muslim Brotherhood. However, the Muslim Brotherhood has denied this, and no one has claimed responsibility, but the only people celebrating on social media were supporters of the so-called Islamic State (IS or ISIS or ISIL or Daesh), who wrote, “God bless the person who did this blessed act.” Al Arabiya and Reuters and AFP

We’ve been reporting Italy’s banking crisis for a while now, and there has always been uncertainty about which of several paths it would take. After the events of the last week, a lot of that uncertainty has vanished, but the result isn’t what would be hoped.

Italy held a referendum last Sunday on a change to the constitution that would make Italy’s government more stable. Prime minister Matteo Renzi had promised to resign if the referendum was defeated. Italy’s Banco Monte dei Paschi di Siena (MPS), founded in 1472, and the world’s oldest operating bank, was hoping that the referendum would pass, since they believed that would make it more likely that investors would lend the bank 5 billion euros to make a debt repayment and avoid a bank crisis for a few more months.

Well, the referendum was voted down. Renzi resigned, as promised. Italy has a new prime minister, the outgoing foreign minister, Paolo Gentiloni, who took office on Monday. But whether investors would lend MPS 5 billion euros is still in doubt, and considered less likely. Hope is not dead, as there is still a chance that Qatar’s sovereign wealth fund, the Qatar Investment Authority, will lend MPS one billion euros, and that will encourage other investors to provide the other four.

Failing that, Italy’s government will have to bail out MPS. Under European Central Bank (ECB) rules that were imposed because of Greece’s banking crisis, a government bailout of MPS would require a “bail-in” of MPS’s bond holders.

For almost all banks, the bond holders are sophisticated investors who purchased bonds issued by the bank as an investment. But MPS is unique, in that thousands of ordinary people, including many elderly savers, who wanted to deposit their money in savings accounts instead were sold bank bonds by the bank’s staff. The result is that a “bail-in” of supposedly sophisticated investors will actually cause tens of thousands of people to lose their life savings.

MPS asked the ECB for a few more weeks’ time to get the loans, but the request was rejected by the ECB. As a result, either MPS must get its loans this week, or else the new prime minister Paolo Gentiloni will have to authorize a government bailout by next weekend. Guardian (London) and AP