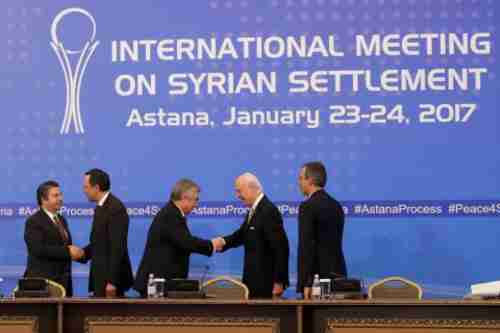 What’s wrong with this picture? There is a civil war in Syria between the Shia/Alawites versus the Sunnis. On Tuesday, Russia, Iran and Turkey signed a peace agreement.

Nobody from Syria signed the agreement. It was an agreement among outsiders, and did not include any parties who are nominally the opponents in Syria’s civil war.

Another reason it is different is that the United States was not invited to the peace talks, largely because Iran opposed having the US present. However, the US was permitted to have an observer, and sent George Krol, the U.S. ambassador to Kazakhstan. The US issued a statement saying that it welcomed any “actions that sustainably de-escalate violence and reduce suffering in Syria.”

However, the main reason, according to analysts, that this time it’s different is that Russia is making it clear that it is willing to enforce a peace in Syria, so that it will get the credit for bringing about peace.

In fact, Russia is so eager to enforce a peace that on Tuesday, for apparently the first time ever, Russia publicly bashed Syria’s president Bashar al-Assad for breaching the ceasefire and lying about it.

This has to do with a region called Wadi Barada in the suburbs of Damascus that is under the control of anti-Assad rebels. Al-Assad’s forced, aided by Iranian-backed Lebanese Hezbollah forces, have been breaching the ceasefire, attacking the anti-Assad rebels around Wadi Barada. Al-Assad claimed that it was al-Qaeda forces that were attacking the rebels, but the Russians called him out, essentially calling him a liar.

Readers may recall that in 2015, al-Assad’s army was close to complete collapse, and was only saved by massive Russian intervention. This was confirmed on Tuesday by Russia’s foreign minister, Sergei Lavrov, who said that al-Assad and Damascus itself were only three weeks away from falling, which was prevented only because the Russian air force came and saved him.

So the Russians have hallucinatory belief that they are going to enforce a ceasefire across Syria, including al-Assad’s army, the so-called Islamic State (IS or ISIS or ISIL or Daesh), the al-Qaeda-linked Jabhat al-Nusra (al-Nusra Front, recently renamed Jabhat Fateh al-Sham or JFS), and any of the numerous anti-Assad rebel groups in Syria. Russia is going to enforce a ceasefire among all those groups, Syria will return to “normal,” and Russia will get all the credit for bringing peace to the land. It’s hard not to laugh. Washington Post and Guardian (London)

It is almost hard to believe, but we’re seeing “proximity talks” again.

In Astana, the al-Assad representatives were supposed to meet face to face with the anti-Assad rebel representatives. On Monday, they all sat around a nice oval table, so they could negotiate. So then the lead rebel negotiator Mohammed Alloush called the Syrian government a “bloody, oppressive regime” that forced Syrians to choose between “the terrorism of Bashar and the terrorism of ISIS,” implying that al-Assad is a worse terrorist than ISIS. Syria’s lead negotiator, Bashar Jaafari, responded by calling Alloush the head of the “armed terrorist groups’ delegation.” So that was the end of the face-to-face talks between the al-Assad and rebel representatives. After that, they were put into separate rooms, and the farcical “proximity talks” started.

I described how this works in the context of the January 2014 peace negotiations. Instead of talking to each other, a mediator carries messages back and forth between the two sides, in the hopes of reaching an agreement that way.

The aftermath of the destruction of Aleppo

Let’s review. Last year, al-Assad’s military, supported by overwhelming destructive force provided by Russia and Iran, was going to destroy the city of Aleppo. That was going to end the war because it would demoralize the opposition groups and jihadists so they would lose interesting in fighting, and would go home.

At the time, Bashar al-Assad called it “history in the making”:

Well, nobody is talking about the destruction of Aleppo as “history in the making” anymore. It was pure fantasy by al-Assad. Al-Assad destroyed Aleppo, but nobody seems to have gone home. There is a ceasefire in effect, but how long before it falls apart?

I’ve been writing about this war for years. Syria is in a generational Awakening era, and this war should have fizzled within a year. But Bashar al-Assad’s goal is extermination of Syria’s Sunnis, as I’ve been describing for years.

It is worth remembering how we got here. The civil war in Syria was caused by al-Assad when he unleashed his army and air force against peaceful protesters in 2011. Up to that point, Turkey and Saudi Arabia were friendly with al-Assad. Things really turned around in August 2011, when al-Assad launched a massive military assault on a large, peaceful Palestinian refugee camp in Latakia, filled with tens of thousands of women and children Palestinians.

Al-Assad’s unprovoked attack on this refugee camp, and the slaughter of thousands of Palestinian women and children, drew young jihadists from around the world to Syria to fight al-Assad, resulting in the formation of the so-called Islamic State (IS or ISIS or ISIL or Daesh). Sunnis in Syria itself turned against al-Assad, forming either “moderate” rebel militias or joining the jihadist Al-Nusra Front. Al-Assad is responsible for displacing millions of Syrians, including over a million that have flowed into Europe as refugees.

So let’s suppose that the Astana peace negotiations “succeed” in some sense, and the ceasefire continues for a while. What’s going to happen when Syrians begin peacefully protesting again? Is al-Assad going to ignore it this time? How long will Russia’s military be willing to continue spending blood and money to enforce the ceasefire?

A ceasefire cannot work unless both sides want it to work. In this case, neither side wants it to work. What has always been clear to me is that al-Assad started this war and is the driving force behind continuing the war. As long as al-Assad is in power, the war will continue. ARA News (Syria) and LA Times