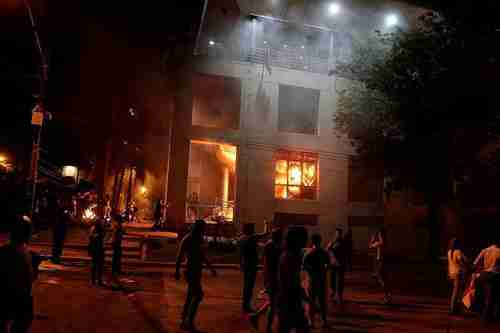 One person was killed and dozens injured on Friday night in Paraguay’s capital city Asunción during the most massive and most violent anti-government protests since democracy was restored in 1992. The protesters chanted “Dictatorship never again!” in opposition to a proposed constitutional amendment that would permit President Horacio Manuel Cartes to run for a second five-year term in 2018.

Protesters also set fire to the National Congress building, which burned for over two hours, as the rioting carried on long into the night. Two hundred people were arrested.

The protesters were reacting to the memory of the vicious, bloody 35-year dictatorship of General Alfredo Stroessner Matiauda, who had governed Paraguay from 1954 to 1989. He was thrown out of office in a coup, after which a constitution guaranteeing democracy was implemented. The constitution stated that the president would have one five-year term, and could not be reelected.

On Friday, by a secret vote, Paraguay’s Senate (upper house) approved a constitutional amendment allowing the re-election of a president to a second term, triggering the violent riots on Friday evening.

For the constitutional amendment to pass, it must also be approved by the Chamber of Deputies (lower house), where 44 of the 80 members belong to Cartes’s right-wing governing Colorado party. When the vote is taken, the amendment is expected to be approved easily. It’s thought that the rioters set the National Congress building on fire to prevent the vote from being taken.

On Saturday evening, President Horacio Cartes fired Paraguay’s interior minister and top police officials in the hope of avoiding more rioting. The vote in the lower house has been postponed. Reuters and Straits Times (Singapore) and Washington Post

The Spaniards arrived in 1537, and Paraguay became part of the Spanish empire during the conquests of the mid-1500s. Spain’s South American empire continued relatively peacefully until the early 1800s, when a major event occurred.

The French Revolution had occurred in the 1790s, and by the early 1800s, Emperor Napoleon of France was proceeding with a series of conquests with the intention of forming an early “European Union,” with Napoleon at its head. One of the conquests of his French army was the invasion of the Iberian Peninsula in 1807-08, usurping the Spanish crown. This created a domino effect in Latin America, where one country after another declared independence from Spain, and the Spanish empire essentially disintegrated by 1825. Paraguay achieved independence in 1811.

Paraguay’s next generational crisis war was the War of the Triple Alliance, 1865-70, which Paraguay fought against Brazil, Argentina and Uruguay. This war was devastating. In the five years of war, as many as 300,000 people, over half of the population, were killed.

Both of these generational crisis wars, the war for independence and the War of the Triple Alliance, are still well-remembered in Paraguay today, and stand as a symbol of the country’s unity against foreign invaders.

Alfredo Stroessner was of German ancestry, with a father from Bavaria and a mother from a wealthy Paraguayan family. As a soldier, he fought bravely in the Chaco War, and he was promoted several times during the next decade. In the generational Recovery era that followed, the Chaco War, he proved to be an able politician in the power struggles that occurred, including a brief civil war in 1947.

In 1954, General Stroessner became a dictator through a coup. This was the beginning of the country’s generational Awakening era. I’ve described many times how a country’s leader during this period can become extremely violent or even genocidal, as we’re seeing today during the Awakening eras of Syria and South Sudan. These leaders use as an excuse that they have to use violence to prevent a new crisis war from breaking out, although that’s impossible anyway during an Awakening era. Stroessner’s 35-year rule was particularly vicious and bloody, as we described above.

Stroessner was overthrown in a coup in 1989, and in 1992 a constitution was installed that promised a democracy – including the provision that no one could be president for more than one five-year term. The current president, Horacio Cartes, is trying to amend the constitution to run again, as described above, and this has triggered the most rioting and violence since 1992.

Many people are concerned that this might trigger a civil war between different groups within Paraguay, but this seems unlikely, since the last three generational crisis wars were all fought with an external enemy.

In recent decades, there have been additional populations of Japanese, Korean, Lebanese and ethnic Chinese immigrants that have formed small communities. Another distinct subgroup are the “brasiguayos,” second-generation Brazilians that were born and raised in Paraguay.

Although there are distinct class differences among the groups listed above, there is no history of a war along a fault line separating them.

Since Paraguay is in a generational Crisis era, it may be close to another war, but I would not expect it to be a civil war, and I would not expect the current rioting to spiral into a larger war, unless another country got involved. Paraguay’s crisis wars have all been fought against external enemies, and I would expect its next crisis war to be the same. Country Studies – Paraguay and History World – Paraguay and Every Culture – Paraguay

Paraguay’s National Congress building was built with funding from Taiwan

An interesting sidebar to this story was that Paraguay’s National Congress building was built using a $20 million donation from Taiwan. This is the building where protesters ransacked and set fire on Friday night.