The Christian holiday occasion of Holy Week has brought a new wave of protests to Venezuela’s major cities – and with them another wave of violent police repression.

Opposition leaders have documented six deaths so far attributed to police violence, including a child, an elderly woman suffocated by tear gas, and four peaceful protesters.

The latest Venezuelan to die marching for his country’s liberation from socialist dictator Nicolás Maduro was identified this week as 32-year-old Gruseny Antonio Canelón.

Canelón died on Wednesday after participating in a protest in Lara state on Tuesday. Police shot him with rubber bullets, piercing vital organs, including his lungs and liver, and causing his death. Two others – 36-year-old Miguel Antonio Colmenares and an unnamed 13-year-old – died on Tuesday after police attacked them during the same protest. 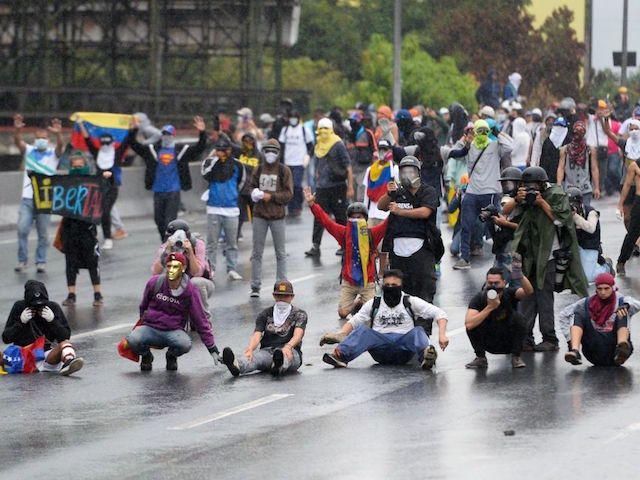 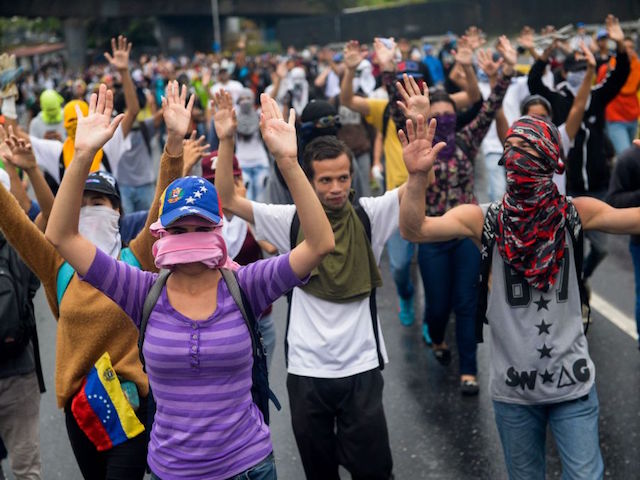 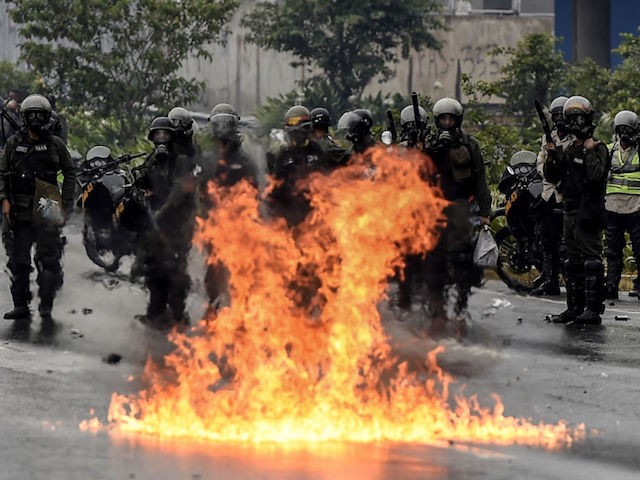 Three other individuals have died in the past two weeks, killed by police attacks on unarmed protesters. 19-year-old Jairo Ortíz was shot to death; 20-year-old Daniel Queliz died after being shot in the neck. 87-year-old Ricarda González died asphyxiated by tear gas as her home filled with the toxic fumes and she was unable to leave the house in time to save herself.

“Daniel was going to be a successful lawyer,” his father Alexander said during a press conference following his death on Wednesday, warning the government that he was an “open book” and any attempts to disparage him posthumously would backfire.

The violence has not stopped the protests. Reuters notes that “each of the volatile country’s 335 municipalities” experienced some form of peaceful march against the government on the Christian holiday known as Holy Thursday, with formerly solid socialist strongholds also participating in the protests.

One protester, a carpenter by trade, told Reuters that he felt it impossible to avoid spending the holidays protesting. “Maduro must know we cannot keep going like this,” Rafael Garcia said. “I don’t want to be here protesting during Easter holidays, but it’s worth the effort because what we live through in the next few years depends on this.” 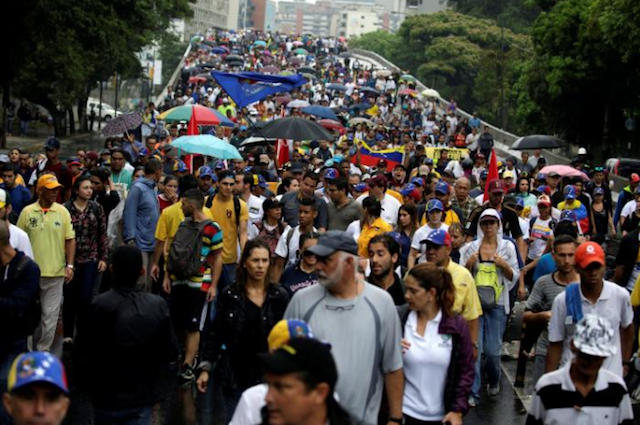 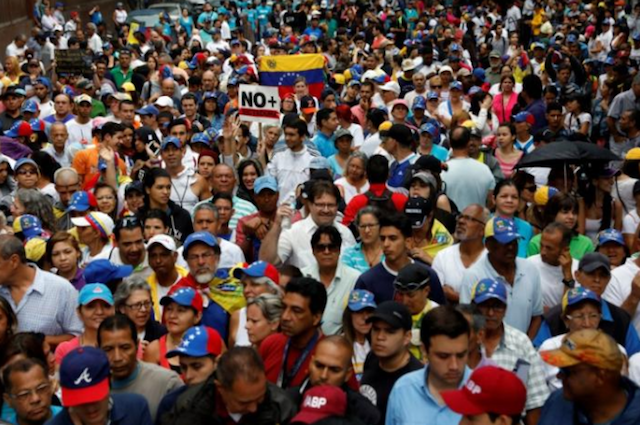 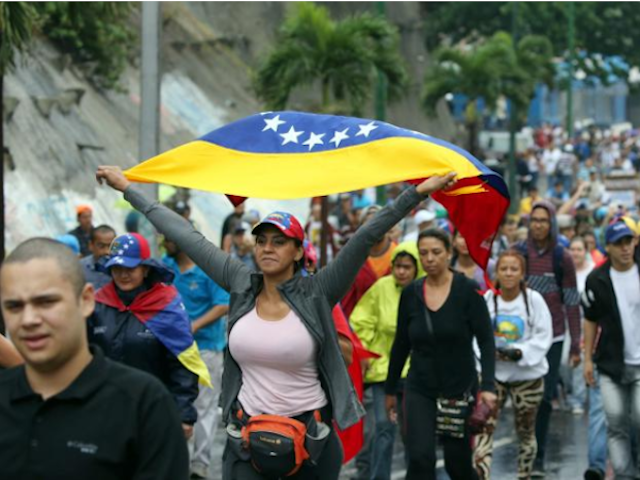 “It’s time to stop being poor and hungry. I’m going to stay in the streets until we get rid of this government,” another protester, Rolisber Aguirre, told the Associated Press.

As the protests have grown, so has the state-sponsored violence. In Vargas state, opposition public officials were corralled together to prevent them from marching on Wednesday. In Los Teques, the capital of Miranda state, Bolivarian National Guard (GNB) soldiers began storming homes of known protesters at 2:30 AM Friday. Eyewitnesses say the soldiers also shot into the windows of nearby buildings and did not stop the pro-Maduro gangs known as colectivos from assaulting protesters earlier in the day.

Miranda’s governor, Henrique Capriles Radonski, ran against Maduro for president and lost in a highly suspect election in 2013, where Capriles and his supporters insist fraud occurred. To prevent Capriles from continuing to organize protests, the government banned him from public office for 15 years this week. 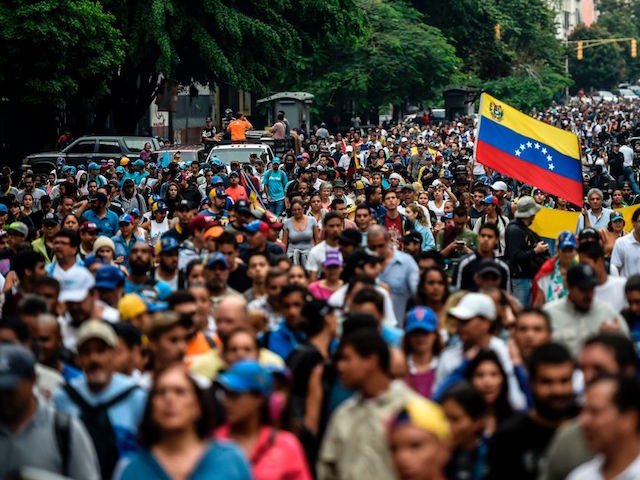 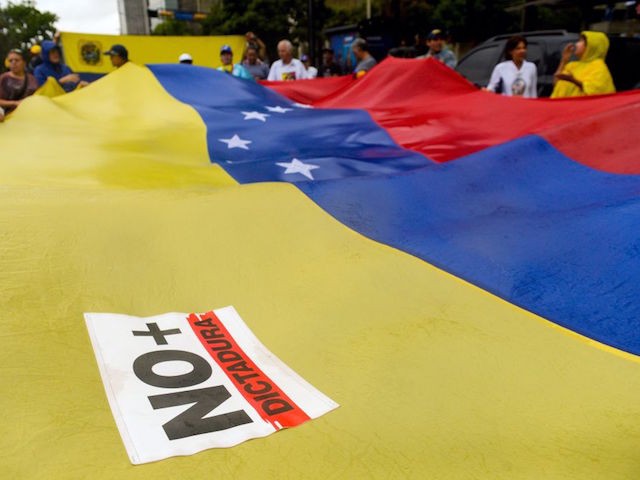 Speaking to the Miami Herald, Capriles suggested that the latest wave of oppression – in addition to stripping him of his political power, the government attempted to nullify the National Assembly earlier this month – has inspired a new movement away from Chavismo. “We almost have to be thankful to Maduro” for the repression, he joked, as “they have helped push aside any differences that have existed” among the opposition due to the urgency of removing him from power.

Outside of Miranda, former Maduro strongholds are now turning against him. On Tuesday, a mob pelted Maduro with rocks and eggs in San Félix, a city with a traditionally reliable socialist base. Government television cut the video because protesters almost stormed his motorcade, and are now arguing that the projectiles hurled at Maduro were meant as a supportive gesture.

“I did not see violence, it was an act of love,” Maduro cabinet member Aristóbulo Istúriz argued on television this week. “They were giving him everything… a baseball, a mango, a tomato, people are looking for any chance to reach the president.”