During a discussion that George Washington University (GWU) hosted about the threats facing the United States, retired Gen. Kelly noted in his prepared remarks:

It’s the highest number of drug-related deaths our country has ever seen. It’s more deaths than the peak of the AIDS epidemic in 1995. In a single year, we’ve lost nearly as many Americans to drug overdose as we lost in battle in World War I. Almost as many as was lost in 12 years in Vietnam.

And that’s just overdose deaths. That number—as high as it is—says nothing about the long-term health damage to our citizens who survive, to say nothing about the human misery, the families ripped apart, and the extremes of crime and violence inherent in the illegal-drug enterprise.

Kelly identified transnational criminal organizations (TCOs) in the form of Latin American drug cartels and violent international gangs like MS-13 as “one of the greatest” threats against the American public.

The damage TCOs do is not only violence and potential terror. It is also vast tonnages of marijuana and hard drugs—cocaine, heroin, counterfeit opiates, fentanyl, and meth amphetamines—they smuggle across our borders to feed both the recreational and addictive U.S. drug demand.

He cited the fatal overdoses as one of the significant consequences of the large amounts of drugs TCOs smuggle into the U.S. daily.

According to the CDC, the abuse of opiates, which includes heroin and other drugs derived from opium, such as painkillers, is the primary driver behind the overdose death epidemic currently afflicting the United States.

Echoing the Drug Enforcement Agency (DEA), Kelly said that most of the heroin in the United States originates in Mexico.

Although the majority of heroin in neighboring Canada comes from Afghanistan, the world’s top producer of opium and its heroin derivative, the most recent DEA estimate suggests that only one percent of the Afghan-based drug makes it into the United States.

The DEA projections for heroin availability in the United States are based on law enforcement seizures.

In its most recent U.S. National Drug Threat Assessment, the agency acknowledges that its estimate only provides “a snapshot of the U.S. heroin market,” adding that “since not all heroin seizures in the United States are submitted for analysis, the source area proportions should not be characterized as market share.”

A CDC map shows that states at or near the U.S-Canada border are home to the largest concentration of the recent increases in heroin overdose deaths. 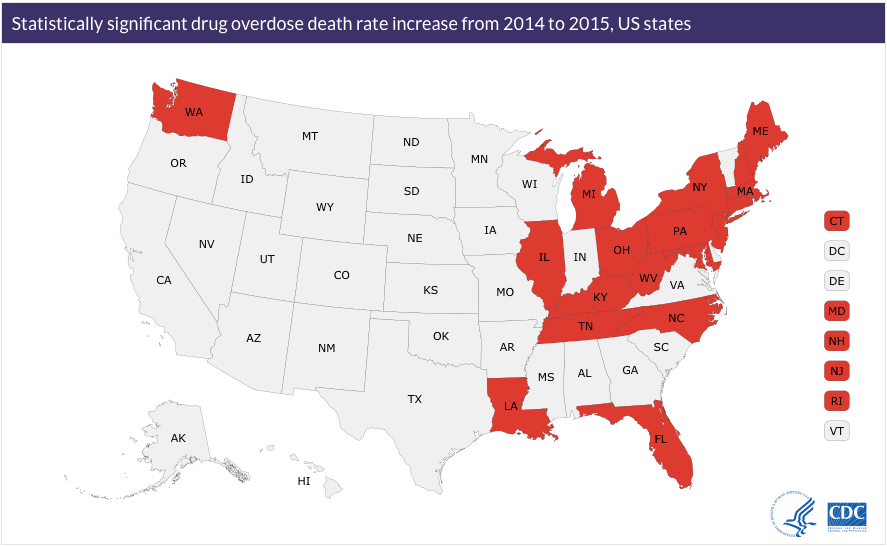 None of the states along the U.S.-Mexico border experienced a “statistically significant” increase in fatal overdoses from 2014 to 2015, the latest period for which data is available.

Not everyone agrees with the DEA’s assertion that most of the heroin in the U.S. is cultivated in Mexico. Last year, an article published by the Alliance for Human Research Protection (AHRP), a patient advocacy group, criticized the former U.S. administration and the mainstream media for misleading the American public about the influx of heroin from Afghanistan.

In the report, William Edstrom, a scientist and author of articles in scientific journals, including the Journal of Biological Chemistry, noted:

Heroin from Mexico cannot supply even 10% of US heroin demand. Yet the DEA claims most heroin in the US is from Mexico.

Most heroin in the US is coming from US-occupied Afghanistan. We’re getting hit with the largest ever illicit drug epidemic in American history and the DEA is asleep at the wheel.

In 2012, the Associated Press (AP) reported that some American soldiers in Afghanistan had been investigated “on suspicion of using or distributing heroin, morphine or other opiates during 2010 and 2011.”

Pentagon data analyzed by Breitbart News shows the number of U.S. troops testing positive for heroin has increased throughout the ongoing war in Afghanistan.

The DEA reported late last year that Mexican cartels are expected to continue unrivaled as “the greatest criminal drug threat to the United States,” adding that traffickers are making a concerted effort to increase heroin availability in the United States.