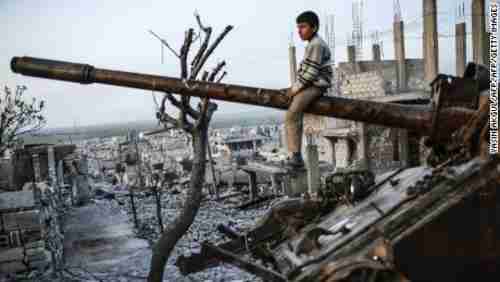 There are three different sets of forces operating in Syria: The Syrian regime + Russia, Turkey + the Free Syrian Army (FSA) comprised mainly of ethnic Syrian Turkmens, and the US-led coalition + the Syrian Democratic Forces (SDF) comprised mostly of Kurds from the People’s Protection Units (YPG). Today, these three forces are united by their common enemy, the so-called Islamic State (IS or ISIS or ISIL or Daesh).

On Tuesday, the US-backed SDF said that it had recaptured 90% of the city of Tabqa from ISIS. Tabqa is 45 km west of Raqqa, which is the ISIS stronghold, and the main objective of the current operations to defeat ISIS. ISIS captured Raqqa in January 2014.

The victory is significant because it further establishes the Kurdish YPG as the most effective fighting force in the region against ISIS. Al Jazeera

US military moves to protect Syrian Kurds from Turkey’s military

As we reported last week, Turkey’s warplanes in Syria struck Kurdish militias known as the People’s Protection Units, or YPG, who are allies of the US-led coalition fighting ISIS. The YPG said that Turkey’s airstrikes, which took place on Tuesday of last week, killed 20 of its fighters and wounded 18 others, and caused extensive damage to YPG headquarters and nearby civilian property.

The US military considers the Syrian Democratic Forces (SDF), comprised mostly of YPG Kurds, to be the most effective fighting force in the region against ISIS, but the YPG has links to the Kurdistan Workers’ Party (PKK), which has conducted numerous bloody terror attacks in Turkey, and an on-and-off civil war for decades. As a result, the US considers the YPG to be an ally, while Turkey considers them to be an enemy.

To protect the Kurds from the Turks, US troops in armored vehicles on Friday started patrolling Kurdish areas in Syria as a kind of “buffer” between the Kurds and Turkey. Video from the area shows vehicles with US and Kurdish flags together.

A statement from the US military says:

Coalition forces are conducting joint patrols along the northeastern Syria-Turkey border to assess reports from both the SDF and Turkey regarding skirmishes and cross-border fires between their respective security forces.

The patrols’ purpose is to discourage escalation and violence between two of our most trusted (counter-ISIS) partners and reinforce the U.S. commitment to both Turkey and the SDF in their fight against ISIS.

We ask both of our partners to focus their efforts on ISIS. ISIS poses the greatest threat to peace and stability in the region, and indeed the entire world.

Turkey’s president Recep Tayyip Erdogan says that he’ll meet with President Trump on May 16th, and he’ll say that US support for the YPG Kurds must end, and that the Turkish attacks on YPG Kurds will continue:

This needs to end. Otherwise we will have to take the matter into our own hands. It is better for them to live in fear than us being worried [about terror attacks from the PKK].

Erdogan said that Turkey needs to “drain the swamp,” and that Turkey’s military will solve the (PKK) terrorism problem by itself if the US refuses to do so.

As I’ve said in the past, the factions fighting in Syria today – the US, the Syrian regime, Russia, the Kurds, the Turks, and the “moderate” regime opposition – all these factions are united today because they’re all fighting the common enemy, ISIS. But once ISIS is defeated in Raqqa, ISIS’s headquarters, then all bets are off. AP and Anadolu (Turkey) and Daily Sabah (Turkey)