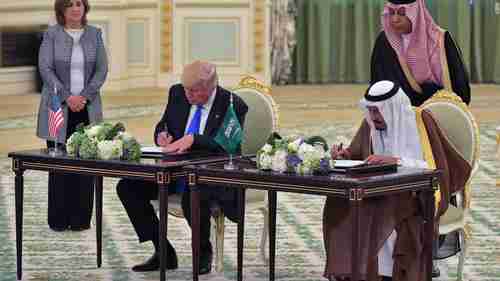 President Donald Trump’s harsh condemnation of Iran during Monday’s visit to Saudi Arabia has apparently triggered a renewal of a long-standing split between Saudi Arabia and Qatar, and within the GCC (Gulf Cooperation Council) in general. The GCC is an organization of Arab nations (Bahrain, Kuwait, Oman, Qatar, Saudi Arabia and the United Arab Emirates (UAE)) on the Arabian Gulf.

22. The two leaders also agreed on the need to contain Iran’s malign interference in the internal affairs of other states, instigation of sectarian strife, support of terrorism and armed proxies, and efforts to destabilize the countries in the region.

23. The two leaders also stressed that Iran’s interference poses a threat to the security of the region and the world, and that the nuclear agreement with Iran needs to be re-examined in some of its clauses. The Iranian ballistic missile program poses a threat, not only to neighboring countries, but also a direct threat to the security of all countries in the region as well as global security.

The next day, at a meeting with Israeli officials in Jerusalem, he said, “Most importantly, the United States and Israel can declare with one voice that Iran must never be allowed to possess a nuclear weapon – never, ever – and must cease its deadly funding, training and equipping of terrorists and militias, and it must cease immediately.”

Iran’s newly reelected president Hassan Rouhani called Trump’s appearance a “theatrical gathering with no practical or political value,” saying that “You can’t solve terrorism just by giving your people’s money to a superpower.”

Rouhani was alluding to the deals that Trump and Salman signed for Saudi Arabia to purchase $110 billion in weapons from the US.

Iran’s Foreign Ministry spokesman Bahram Qassemi called on Washington to abandon its “warmongering policy, intervention, Iranophobia and sales of dangerous and useless weapons to the main sponsors of terrorism.” White House and Reuters and CNN

The above reactions from Iran were to be expected and were just a repetition of the sorts of things that Iranian hardliners say about the United States every day. Nothing new there.

The reaction that created shocked waves was from Qatar, when Qatari emir Sheikh Tamim bin Hamad Al Thani was quoted as saying: “There is no reason behind Arabs’ hostility to Iran and our [Qatar’s] relationship with Israel is good.” The statement also praised the Muslim Brotherhood, as well as Iran’s puppet terrorist group, Hezbollah.

The statements were immediately picked up by media in Saudi Arabia and other GCC countries. An official in the UAE said:

Qatar favoring the MB and Iran over Saudi Arabia, the Emirates, Kuwait and Bahrain is a serious political crisis.

We concluded the summits in Riyadh, thanking God for uniting Arab, Islamic and international stances and the 3 summits were successful. However, we were surprised today to hear that Qatar’s stance has changed; we believe that is neither a suitable timing, nor suitable excuses or good statements. We ask Allah to guide Qatar.

Then there was a further surprise when Qatari Sheik al-Thani announced that he had never made any such comments, and that Qatar’s news websites had been hacked.

These claims were not universally believed. According to an editorial in the Gulf News:

Today, the GCC is faced with another challenge. And unfortunately, it is coming from within the ranks of the group. Shortly after the conclusion of last week’s GCC Consultative Summit in Riyadh, we were stunned by remarks, attributed to the Emir of Qatar, Shaikh Tamim Bin Hamad Al Thani, during a military ceremony on Tuesday, in which he appeared to defy not only the official GCC policies on most critical issues — particularly Iran, Hamas and Hezbollah — but also to hint that the American bases in Qatar were the only guarantee to safeguard his country from the “threat posed by some neighboring countries.”

While the three summits hosted by Saudi Arabia last Saturday and Sunday, in the presence of United States President Donald Trump and leaders of 57 Muslim countries, agreed that Iran was fuelling conflicts and sectarian tension in the region, Shaikh Tamim has been quoted by the Qatari official news agency as saying: “Iran represents a regional and Islamic power that cannot be ignored and it is unwise to face up against it. It is a big power in the stabilization of the region.”

At this point, it is not clear to me, an outsider, whether or not al-Thani actually made the referenced remarks. However, the alleged remarks have triggered a major backlash by other Arab countries, and many officials of those countries believe that the quoted remarks, whether real or not, actually represent Qatar’s policies.

In 2004, I reported several times about a major Mideast realignment, with Israel plus Egypt plus Saudi Arabia on one side, and Qatar plus Hamas plus Turkey on the other side. In March of that year, there was an extremely bitter split among GCC members. After a stormy GCC meeting, Saudi Arabia, the United Arab Emirates (UAE) and Bahrain recalled their ambassadors from Qatar

The trigger was the refusal of Qatar to support a security agreement that was adopted by the GCC several months earlier, requiring all members not to back “anyone threatening the security and stability of the GCC whether as groups or individuals – via direct security work or through political influence, and not to support hostile media.” In particular, Qatar has refused to implement three specific provisions:

When Mohammed Morsi and his Muslim Brotherhood government were in power in Egypt, then Egypt and Qatar had close relations, and Qatar was providing aid to Egypt. However, in July 2013, army general Abdel al-Fattah al-Sisi engineered a coup that overthrew Morsi, and later became president himself.

The split grew larger during the summer, when there was a 60-day war between Israel and Hamas in Gaza. Qatar and Iran strongly supported Hamas, while many people believed that Egypt was on the side of Israel and the Palestinian Authority.

Late in 2014, the vitriolic differences between the GCC countries were papered over, thanks to mediation by Saudi Arabia’s King Abdullah II, the the older brother of the current King Salman.

What has happened now is that all the vitriolic feelings of 2014 are resurfacing. It’s quite possible that this is a momentary blip, and that a way will be found in the next few days or weeks to paper those feelings over again, but the events of the last week prove that those feelings exist, and they can resurface and turn into conflict at any time, if a new event triggers them. AP and Reuters

If you live in Manchester, England, then you’re a “Mancunian.” Manchester was the site of the recent terror attack.