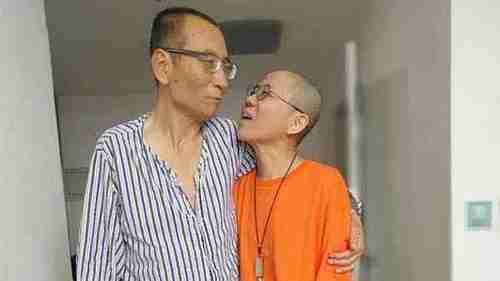 Iconic photo of Liu Xiaobo and his wife Liu Xia

Chinese censors and Chinese Communist Party officials have been working overtime to protect the Chinese people from learning anything about what happened to international peace activist and Nobel Peace Prize winner Liu Xiaobo, who died of liver cancer on Thursday after Chinese authorities for weeks refused to allow him to travel outside of China to receive care that might have saved his life.

Liu Xiaobo was present at the 1989 Tiananmen Square massacre in Beijing, where college students from all over the country had come for peaceful pro-democracy demonstrations. By coincidence, CNN was in Beijing for another reason, and the protests could be seen worldwide. I still recall those scenes live on CNN, and listening to Bernard Shaw, who was on the air almost 24 hours a day, saying that this was the most amazing thing he had seen in his life.

On June 4, the peaceful protests came to an end. The Chinese army came in and massacred thousands of college students who had come to Beijing for peaceful pro-democracy demonstrations. Liu Xiaobo’s extremely courageous act was to negotiate with the military to allow several hundred student protests to have safe passage and leave, rather than be slaughtered mercilessly. Liu was jailed for 21 months for calling for political reforms and greater freedoms for the people of China.

Liu was repeatedly jailed after that for supporting democracy in China. In 2008, he was arrested for drafting a democracy manifesto, and was never again free.

In 2010, Liu was awarded the Nobel Peace Prize for “his long nonviolent struggle for fundamental human rights in China.” At that point, his wife Liu Xia was also jailed and has been in jail ever since.

Now that he is dead, the Chinese censors are working night and day to make sure that the Chinese people are kept in complete ignorance. Social media posts mourning him are banned. A simple phrase like “RIP” is banned. An image of a burning candle is banned. Online searches that reference any aspect of his life are banned.

But Xi Jinping and the other CCP officials turn into whimpering fools at the thought of anyone in China commemorating the death of Liu Xiaobo. Or of posting an image of a burning candle. Or of wishing that he rest in peace. It’s really amazing.

By the way, here is a small bit of historical trivia. Liu was not the first Nobel Peace Prize winner to die while in prison. German pacifist Carl von Ossietzky, died in a hospital while held by the Nazis in 1938. CNN and Asian Age (India) and Mashable

Foreign ministry spokesman Geng Shuang said that Liu should never have been given the Nobel Peace Prize:

Conferring the [Nobel Peace] prize to such a person goes against the purposes of this award. It’s a blasphemy of the peace prize.

The Chinese are calling the awarding of the peace prize “meddling” in China’s national affairs. However, Berit Reiss-Andersen, Chairman of the Norwegian Nobel Committee, says that argument is not valid because human rights is an international affair, not a national affair:

When it comes to the argument of interference, the point of view of the Norwegian Nobel Committee is that our task is to hand out the Peace Prize. And we hand out the Peace Prize to the most deserving person of that year, who has contributed who has contributed to worldwide peace. Now the standard of human rights is not a national affair; it is an international affair. People have basic human rights, because they are people, and so this is not a valid argument in my point of view. And Nobel Peace Prize formally been handed out to other critics of their regimes in smaller countries, for instance, Aung San Suu Kyi [of Myanmar] and Lech Walesa [of Poland]. And this time in 2010 it was Liu Xiaobo and it was the first time a citizen of such a world power was handed the peace prize for human rights struggle, and the struggle for democratic reforms. It would have been cowardly of the peace prize if we were hesitant because our candidate came from a powerful nation, and if we only awarded prizes to individuals from smaller nations. And we do not look to that.

Much to the consternation of Chinese officials, on Friday, a number of countries issued statements highly critical of the Chinese government’s handling of Liu and commemorating his death.

In addition, many foreign leaders are demanding that Liu’s wife, Liu Xia, who has been under arrest since her husband won the Nobel Peace Prize in 2010, should now be freed from prison, and permitted to leave China.

A spokesman for Germany’s Chancellor Angela Merkel quoted her as saying: “I mourn Liu Xiaobo, the courageous fighter for civil rights and freedom of opinion. Deep condolences to his family.” Foreign minister Sigmar Gabriel said, “She and her brother, Liu Hui, should immediately be allowed to leave for Germany or another country of their choice if they wish to.”

Norway’s Prime minister Erna Solberg said: “It is with deep grief that I received the news of Liu Xiaobo’s passing. Liu Xiaobo was for decades a central voice for human rights and China’s further development. My thoughts go now to his wife, Liu Xia, and his family and friends.”

Canada’s foreign minister Chrystia Freeland said, “I offer my sincere condolences to the family and friends of Mr. Liu and to his many supporters around the world. In particular, my thoughts go to Mr. Liu’s wife, Liu Xia, herself a tremendous symbol of courage and poise, who remains under house arrest. We continue to call for the release of all political prisoners.”

These statements would not be all that important if it were for the fact that China is infuriated at them to the point of hysteria. Incredibly, China’s ministry spokesman Geng Shuang said that China was lodging official protests with these countries for interfering in China’s “judicial sovereignty.”

The European Union issued a statement saying, “We appeal to the Chinese authorities to allow his wife, Ms. Liu Xia and his family to bury Liu Xiaobo at a place and in a manner of their choosing and to allow them to grieve in peace.”

Now, that is an interesting request – allow Liu’s family to bury him at a place of their choosing. This is something that the paranoid CCP officials would never allow because they do not want Liu’s grave to become a place where pilgrims can come and conduct vigils. Chinese authorities will want to dump Liu’s body in as obscure a place as possible, and they may have him cremated.

We hope that the Chinese authorities can show confidence in engaging in political reform so that the Chinese can enjoy the God-given rights of freedom and democracy. This will be a turning point in cross-strait relations. The Chinese dream is not supposed to be about military might. It should be about taking ideas like those from Liu Xiaobo into consideration. Only through democracy, in which every Chinese person has freedom and respect, can China truly become a proud and important county.

Ma said that the DPP and its leader had lifted the deceptive veil of “maintaining the current situation,” attacked the mainland repeatedly and aggravated cross-strait conflicts, attempting to pull cross-strait relations back to tensity and turbulence.

Only people on the mainland have the right to judge the mainland’s political, economic and social development, said Ma, adding that the DPP should focus on and reflect on the chaos they have brought to the island and the harm they have done to cross-strait relations.

Americans have a special connection to Liu Xiaobo because he was living in America prior to the 1989 Tiananmen Square massacre, and returned to China at that time specifically to work for democracy in China. On Friday in Washington, Senator Ted Cruz is reintroducing a bill to change the name of the street in front of the Chinese Embassy in Washington to “1 Liu Xiaobo Plaza.” When similar legislation was being discussed last year, Chinese officials said that the bill would have “severe consequences” if passed. AFP and South China Morning Post (Hong Kong) and China Daily (Beijing) and Nikkei