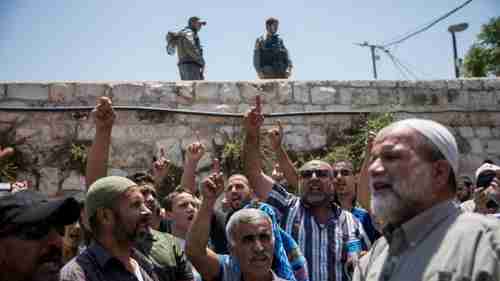 What is becoming increasingly clear is that the large Palestinian protests at the al-Aqsa Mosque in Jerusalem have gone way beyond the issues that initially provoked the protests.

On Tuesday, Israel’s security forces met the demands of the Palestinian protesters at the al-Aqsa Mosque / Temple Mount in Jerusalem by removing the metal detectors and cameras that had been installed following the deadly gun attack by three gunmen in the mosque on Friday morning, July 14, that resulted in the deaths of two Druze policemen.

Removing the metal detectors and cameras was supposed to solve the problem, returning everything to the status quo ante. Instead, the removal seems to have energized the young protesters, declaring a major victory against “occupiers,” and vowing to continue the protests.

One Palestinian is quoted as saying:

Today is a joyful day, full of celebration and sorrow at the same time – sorrow for the people who lost their lives and were injured.

We are under occupation and the al-Aqsa Mosque is a red-line to everyone in Jerusalem – actually, to everyone in Palestine, and all over the Muslim world – but much more for the people of [Jerusalem]. It’s dearer than their own lives.

To a large extent, the Palestinian leadership is increasingly seen as irrelevant to the “Oslo generation” that grew up after the 1993 Oslo accords that were supposed to bring peace to the Mideast. Instead, the Oslo accords are perceived as having accomplished nothing, and that perception is completely correct. The Oslo generation see the so-called “Mideast peace process” as nothing more than a failed series of humiliations for Palestinians, and proof that Hamas leaders and Palestinian Authority leaders are worthless.

The desire for revenge against Palestinian leaders and Israelis is palpable, and is now being expressed by means of protests at the al-Aqsa mosque / Temple Mount. The National (UAE) and Al Jazeera (Qatar) and Times of Israel

The Palestinian leaders can “see the way the wind is blowing,” and are hoping to increase their own credibility and popularity by encouraging the protests and inciting violence.

We are on the threshold of a big shift. What is going on today is not random or transient. It could be the beginning of a third intifada that is different from the others. What is unique about this is that it’s not individual actions, but a popular movement capable of attracting huge numbers of people. This popular momentum could recharge the Palestinian people. It may take time but we are on the way. It will override the PA. They don’t even know it exists. This will bring about a change in leadership.

Some 2,000 members of Hamas marched in the Gaza strip on Wednesday, declaring “victory” and calling for a new “day of rage” on Friday, not only in Jerusalem but throughout the West Bank.

We support you and are proud of you and of everything you have done. You are caring for and guarding the Al-Aqsa compound, and guarding your lands and your dignity and your religion and the holy sites. This is the appropriate reaction to anybody hurting our holy sites. Jerusalem is our capital and is our sovereignty, and what you did was the right thing. You stood as one man and we support you and support everything you do.

Abbas has also called on his Tanzim militia for an escalation of the struggle and for large-scale demonstrations against Israel. The Tanzim faction has been known for violence against Israeli forces in the past.

Turkey’s President Recep Tayyip Erdogan has fantasies of restoring the ancient Ottoman Empire and perhaps sees the al-Aqsa crisis as a way of gaining influence. On Tuesday, he urged all Muslims to visit Jerusalem to protect the holy places:

Anyone who has the opportunity should visit Jerusalem, Al-Aqsa mosque. Come, let’s all protect Jerusalem.

At one level, this is an incitement to protests and violence, as he’s encouraging all Muslims to travel to Jerusalem.

At another level, Erdogan’s incitement is a lot more ambitious. The country Jordan is in a partnership with Israel to administer the al-Aqsa mosque. Jordan is allied with the Saudis in the Saudi-Qatar crisis. Turkey is allied with Qatar and Hamas. So Erdogan’s incitement can be seen as a call for Turkey to replace Jordan as guardians of the al-Aqsa mosque. Middle East Eye and Times of Israel and Times of Israel