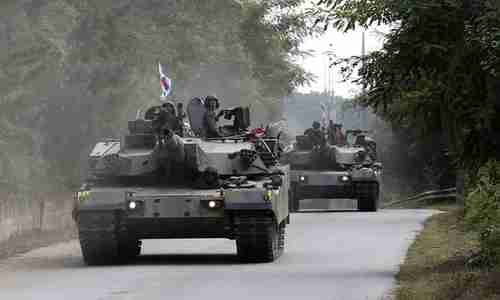 South Korean tanks take part in exercises in Paju, near the border with North Korea, on Monday. Donald Trump tweeted on Tuesday, ‘I am allowing Japan & South Korea to buy a substantially increased amount of highly sophisticated military equipment from the United States.’ (AP)

Russia’s president Vladimir Putin commented on the North Korea situation and the statements by American’s UN ambassador Nikki Haley, saying that North Korea is “begging for war,” and that the strongest possible sanctions must be used as quickly as possible.

Putin said that additional sanctions would be “useless” and could lead to a “planetary catastrophe.”

Ramping up military hysteria in such conditions is senseless; it’s a dead end. It could lead to a global, planetary catastrophe and a huge loss of human life. There is no other way to solve the North Korean nuclear issue, save that of peaceful dialogue.

We all know how this happened and people in North Korea remember well what happened in Iraq.

As I told my colleagues yesterday, they will eat grass but will not stop their (nuclear) program as long as they do not feel safe. What can restore their security? The restoration of international law.

I have to laugh when this war criminal Vladimir Putin appeals to international law. He invaded and annexed Crimea, and he supplies weapons to Bashar al-Assad, who uses them to kill innocent women and children in hospitals and schools, and who kills his own people with Sarin gas. Supplying weapons to a war criminal makes Putin a war criminal as well.

The Libya analogy is nonsense. At the time of the 2011 intervention, a major refugee crisis had already begun in Tunisia and Libya, with hundreds of thousands of people pouring into neighboring countries, and thousands crossing the Mediterranean to Italy. Muammar Gaddafi declared war on the protesters and was threatening genocide, especially in Benghazi. It was this refugee crisis that caused Libyans to demand a no-fly zone, and for the Arab League to do the same, after which the UN Security Council passed a resolution authorizing a no-fly zone, which turned into the 2011 military intervention. ( “5-Mar-16 World View — A look back at Libya in 2011 as the West debates another military intervention”) The invasion of Libya had nothing to do with genocide and millions of refugees, and had nothing to do with giving up WMDs.

The Iraq analogy is even more ridiculous. Apparently, Putin is a total idiot, or he thinks all of us are, because the lesson from the Iraq war is exactly the opposite of what he is claiming. The justification given for the Iraq invasion was that Saddam Hussein was developing WMDs, and would use them to kill perhaps millions of people.

So Kim Jong-un is doing exactly what Saddam Hussein did, and if there is an invasion of North Korea, it will be for exactly the same reason as the invasion of Iraq. So if Kim Jong-un wants to learn a lesson from Iraq, it should be to stop doing what he’s doing, which is the opposite of what Putin apparently believes. By inciting a new Korean War, Kim is inviting an invasion. That is how stupid Putin is.

So what is the bottom line? Putin wants North Korea to develop its nuclear arsenal, aimed at the United States, and not Russia. Putin would like to see the US military tied down to defending against NK’s nuclear arsenal or even have a repeat of the 1950s Korean War. Putin may even believe that that’s the route to restoring a new Soviet empire. As I said, the guy’s an idiot. Russia Today

I am proud of saying that just two days ago on the third of September, DPRK [North Korea] successfully carried out a hydrogen bomb test for intercontinental ballistic rocket under its plan for building a strategic nuclear force.

The recent self-defense measures by my country, DPRK, are a ‘gift package’ addressed to none other than the U.S.

The U.S. will receive more ‘gift packages’ from my country as long as its relies on reckless provocations and futile attempts to put pressure on the DPRK.

So Han says that North Korea is developing a nuclear arsenal to use against the United States for defense. Defense from what? An American invasion? North Korea already has an arsenal of conventional weapons lining the border with South Korea that could be used to destroy Seoul, and that would deter an American invasion if any were even contemplated.

Han’s statement is a clear incitement to war or, as Nikki Haley put it, North Korea is “begging for war.” As I described yesterday, this has been going on for a long time. In 2010, the North conducted two acts of war targeting South Korea: in May, North Korea torpedoed and sank the warship Cheonan, killing dozens of South Korean crew members, and in November, North Korea killed South Korean civilians by shelling Yeonpyeong Island. In both cases, the South Koreans chose not to respond, but it’s pretty clear that they might have.

North Korea’s ambassador Han Tae Song could have made a more conciliatory statement, but his threat of “gift packages” cannot have any possible outcome except to increase the probability of war.

As I wrote yesterday in my Generational Dynamics analysis, North Korea is not afraid of war and is encouraging war, apparently believing that they will win because of support from China. Furthermore, in this generational Crisis era, the people in both the US and China believe that they will win any war quickly. That is a recipe for “a global, planetary catastrophe and a huge loss of human life,” as Putin has suggested, though his solution of “dialogue” will not prevent it.

It is hard to see how Donald Trump has any choice. If North Korea is permitted to build a nuclear arsenal, and the US just sits there and does nothing to stop it, then it will be an enormous humiliation to Trump and to the United States, and will soon lead to war anyway. The die seems already to be cast. Reuters