WASHINGTON, DC – United States Ambassador to the United Nations Nikki Haley says President Donald Trump is both justified and has the authority to withdraw from the Iran nuclear deal should the commander in chief decide not to re-certify the Joint Comprehensive Plan of Action (JCPOA) late next month.

“I am not going to prejudge in any way what the president is going to decide next month,” Haley said at the American Enterprise Institute (AEI) on Tuesday. “While I have discussed it with him, I do not know what decision he will make. It is his decision to make and his alone.”

Haley said that while she was “not making the case for decertifying,” should the president decide to decertify “he has grounds to stand on.”

Haley, who recently met with Iran nuclear monitors in Vienna, noted that the decision to recertify a deal that the Obama administration designed “to be too big to fail” is a “complicated question.”

She did warn that if the Iranian regime continues down this path unchecked, the world will be “dealing with the next North Korea.”

“The truth is, the Iran deal has so many flaws that it’s tempting to leave it. But the deal was constructed in a way that makes leaving it less attractive,” the ambassador said. “It gave Iran what it wanted up-front, in exchange for temporary promises to deliver what we want.”

Haley said that if the President finds that he cannot, in good faith, certify Iranian compliance, it would signal to Congress that “either the administration believes Iran is in violation of the deal or the lifting of sanctions against Iran is not appropriate and proportional to the regime’s behavior or the lifting of sanctions is not in the U.S. national security interest.”

She added, “Under the law, Congress then has sixty days to consider whether to reimpose sanctions on Iran,” and “during that time, Congress could take the opportunity to debate Iran’s support for terrorism, its past nuclear activity, and its massive human rights violations, all of which are called for in Corker-Cardin.”

Then, Congress could debate whether the nuclear deal is, in fact, too big to fail.

Haley said the JCPOA is “a very flawed and limited agreement” and noted that the Obama administration knowingly “set up the deal in a way that denied us that honest and serious debate.” 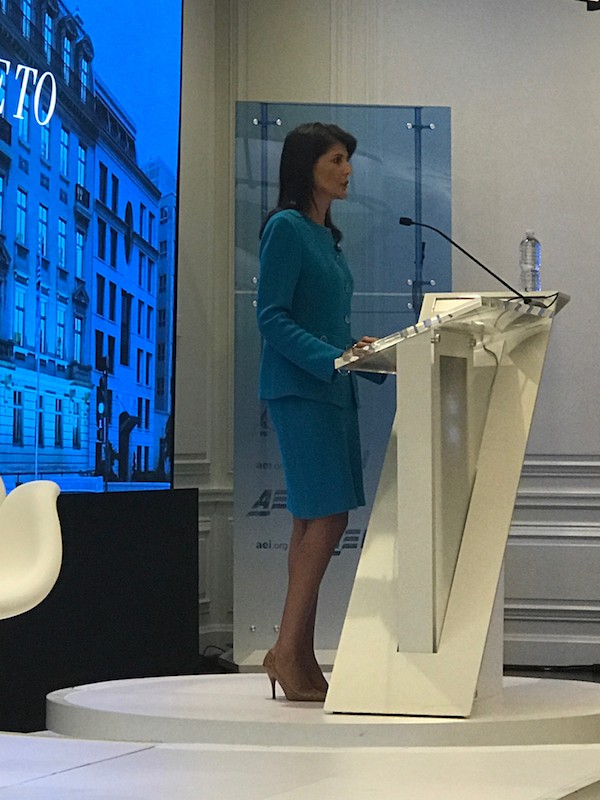 The agreement falls short of what was promised. We were promised an end to the Iranian nuclear program. What emerged was not an end, but a pause. Under the deal, Iran will continue to enrich uranium and develop advanced centrifuges. We were promised anytime, anywhere inspections of sites.

However, Haley pointed out that the promised inspections only apply to Iran’s declared nuclear sites.

With that, she alleged that Iran has long pursued nuclear weapons and has hidden its intentions all along. Without mentioning them by name, Haley noted that in 2002, Iranian dissidents – namely, the Mujahedin-e-Khalq (MEK) – revealed the existence of a uranium enrichment plant and heavy water reactors, which were both in violation of Iran’s Safeguard Agreement with the International Atomic Energy Agency (IAEA).

Breitbart News reported that the Iranian regime may be covertly developing its nuclear program in the “off-limits” Parchin nuclear site, according to evidence presented by an opposition group.

The Iranians have repeatedly stated that outsiders will never gain access to their military sites.

“The Americans should take the dream of visiting our military sites, using the pretext of the JCPOA or any other pretext, to their graves,” Velayati said.

Haley detailed numerous terrorist activities carried out by the Iranian regime since its forced inception in 1979. “The Islamic Republic of Iran was born in an act of international law breaking,” she said. Quoting Henry Kissinger, who famously said that Iran could not decide “whether it’s a nation or a cause,” Haley noted that Iran’s “cause” since 1979 has been “spreading revolutionary Shi’ite Islam by force; its main rally point has been and continues to be what it calls the ‘Great Satan,’ the United States of America.”

She reminded those gathered of how the Iranian regime, through its creation of Hezbollah, was responsible for the murder of 304 Americans during the 1983 bombing of the U.S. Embassy in Beirut and the U.S. Marine Barracks that followed; the 1985 hijacking of the TWA airplane, where a U.S. Navy Diver’s lifeless body was dumped onto the runway at the Beirut Airport; the 1988 murder of U.S. Diplomat Robert Higgins in South Lebanon; the 1994 bombing of the AMIA Jewish community center in Buenos Aires, Argentina, killing 85 people; the 1996 bombing of Khobar Towers in Saudi Arabia,which left 19 U.S. airmen dead; the 2005 assassination of Lebanese Prime Minister Rafic Hariri; the 2011 thwarted bombing plot the Iranians had planned to bomb a restaurant two blocks from AEI’s D.C. offices targeting the Saudi ambassador.

“Throughout the Iraq War, the number one killer of U.S. troops was improvised, explosive devices, or IEDs, the deadliest of which were supplied by the IRGC,” Haley said. “Thousands of American men and women were wounded or killed.”

Ultimately, Haley said Director General of the IAEA Yukiya Amano’s metaphoric description of the nuclear deal as a jigsaw puzzle was appropriate. “Director General Amano is a very capable diplomat, and he’s a serious person who clearly understands the critical nature of his task. He said that monitoring nuclear compliance with the nuclear deal is like a jigsaw puzzle; picking up just one piece doesn’t give you the full picture.” Haley added, “That’s a very appropriate metaphor, and it goes well beyond the work of the IAEA. It goes to the entire way we must look at Iranian behavior and American security interests.”

That puzzle might come a few steps closer to being solved next month with President Trump’s pending decision about certification.