All Saudis ordered to leave Lebanon, as Hariri’s fate is unknown 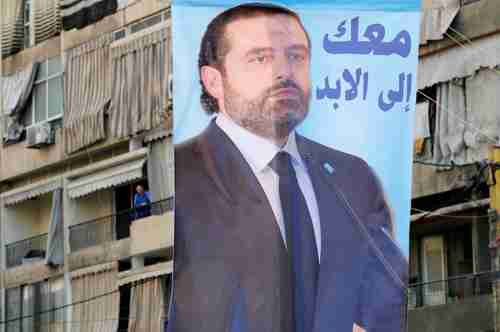 A poster depicting Saad al-Hariri, hanging in a neighborhood of his supporters in Beirut. The words say ‘With you forever.’ (Reuters)

While there are no concerns that Saudi warplanes will be flying over Lebanon tomorrow, the people of Lebanon are becoming increasingly anxious over what Saudi Arabia is planning, in view of the actions already taken.

This followed last week’s completely unexpected resignation of Lebanon’s prime minister, Saad al-Hariri, a resignation made all the more shocking by the fact that al-Hariri flew to Saudi Arabia and issued the resignation announcement over television from the Saudi capital city Riyadh.

In his resignation speech, al-Hariri denounced Iran and Iran’s puppet organization Hezbollah for sowing strife in countries around the region. He also said that he feared that they were planning to assassinate him, as they had assassinated his father with a bomb in 2005.

It is widely suspected among the people of Lebanon that al-Hariri is being held in Saudi Arabia against his will. In Lebanon’s capital city Beirut, politicians of all parties, including al-Hariri’s own party, are demanding that Saudi Arabia release him and allow him to return to Lebanon and explain why he resigned. Government officials are saying that they will not accept al-Hariri’s resignation until he returns and reaffirms it.

Saudi Arabia’s Foreign Minister Adel Al-Jubeir on Thursday explained in an interview what was going on from the Saudi point of view. He blamed the situation on Iran and Hezbollah, and on Hezbollah’s increasing control of the government of Lebanon:

Hezbollah put roadblocks in front of every initiative that Prime Minister Hariri tried to implement. Hezbollah has pretty much hijacked the Lebanese system. It has been the instrument that Iran used to dominate Lebanon, the instrument that Iran used to interfere with Syria, with Hamas, and with the Houthis. We see Hezbollah’s mischief all over the region. Hezbollah has been responsible for smuggling weapons into Bahrain. Hezbollah is involved in criminal activity, such as drug dealing and money laundering.

We are saying that the world has to make sure that we designate Hezbollah as a terrorist organization. There can be no difference between a political wing and a militant wing. The world needs to take action in terms of curtailing Hezbollah’s activities, and the world needs to push back against Hezbollah wherever they operate. We cannot allow Lebanon to be a platform from which harm comes to Saudi Arabia.

The Lebanese people have been dominated by Hezbollah and we need to find a way to help the Lebanese people come out from under the thumb of Hezbollah. We cannot allow Lebanon to be a base from which attacks against Saudi Arabia can take place and we are urging the Lebanese government in particular to take firm and resolute action against Hezbollah.

Keeping Hariri with restricted freedom in Riyadh is an attack on Lebanese sovereignty. Our dignity is his dignity. We will work with (foreign) states to return him to Beirut.

What the people of Lebanon fear most is that their country will now join Syria as the site of a proxy war between Shias, led by Iran, versus Sunnis, led by Saudi Arabia. Arab News and Newsweek and Reuters

Yemen has been engulfed in a proxy war between Saudi Arabia and Iran-backed Houthi rebels since 2014. The war has already killed more than 10,000 and displaced millions, with around 500,000 cholera cases reported in the country since the worst outbreak in decades started in April. Saudi Arabia has been bogged down in the war, making little progress, and has already been accused of creating a humanitarian disaster.

On Saturday last week, the Houthis launched a ballistic missile that reached the King Khalid International Airport near Riyadh, about 800 km from the Yemen border. The Saudis were able to intercept it with with a surface-to-air Patriot missile but called it a ‘dangerous escalation’ in the war. The missile attack has been considered a game-changer in the war because it was clearly an Iranian ballistic missile, and because of the distance it traveled and its accuracy.

On Monday, Saudi Arabia responded by blockading all air, land, and sea routes into and out of Yemen, in order to prevent Iran from sending weapons into Iran.

On Wednesday, UN humanitarian chief Mark Lowcock said that the blockade would cause the worst famine since World War II:

Saudi Arabia is in a generation Crisis era and apparently in a state of complete desperation in fighting Iran, and we can really see that its actions may include the most extreme levels of atrocities. We have already seen this in Syria, where the country’s sociopathic Shia/Alawite president Bashar al-Assad has used Sarin gas on innocent Sunni civilians, and with the help of Russia, Iran and Hezbollah, has committed genocide against innocent Sunni women and children in Syria.

And now it seems likely that Lebanon, which has always been a fragile country anyway, will be pulled into the same Sunni-Shia proxy battles as the other countries. In this generational Crisis era, the Mideast civilization seems to be collapsing, plummeting into the same pit of atrocities, slaughter, and famine that has plagued it for centuries, possibly for millennia.

Generational Dynamics predicts that the Mideast is headed for a major regional war, pitting Sunnis versus Shias, Jews versus Arabs, and various ethnic groups against each other. Generational Dynamics predicts that in the approaching Clash of Civilizations world war, the “axis” of China, Pakistan, and the Sunni Muslim countries will be pitted against the “allies,” the US, India, Russia, and Iran. BBC and CNN and Washington Post