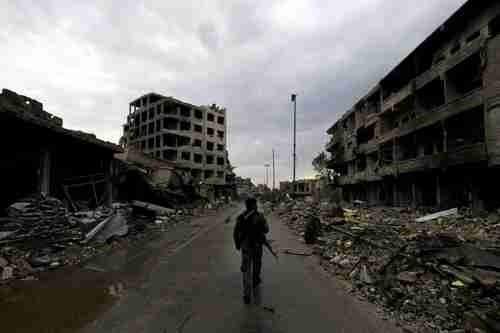 A picture of Raqqa taken on October 28 (AFP)

Calling it “the dirty Raqqa deal that no one wants to talk about,” the BBC has found that the US-led coalition military issued extremely misleading statements last month, when the so-called Islamic State (IS or ISIS or ISIL or Daesh) was evacuated from Raqqa, the capital of their self-styled caliphate.

It was in November of last year that the coalition made a surprise announcement that an operation would begin to recapture Raqqa from ISIS. The announcement was controversial because the principal fighters would be from the Syrian Democratic Forces (SDF), comprising a majority of Kurdish fighters and a minority of Arab fighters, backed by American warplanes. Turkey was particularly opposed to the participation of the Syrian Kurds, whom the Turkish government considers to be all terrorists. However, the Kurds were chosen because the US considers them to be the best and most effective fighting force in Syria versus ISIS.

By September of this year, there was widespread reporting that the SDF had almost entirely recaptured Raqqa from ISIS, and that total victory was only a few days away. However, in mid-October, there was another surprise announcement: Instead of killing or capturing all the ISIS fighters in Raqqa, they would be permitted to leave and go to live elsewhere.

I wrote briefly about this evacuation deal last month when it was announced. I went back to my news article archive to reread the articles that I had used as sources at the time. According to these articles:

This sanguine description has been contradicted in several ways by the BBC report. The reporter, Quentin Sommerville, visited Raqqa and followed the path that the bus convoy took last month into Deir az-Zour. He interviewed dozens of people who were either on the convoy, including bus drivers, or observed it, and to the men who negotiated the deal.

Sommerville reported the following, based on interviews with witnesses and bus drivers and on amateur video:

According to Sommerville, interviews with human smugglers working on the Syria-Turkey border have revealed a surge in people trying to cross the border into Turkey. It is feared that some wish to return to their home countries in Europe and Russia to continue the jihadist fight.

The BBC says that once the Raqqa investigation was completed and the facts were presented to the coalition military, they confirmed them. Al Araby (UK, 15-Oct) and BBC and Daily Sabah (Turkey) and Daily Mail (London)

It was a year ago that the army of Syria’s psychopathic president Bashar al-Assad, backed by Russia’s air force, was determined to slaughter as many of the 275,000 residents of Aleppo to be killed, even though only all but a few thousand were innocent civilians. Syrian and Russian warplanes bombed hospitals, schools, and civilian neighborhoods even in cities where al-Nusra was never present. ( “7-Oct-16 World View — UN Syria envoy Staffan de Mistura predicts total destruction of Aleppo by Christmas”)

The violence against Aleppo and other western cities was to have ended as a result of the “de-escalation zone” agreement reached by Russia, Iran, and Turkey, meeting in Astana, Kazakhstan. However, the agreement never really had a chance, because al-Assad opposed it.

So it is not surprising that al-Assad is repeating these genocidal attacks on the Sunni Muslims that he hates, this time in East Ghouta.

Ghouta has always been particularly hated by al-Assad. In 2013, he ordered what a United Nations investigation found to be ‘large scale’ use of Sarin gas on the people of Ghouta,’ including women and children.

According to Jan Egeland, the UN Special Envoy for Syria:

I feel as if we are now returning to some of the bleakest days of this conflict again. …

Nowhere is it as bad as in eastern Ghouta, which is the area just next to the capital Damascus city, it is in rural Damascus, east of the capital. This epicenter of suffering has 400,000 civilians, men, women, and children, in a dozen besieged towns, and villages.

Winter is coming, winter in Syria is as hard as it is in Europe, the difference between in Europe and in Syria is that people are now sitting after a 7-year war, longer than the second World War, they have little, if no, reserves, they have no heat in the house, they live in a ruin, it will be a horrific winter. In eastern Ghouta the price of a food basket is ten times that of the average in the country, so people cannot afford food and that will be their situation as the harsh winter is coming.

We can assume that we are going to see a repeat in Ghouta that we saw last year in Aleppo. As I have written many times, al-Assad is the worst genocidal leader so far in the 21st century, and the war in Syria will continue as long as he’s in power.

There is an interesting contrast between the two stories presented in this article.

In Aleppo, and probably in Ghouta, al-Assad and Russia are using the ‘Grozny Model’ to pursue mass slaughter, as Russia used against Grozny in its 1990s war against Chechnya.

But in Raqqa, rather than commit mass slaughter against civilians, the SDF and the coalition allowed the ISIS fighters to escape and even provided transportation for them.

So we have two similar situations, but two different military strategies. Perhaps one day historians will look back at this time to decide which strategy was the best. United Nations and Syria Direct and Al Araby (UK)

As this article is being written on Tuesday evening ET, there is an apparent military coup in progress, as soldiers have reportedly taken over the headquarters of Zimbabwe’s national broadcaster, ZBC, in the capital city Harare. Heavy gunfire and artillery have also been heard, as well as loud explosions.

The coup attempt was apparently triggered when Robert Mugabe, the 93-year-old president, sacked the VP so that his wife can succeed him.