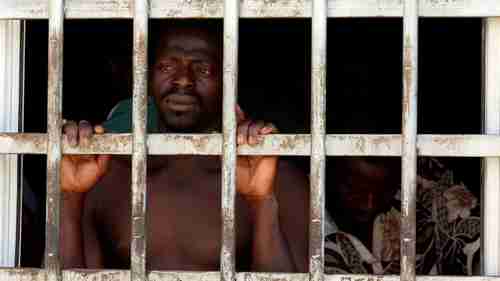 Reporters carried concealed cameras to a slave auction just outside Tripoli, the capital city of Libya. They witnessed a dozen men auctioned off in the space of six or seven minutes.

That auctioneer says, “Does anybody need a digger? This is a digger, a big strong man, he’ll dig. What am I bid, what am I bid?”

The bidding goes on, and the man is auctioned off for $400-1000. Within minutes, the man is handed over to his new “master.”

The men are migrants who had come from countries like Niger, Chad, Mali, and Algeria, and paid sometimes thousands of dollars to human traffickers to take them to Libya. Once in Libya, they would have to pay another human trafficker to put them onto a dangerously overcrowded boat, where they hope to reach Italy. But if they run out of money in Libya, then they can be imprisoned in detention camps, or sold as slaves.

The CNN video and revelations about the slave trade in Libya resulted in sometimes violent protests in Paris, when over a thousand protestors demonstrated outside Libya’s embassy in Paris, carrying banners saying, “No to slavery in Libya.” The protestors threw stones at the police tried to break into the embassy, and the police fired tear gas.

The demonstration was called by the Collectif contre l’esclavage et les camps de concentration en Libye (CECCL – the Collective against Slavery and Concentration Camps in Libya), set up in Paris after the CNN video was broadcast.

On Tuesday, the UN Security Council approved a resolution urging tougher action to crack down on human trafficking and modern slavery worldwide. CNN (14-Nov) and Reuters and Libya Herald and Africa News and AP

More than 600,000 people from Africa, Asia, and the Middle East have arrived in Italy since 2014, and a record 180,000 refugees crossed the Mediterranean from Libya to Italy in 2016, but instead of setting a new record in 2017, the number of refugees has fallen substantially, thanks to deals that Italy’s government made with Libya’s tribes, warlords, and coast guard.

Under the deals, Italy pays money to tribal militias and officials to prevent refugees from entering Libya or, once there, to detain them and prevent them from proceeding further on their trip to Europe.

These deals have been heavily condemned by human rights organizations as inhumane because it leaves the refugees vulnerable to abuse, and the slave auctions are being pointed to as evidence not only of abuse, but of a return to a slave trade that was supposedly a remnant of the past.

However, the fact still remains that the policy, however cruel and inhumane, has led to a sharp drop in migrants reaching Italy, which is the outcome that Italian officials were seeking, especially after other EU countries refused to accept any of the refugees themselves.

“The suffering of migrants detained in Libya is an outrage to the conscience of humanity,” according to the UN. However, Italy’s interior minister Marco Minniti defended the policy:

The alternative cannot be to resign ourselves to the impossibility of managing migratory flows and hand human traffickers the keys to European democracies.

[The human rights issue] is, was and will be a question we will not relinquish, but we know that condemning (abuses) is not enough, we must act.

Minniti did not specify any details, but he may be referring to a “revolutionary” proposal put forth by Italy’s foreign minister Angelino Alfano two months ago. Under the plan, refugees in Libya would be evaluated, and 50,000 of the most vulnerable would be resettled in other countries. This plan sounds like wishful thinking, since a quota plan adopted by the European Union in 2014 has been a complete failure, because many EU countries refused to accept refugees for resettlement. AFP (15-Nov) and AFP (29-Sep)