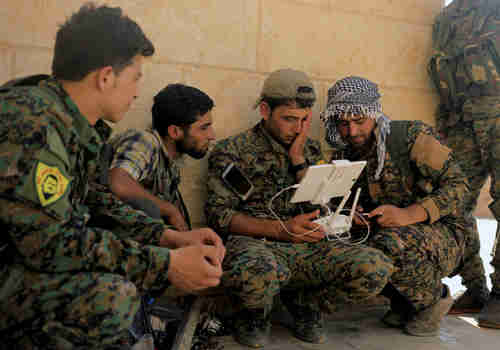 The U.S.-led coalition against ISIS in Syria is training a force of 30,000 fighters, mostly drawn from the existing predominantly Kurdish Syrian Democratic Forces (SDF), in order to form a “Syrian Border Force” (BSF) to prevent a resurgence of the so-called Islamic State (IS or ISIS or ISIL or Daesh).

The purpose of the BSF is to avoid repeating what is seen to be a blunder made by President Barack Obama in 2011, when American troops were withdrawn from Iraq with no continuing presence to prevent the spread of a new insurgency. Many people refer to that as a blunder by Obama that permitted the spread of the ISIS insurgency in Iraq. The intention is that the new BSF will prevent a similar blunder in Syria, now that ISIS is no longer in control of Raqqa.

The Coalition is working jointly with the Syrian Democratic Forces (SDF) to establish and train the new Syrian Border Security Force (BSF). Currently, there are approximately 230 individuals training in the BSF’s inaugural class, with the goal of a final force size of approximately 30,000.

The base of the new force is essentially a realignment of approximately 15,000 members of the Syrian Democratic Forces to a new mission in the Border Security Force as their actions against ISIS draw to a close.

As Veale’s statement suggests, the training has already been going on for some time. In fact, this is a follow-up from a statement made on December 22 by U.S. Army Gen. Joseph Votel, head of U.S. Central Command. Votel pointed out that Russia’s president Vladimir Putin had declared early in December that ISIS was defeated in eastern Syria, but then ISIS took over six villages in the area just days later.

Votel confirmed, for the first time, that there were 2,000 American troops in Syria, and said that they will be training “border security forces” in Syria:

[The border security forces] will help prevent resurgence of ISIS and will help bring control. We do it right where it’s needed [in Syria].

You just can’t go in and have a fight and drop a bunch of bombs and then step away from it and think that the problem is solved. This is a reminder of just how resilient and capable this organization [ISIS] is, and how we have to really make sure, as we complete these operations, that we’ve done it very thoroughly.

The training would include instruction in interrogation, screening, biometric scanning, and other skills to help identify insurgents who may be trying to cross into Syria from neighboring countries, now that the emphasis is on stabilization and peacekeeping, not fighting.

There were 230 individuals who were trained in the program announced in December. The U.S. considers the SDF and the Kurdish fighters to have been the most effective fighting force against ISIS, better than Turkish forces and Syrian forces. So 15,000 hardened fighters in the SDF will initially be realigned to a new mission in the Border Security Force, and additional fighters will be recruited and trained, to bring the total BSF force to 30,000.

The BSF will be responsible for patrolling the borders of a region stretching from the Euphrates River Valley in the east to the Iraq border in the west, and north to the border with Turkey.

The ethnic composition of the force will vary relative to the areas in which it serves, with efforts taken to ensure that people serve close to their homes. This all but guarantees that Kurds, who make up a majority of the population in northeastern Syria, will be establishing checkpoints along the roughly 820-kilometer (510-mile) Syria-Turkey border, while more Arabs will serve in areas along the Euphrates River Valley and along the border with Iraq. The Defense Post (13-Jan) and AP (22-Dec)

Turkey has been complaining for almost two years that, while the Kurdish forces in the SDF were fighting ISIS in Raqqa, they could also be preparing for new terrorist attacks in Turkey itself. The Kurds in the SDF are affiliated with the Kurdistan Workers’ Party (PKK), which conducted an insurgency within Turkey for three decades, and which has perpetrated major terror attacks within Turkey during the last three years.

Turkey’s president Recep Tayyip Erdogan said on Saturday that Turkey will attack the Kurdish forces, and clear its border of “terrorists.” That remark apparently was not referring to Kurdish forces in the BSF region, but rather to Kurdish forces in Afrin, and also to Iraq. However, Erdogan also criticized the U.S. support of the SDF:

Making a terrorist wear a uniform, and flying your country’s flag over the buildings they use, does not change any facts. Thousands of weapons sent to the region are already on the black market and some of them are being used against us.

The United States has admitted that it has created a terrorist force along our country’s border. Our duty is to drown this army of terror before it is born.

Erdogan is threatening an imminent military attack on Kurds in Afrin, Manbij, and other targets in northern Syria. However, he’s made such threats before without carrying through.

Russian officials are angered by the BSF announcement because they see that it has no other purpose than to partition Syria permanently:

In fact, that means separation of a huge territory along the border with Turkey and Iraq. The actions we currently see indicate that the United States does not want to keep the territorial integrity of Syria. We see not the desire to help to extinguish the conflict as soon as possible, but rather the desire to assist those who want to take practical steps for regime change in the Syrian Arab Republic.

What it would mean is that vast swaths of territory along the border of Turkey and Iraq would be isolated, it’s to the east of the Euphrates river. There are difficult relations between Kurds and Arabs there. If you say that this zone will be controlled by the forces supported by the US, there will be a force of 30,000 people.

There is a fear that they are pursuing a policy to cut Syria into several pieces.

Not surprisingly, Syria’s foreign ministry denounced the plan for the Border Security Force:

Syria strongly condemns the U.S. announcement on the creation of militias in the country’s northeast, which represents a blatant attack on the sovereignty and territorial integrity and unity of Syria, and a flagrant violation of international law.

Syria considers any Syrian who participates in these militias sponsored by the Americans as a traitor to their people and nation, and will deal with them on this basis.

Generational Dynamics predicts that the Mideast is headed for a major regional war, pitting Sunnis versus Shias, Jews versus Arabs, and various ethnic groups against each other. Generational Dynamics predicts that in the approaching Clash of Civilizations world war, the “axis” of China, Pakistan and the Sunni Muslim countries will be pitted against the “allies,” the US, India, Russia, and Iran.

This prediction indicates that the current alliance between Turkey and Russia will end at some point soon. Daily Sabah (Ankara) and AP and Russia Today and Al Jazeera