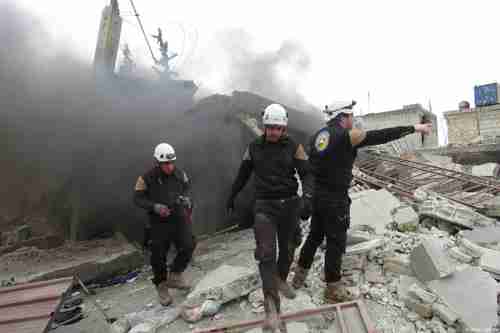 Russia’s president Vladimir Putin wanted to be the world-renowned diplomat that brought peace to Syria. So last year he blew off the UN-sponsored peace talks led by Staffan de Mistura, and he joined with Iran and Turkey to form his own “peace talks” process held in Astana, Kazakhstan. And they came up with a peace plan.

Of course, the peace plan was rejected by the parties actually fighting in Syria: the Syrian regime led by the psychopathic president Bashar al-Assad, the “moderate” anti-Assad opposition in Syria, the al-Qaeda linked Hayat Tahrir al-Sham (HTS), formerly Jabhat al-Nusra, al-Nusra Front, and the so-called Islamic State (IS or ISIS or ISIL or Daesh). All of those four groups rejected the peace plan, so it was ridiculous for Putin or anyone else to believe that the peace plan would work.

And it didn’t. They came up with four “de-confliction zones” or “ceasefire zones.” The fighting slowed down a little in these four zones for a little while, but today the whole agreement is in shambles, as the fighting is in full force. It is a total failure by Vladimir Putin.

There was a meeting of Putin’s peace plan group in Sochi on Tuesday that Putin was calling the “Syrian National Dialogue Congress.”

The meeting was supposed to take two days, but it was called off after one day, when Syrian opposition representatives heckled Putin’s right-hand man, Russia’s foreign minister Sergei Lavrov, and then walked out.

There was an additional drama at the Sochi airport. Some opposition members arrived at the airport but refused to go to the conference hall because they saw pictures of Syrian flags there. They decided that the fix was in.

Opposition members point out that Bashar al-Assad’s army is still using barrel bombs and chlorine gas on civilians, is targeting hospitals and schools, is preventing food and medicine from reaching civilians, has ignored ceasefires, and has broken every promise to stop doing these things. So opposition members know that Russia and al-Assad are just going to screw them again, so why bother with this so-called “peace conference”?

Putin announced in December that the Syrian war was over and that Russia’s troops will be returned to Russia. Less than two months later, it is clear that Putin’s announcement was garbage. Reuters and CNN and Tass (Moscow)

I have written about any number of Syria peace plans over the years. Kofi Annan, the virulently anti-American former Secretary-General of the United Nations from Ghana, was the first UN envoy on Syria. Annan formulated a farcical six-point “peace plan” which said absolutely nothing, but which al-Assad used as a cover to continue exterminating innocent Sunni women and children with impunity.

After Kofi Annan was repeatedly humiliated by Bashar al-Assad, the UN appointed a new Syria peace envoy, Lakhdar Brahimi, to replace Kofi Annan. Brahimi was not as much of an idiot as Annan was, but he still resigned in disgust in May 2014, after it became clear that al-Assad really had no desire to do anything but exterminate Sunni civilians. Now, the current UN envoy is Staffan de Mistura, who goes around all the time saying, “This will not be tolerated,” but who accomplishes nothing except, again, to provide cover for Bashar al-Assad’s atrocities.

So Vladimir Putin took over the peace process business. The UN processes held out a fig leaf of being impartial, but Putin was clearly and unequivocally in favor of Bashar al-Assad and committed to supporting his genocide and war crimes while claiming to be promoting peace.

So to complete the farcical circle, de Mistura attended the Russian conference in Sochi under the condition that Russia promised that the United Nations would be responsible for drafting a constitution and the mediation process. Putin apparently agreed, and now the mantle of failure will pass from Russia back to the United Nations. Guardian and Russia Today

If you want to kill someone in Syria, it is perfectly OK as long you call him or her a “terrorist.”

So Turkey is committed to killing all the Kurdish People’s Protection Units (YPG) militias in Syria, calling them “terrorists.” Turkey’s president Recep Tayyip Erdogan is very critical of the US for arming and supporting the YPG, whom the US army found to be essential in fighting and defeating ISIS in Raqqa.

Turkey was supposed to have defeated the YPG in Afrin by now, but the battle is taking longer than they expected. Assuming that they ever defeat the YPG in Afrin, the plan is to proceed further east to Manbij, where they will apparently meet American forces who are defending the YPG.

Meanwhile, the regime of the Shia/Alawite Bashar al-Assad, backed by Russian bombers, is killing his own “terrorists,” namely innocent Sunni women and children in two “de-confliction” or “ceasefire zones,” Eastern Ghouta and Idlib. Al-Assad continues to commit war crimes, in cooperation with Hezbollah, Iran, and Russia.

Ironically, al-Assad is being helped by Erdogan because Turkey used to be a protector of the civilians in Idlib but is now distracted by the fight against the YPG in Afrin.

There is a fantasy, apparently widespread, that one way or another the Syria war will end at some point soon, and then Syria will return to “normal,” just as it was before al-Assad started the war by trying to exterminate peaceful protesters in 2011. And, in fact, Syria is in a generational Awakening era, and so the war should have (and would have) fizzled out within a year or two.

But now you have multiple countries – Russia, Iran, Hezbollah, Turkey, the US, Israel, and others – and you have multiple factions within Syria – YPG, HTS, ISIS – all wanting a piece of Iraq, or at least wanting to make sure that some other faction doesn’t get a piece. Each faction believes that the war will end soon, but each faction expects a different outcome.

As I have been writing for years, Generational Dynamics predicts that the Mideast is headed for a major regional war, pitting Sunnis versus Shias, Jews versus Arabs, and various ethnic groups against each other. Generational Dynamics predicts that in the approaching Clash of Civilizations world war, the “axis” of China, Pakistan and the Sunni Muslim countries will be pitted against the “allies,” the US, India, Russia, and Iran.