With regard to the last point, I have heard several interviews with civilians in Ghouta about whether they were going to take advantage of the opportunity to leave Ghouta. They all said pretty much the same thing, that they do not feel safe trying to do so.

This is not surprising, since they are all pretty much aware of what happened in late 2016 in Aleppo, and two of them actually mentioned that. Allowing civilians to leave is part of the Syrian-Russian strategy. Civilians were allowed to leave Aleppo, and travel to Idlib, where they were killed en masse by Syrian and Russian airstrikes.

In fact, I have described this strategy several times before. It is called the “Grozny model,” named after the capital city of Chechnya and the battle of Grozny. The Russians created a “safe zone” to allow civilians to escape the Grozny siege, and then killed them as they were escaping.

So in the end, this “ceasefire” in Eastern Ghouta is not a ceasefire at all and was never intended by the Russians to be a ceasefire. Instead, it provides political cover for an intensification of the war crimes against civilians. There are 400,000 people living in Ghouta, mostly women and children. There are at most 1,000 fighters who might be called “jihadists and terrorists.” Russia and Syria are going to use the 1,000 fighters as a reason to kill as many of the 400,000 civilians as they can.

An analogy in America would be if an American city contained some people from the Black Panthers or Black Lives Matter, then it would be OK, using the Syrian-Russian strategy, for the army and air force to exterminate hundreds of thousands of people in the black neighborhoods in that city, or maybe to permit some of them to escape, and then slaughter them as they leave.

According to an unreleased United Nations report, Syria’s president Bashar al-Assad is receiving supplies from North Korea for supplies to be used to manufacture chemical weapons. These supplies include acid-resistant tiles, valves, and thermometers.

We can assume that North Korea is selling this technology to Syria to make money and get around UN sanctions. We can also assume that either Iran or Russia is providing the money to Bashar al-Assad. Who knows? Maybe it is some of the money that Iran has gained from the removal of sanctions after signing the nuclear deal.

At any rate, we can be pretty certain that if North Korea is able to complete its development of nuclear weapons and long-range ballistic missiles, then it will sell that technology to any rogue state willing to pay for it. CNN and Axios

Areas of control in Syria and Iraq 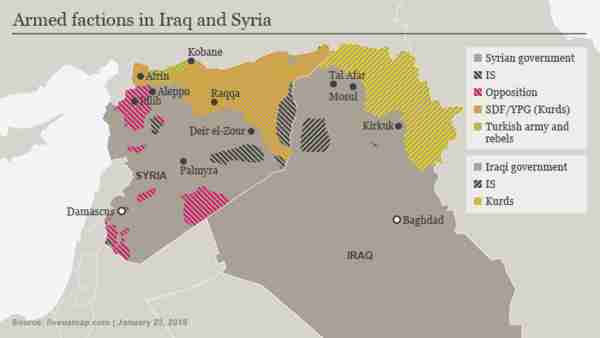 I wanted to reference this map because it is one of the best that I have seen, and easiest to understand what is going on.

There are several things that one can see from the map:

This is a country in complete chaos, with a war criminal and sociopathic genocidal leader, Bashar al-Assad, and with a proxy war that’s nowhere near ending.

As I have written many times, Generational Dynamics predicts that the Mideast is headed for a major regional war, pitting Sunnis versus Shias, Jews versus Arabs, and various ethnic groups against each other. Generational Dynamics predicts that in the approaching Clash of Civilizations world war, the “axis” of China, Pakistan and the Sunni Muslim countries will be pitted against the “allies,” the US, India, Russia and Iran. Deutsche Welle