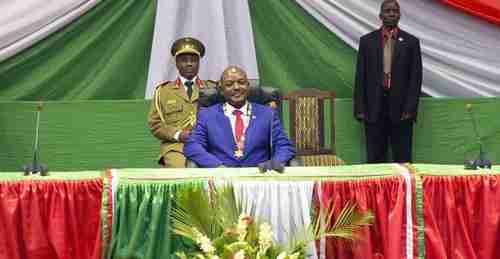 Burundi’s president Pierre Nkurunziza, who calls himself the “eternal supreme guide” of Burundi, on Sunday signed a decree setting May 17 as a date for a national referendum to change the constitution to permit him to stay in office until at least 2034.

There is little doubt that Nkurunziza will win approval on the referendum vote, because he will use violence and jailings of the opposition, and probably vote-rigging as well.

Nkurunziza should have stepped down as leader in 2015 since the constitution limits any leader to two terms. When Nkurunziza announced that he would run for a third term, his police force used bullets, tear gas and water cannons to control the protests.

Most people are familiar with the Rwanda genocide of 1994, the massive genocide where ethnic Hutus killed close to a million ethnic Tutsis. As I described in 2015 in the “Generational history of Hutu and Tutsi tribes”, that war also extended to the same tribes in neighboring Burundi and Uganda. When the war ended, the Tutsis took power in Rwanda and Uganda, and the Hutus took power in Burundi.

In all three countries – Rwanda, Burundi, and Uganda – the respective leaders have ignored their constitutions and used violence to stay in power. Africa News and Reuters

Reports of Trump-Kim meeting in Finland unconfirmed so far

There have been numerous speculative reports in the media in the last two days that the much-discussed meeting between president Donald Trump and North Korea’s child dictator Kim Jong-un will take place in Helsinki, Finland.

This speculation is occurring because a meeting has been scheduled this week in Helsinki for three teams of diplomats, respectively from the three countries North Korea, South Korea, and the United States.

Apparently, this meeting was set up during a visit by North Korea’s foreign minister Ri Yong Ho to Sweden last week. That visit resulted in speculation that the Trump-Kim meeting would occur in Sweden, but now the speculation has moved to Finland. However, many analysts believe that Kim Jong-un will not be willing to travel that far and that the meeting, if it occurs, will actually occur just south of the DMZ in South Korea.

Some interesting news came out of a CBS News interview with South Korea’s foreign minister Kang Kyung-wha, recorded on Saturday and broadcast on Sunday.

As we have suggested a couple of times in the past, Kim Jong-un’s silence about the possible meeting has been caused by being surprised at Trump’s quick acceptance of the invitation. Kang was asked whether she has heard anything from North Korea about the meeting:

Well, nothing publicly. But there is a channel of communication now established. So I’m sure there are back and forth messages. But, I think the North Korean leader would also need some time given the readiness with which President Trump has accepted the invitation to talks. I think we were all quite surprised by – by the – the readiness of that decision. I think it was an extremely courageous decision on the part of President Trump. We believe the North Korean leader is now taking stock. We give them the benefit of the doubt, and the time that he would need to come out with some public messaging.

I interpret this response to mean that she does not have a clue whether Kim plans to go through with the meeting with Trump.

Another issue has to do with preconditions for the meeting. When Trump first accepted, there were no preconditions. However, the next day, Trump’s spokeswoman said that some preconditions would have to be met, namely some “concrete and verifiable actions” in the direction of denuclearization.

So Kang was asked “What conditions do the North Koreans have to meet before this conversation happens?”, and she responded:

Well, in effect they already have. We have asked the North to indicate in clear terms the commitment to denuclearization, and he has in fact conveyed that commitment.

He’s given his word. But the significance of his word is – is quite – quite weighty in the sense that this is the first time that the words came directly from the North Korean supreme leader himself, and that has never been done before.

So let me get this straight. Kim Jong-un has not confirmed that there will be a meeting, but he has “given his word” that he will meet the preconditions of his “commitment to denuclearization.” And, of course, giving his word is quite different from “concrete and verifiable actions.”

Obviously, this is all fatuous political nonsense, mixed in with a lot of desperate wishful thinking on the part of the South Koreans.

Perhaps the coming three-way meeting in Helsinki will change things, but right now the most likely scenario is that Kim is simply using the meeting invitation as a ploy to gain time to complete his development of nuclear weapons and ballistic missiles that can carry the nuclear weapons to Los Angeles and other US targets. Yonhap News (Seoul) and Reuters and CBS News

Finland is the happiest country in the world, Burundi the unhappiest