Dozens of Cuban government agents forced the shutdown of a forum on civil society in the hemisphere at the Summit of the Americas on Thursday by shouting over all the speakers until organizers postponed the meeting.

The incident is an example of what pro-democracy activists call a “climate of violence” that the regime has brought to the event.

Communist agitators waving Cuban and Venezuelan flags protested the presence of pro-democracy voices, including a representative of the United States, at the traditional dialogue on civil society that occurs the day before the Summit of the Americas usually begins in earnest. The group chanted “kick them out; get them out;” “Chávez lives, the struggle continues;” “down with the maggots” (gusano is a classic Cuban Revolution slur for members of the Cuban exile community); and “we don’t feel like being a colony of America.”

The rabble booed an event organizer for stating that Peru has the right to establish a forum representing a spectrum of different opinions and became silent only when the representative of the Castro regime spoke, who denounced pro-democracy voices as “mercenaries of the empire” [United States].

As the Spain-based outlet Diario de Cuba notes, these violent mob actions are typical in Cuba, where they are known as actos de repudio (“acts of repudiation”). Some Cuban dissidents, most notably the Ladies in White group, experience actos de repudio on a weekly basis to intimidate them into silence.

While the Ladies in White have continued to march every Sunday, the Summit of the Americas was forced to postpone the meeting in question. At press time, the Cuban Communist Party newspaper Granma states that a meeting with Cuban dissidents is being held in private with Organization of American States (OAS) secretary Luis Almagro, to prevent the Cuban mob from interrupting once again.

The mob tried to silence Almagro’s statements, as well, but he shouted over them.

In the above video, Almagro addresses the communist group, calling their interruption “an embarrassing and lamentable act” and insisting, “the voice of the OEA, the voice of civil society, will be heard, because all voices should be heard.”

“They have done worse things to silence us,” Almagro said.

Cuban dissident and exile leaders who traveled to Lima to attend the event and bring awareness to Raúl Castro’s criminal enterprise say that, because Cuba’s government was invited to attend despite an OAS ban on dictatorships participating in the organization, they are being forced to conduct their operations in fear of violence and suppression. The Cuban government blocked some of the most effective dissident leaders on the island from traveling to the event – including Berta Soler, the head of Ladies in White; anti-communist punk rock artist Gorki Águila; and theater artist Adonis Milán – but could not stop members of the exile community from attending.

Exile activists say that the Cuban regime nonetheless attempted to confuse Peruvian immigration authorities by offering them a list of pro-democracy activists they would like to see banned from the forum. One of those activists, Orlando Gutiérrez of the Miami-based Cuban Democratic Directorate, said that he and colleague Silvia Iriondo of the Assembly of Cuban Resistance were held for four hours by immigration authorities because their names appeared on a list of dissidents the Castro regime wanted banned.

Gutiérrez and Iriondo persevered with the help of the Peruvian government—whose high-level officials met with their group later on—but Gutiérrez, speaking from Lima, nonetheless told Breitbart News that Cuba’s presence at the event created a dangerous situation for pro-democracy activists.

“There is a climate of aggression and violence by the Castro regime towards those who dare to oppose it,” Gutiérrez told Breitbart News. “We’ve had extraordinary support from many Latin Americans and Peruvians, but these incidents of violence show why brutal regimes like the one in Cuba can’t be invited to these summits.”

In addition to the interruption of the event on Thursday, Cuban agents vandalized a billboard posted in Lima condemning the Castro regime, featuring a photo of one of the many violent arrests of Berta Soler. The group Justice Cuba, which works closely with the Cuban Democratic Directorate, has purchased another billboard high atop one of Lima’s main highways to avoid further attacks. The billboard features a photo of Raúl Castro and Venezuelan dictator Nicolás Maduro with the message, “wanted for crimes against humanity.” 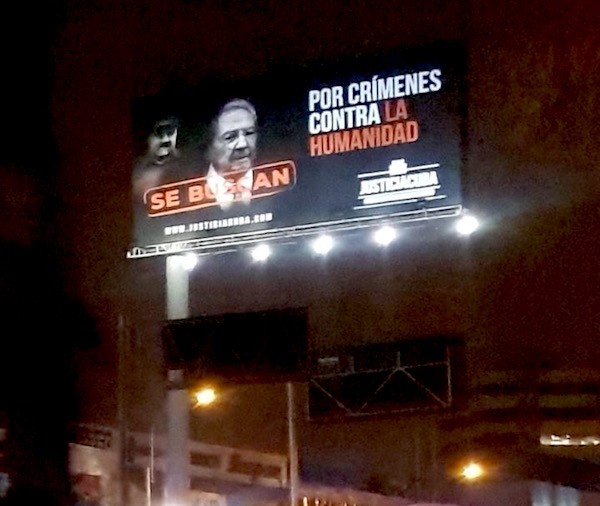 Activists are rightfully worried that physical aggression against anti-communist dissidents is imminent. In 2015—the first Summit of the Americas that Cuba was invited to—communist agents viciously assaulted dissidents who attempted to lay flowers at a bust of Cuban founding father José Martí in Panama, the host country at the time. Panamanian officials allowed the attack to occur, subduing it only after the dissidents suffered significant injuries.