ROME– Pope Francis has sent a birthday letter to Gustavo Gutiérrez, the Peruvian founder of Liberation Theology, thanking him for his “theological service” to the Church and humanity.

“I am writing to congratulate you for your 90th birthday and to assure you of my prayers in this important moment of your life,” Francis wrote to Gutiérrez, who is a Dominican priest.

“I join you in giving thanks to God,” the pope continued, “and I thank you as well for all that you have contributed to the Church and humanity through your theological service and your preferential love for the poor and the discarded members of society.”

“Thank you for all your efforts and for your way of appealing to the conscience of each person so that no one could remain indifferent before the drama of poverty ad exclusion,” he wrote. 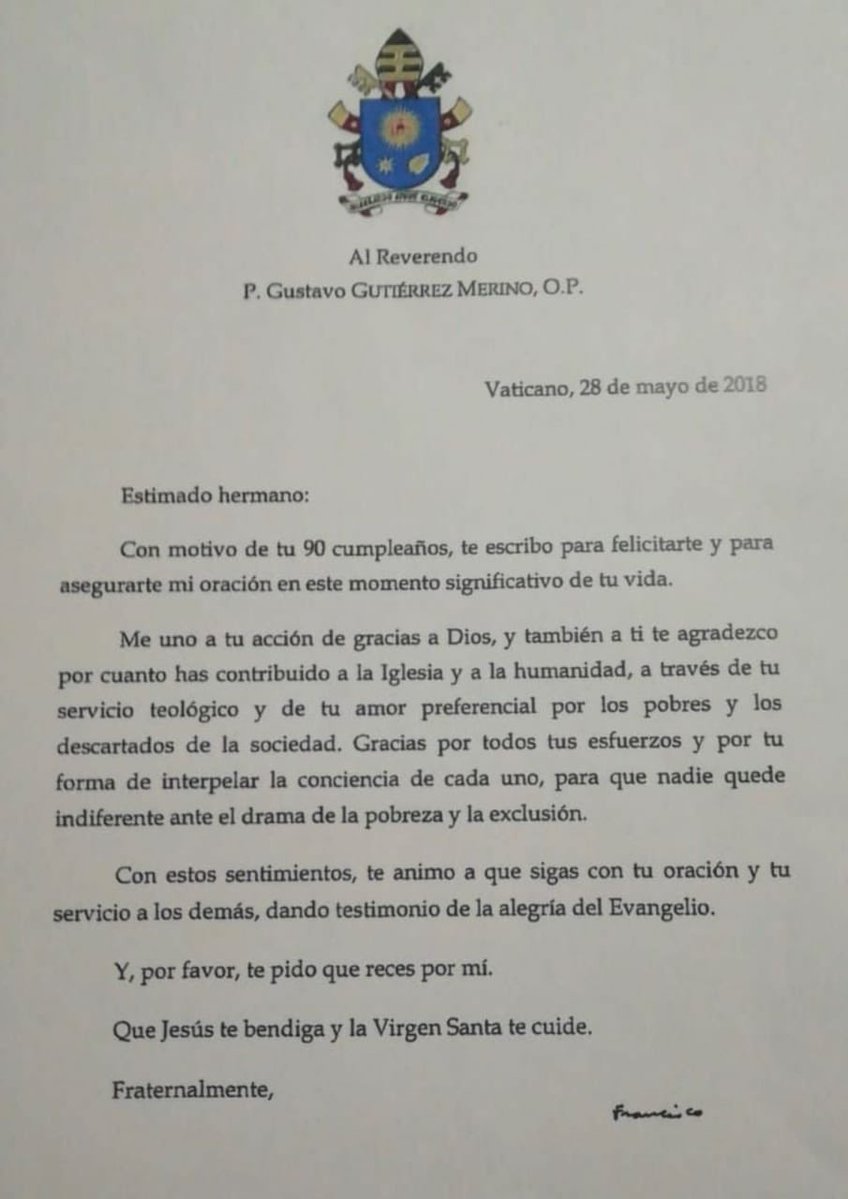 Liberation theology took its name from Gutiérrez’s 1971 book titled A Theology of Liberation. In it Gutiérrez analyzed the situation in Latin America through the lens of oppressors and oppressed, insisting that poverty is always the result of sin, and proposed a political theology of change.

Gutiérrez advocated “a profound transformation of the private property system” as well as a “social revolution” to allow for the change to “a socialist society.”

In 1984 the Vatican doctrinal congregation headed up by Cardinal Joseph Ratzinger, under the auspices of Pope John Paul II, published an instruction titled Libertatis Nuntius, which was sharply critical of liberation theology—or “theologies” as some prefer to call it, given its numerous and varied expressions.

The instruction criticized liberation theology for creating “a disastrous confusion between the ‘poor’ of the Scripture and the ‘proletariat’ of Marx,” resulting in a perversion of the Christian meaning of the poor. It also blamed liberation theology for transforming the fight for the rights of the poor “into a class fight within the ideological perspective of the class struggle.”

The document also noted that in “certain parts of Latin America,” the recognition of injustice “is accompanied by a pathos which borrows its language from Marxism, wrongly presented as though it were scientific language.”

The letter also said that certain Christians, despairing of every other method, turned to a Marxist analysis, “especially in Latin America.”

The 1986 text was issued as a complement to the first one and sought to “highlight the main elements of the Christian doctrine on freedom and liberation” as a corrective to the errors of Liberation Theology brought out by the prior instruction.

The Catholic Church has always favored paying special attention to the poor and underprivileged, summed up in its principle of the “preferential option for the poor,” but the Vatican reacted strongly to theories tinged with the dialectic materialism typical of Marxist communism and its advocacy of class struggle and violent revolution.

Pope John Paul II, who lived for years under communist rule in his native Poland and was instrumental in the eventual collapse of the Soviet system, had no illusions about Marxism and its errors and went to great lengths to keep it from penetrating the fabric of the Church under the guise of Liberation Theology.

In his role as doctrinal watchdog, Cardinal Ratzinger referred to Liberation Theology as a “singular heresy” and a “fundamental threat” to the Church.

Pope Francis, on the other hand, while denouncing the underlying materialism of Marxism, has been somewhat more sympathetic to the socialist worldview.

Just months after his election in 2013, Pope Francis held a private meeting with Gutiérrez in the Vatican, which coincided with an interview with Gutiérrez in L’Osservatore Romano, the Vatican’s semi-official newspaper. The essay asserted that because Francis is the first pope from Latin America, liberation theology can no longer “remain in the shadows to which it has been relegated for some years, at least in Europe.”

In a lengthy interview with the leftist Spanish daily El País, the Pope said that “Liberation Theology was a good thing for Latin America,” while also recognizing that it had “deviations” that needed to be corrected.

The part of Liberation Theology that “opted for a Marxist analysis of reality was condemned by the Vatican,” Francis said.

“Liberation Theology had positive aspects and also had deviations, especially in the part of the Marxist analysis of reality,” he said.

In a remarkable 2015 revelation, the highest ranking Cold War defector asserted that the KGB had created Liberation Theology, exporting it to Latin America as a means of introducing Marxism into the continent.

Ion Mihai Pacepa, a 3-star general and former head of Communist Romania’s secret police who defected to the United States in 1978, has been called “the Cold War’s most important defector.” During the more than ten years that Pacepa worked with the CIA, he made what the agency described as “an important and unique contribution to the United States.”