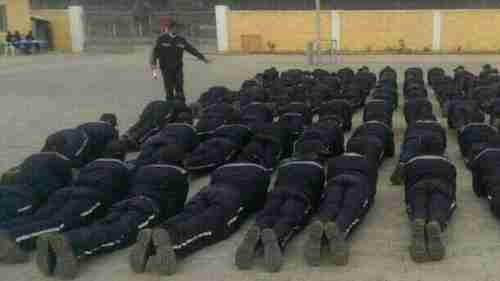 Chinese railway contractor punishes workers for refusing to do menial jobs that they were not hired to do (Standard Media, Kenya)

A series of reports in Kenyan newspapers being described as “explosive” accuse the China Road and Bridge Corporation (CRBC), responsible for developing and operating Kenya’s Special Gauge Railway (SGR), of “neo-colonialism, racism, and blatant discrimination” towards Kenya workers. The SGR train is the Madaraka Express, which operates between Kenya’s Port of Mombasa and the capital city Nairobi.

Racism is rampant, to the point where the Chinese have apparently set up an apartheid system. At the staff canteen, Kenyans may not sit at the same tables as Chinese. Kenyans may not share the company’s staff vans used by the Chinese. All the signs are written in Chinese, apparently with no translations available, to prevent the Kenyans from doing many of the jobs.

Although Kenyan workers have at least civil engineering degrees, the Chinese masters order them to perform only menial tasks, well below their skill levels. If a Kenyan refuses to perform menial work as ordered, he can be physically punished. Furthermore, when a Kenyan and a Chinese employee perform the same job, the Chinese employee’s salary is four times as high.

There are 40 Kenyan locomotive drivers employed by the company, but the Chinese do not actually let them drive the train. The Chinese are supposed to be training Kenyans to do the technical jobs, but according to one Kenyan driver who has been working at the company for over a year, “We just sit at the back and watch. There is no actual transfer of skills that is happening here.”

Chinese workers blatantly violate the rules – smoking inside the trains, urinating on the tracks, and other violations that are ignored for the Chinese workers but would immediately get a Kenyan worker fired.

I am not saying any worker should be discriminated and humiliated in the workplace but we must all appreciate that the operation of a modern train is a profession that calls for military standard discipline.

Inward-looking, haki yetu [“our rights” in Swahili] centered personalities have no place in this kind of profession, not now or in the future. They are the first crop of Kenyans employed on this project and the culture they entrench will determine whether in less than 10 years we shall depend on them.

China is building infrastructure projects in many countries as part of its Belt and Road Initiative (BRI). China does not build a project in a country for free. It loans the money at harsh terms with high interest rates. Furthermore, it demands that almost all of the work be done by Chinese workers, who get paid out of the money that has been loaned, so most of the money that China loans to the country is returned to China in the form of remittances and payments for services, but the country still has that debt, and has to repay the same money to China again, with interest.

Theoretically, the Chinese workers are supposed to train the local workers, and responsibility for the project is supposed to be turned over to the country within a few years. But as we are seeing in the case of Kenya’s SGR, the Chinese masters are forcing the Kenyans into menial jobs, are segregating themselves from the Kenyans, and maintaining all signs in Chinese so that the Kenyans are not being trained.

This is being called “Debt Book Diplomacy” (as opposed to “checkbook diplomacy,” which the U.S. used to be accused of). The poster child for how it works is the Port of Hambantota, a Chinese infrastructure project in Sri Lanka, funded with a loan from China, with almost all the labor performed by Chinese workers. Sri Lanka was unable to repay the loan, and the government was forced to give the Port to China. So now Sri Lanka has a large seaport owned by China, and a large Chinese enclave with hundreds of Chinese families, with no benefit to itself and to its own people.

Kenya has been going on a public borrowing binge. Kenya’s public debt is over $50 billion, including $4 billion in loans from China for the SGR.

Theoretically, the Madaraka Express, the SGR train that operates between the Port of Mombasa and the capital city Nairobi, is supposed to pay for itself, just like Sri Lanka’s Hambantota seaport. The World Bank in 2013 warned Kenya that the railway project was a bad deal, but Kenya went ahead with it anyway.

However, it now emerges that in the first year of operation, the only managed to bring in $10 million in revenues, far short of the fantasy amounts that were originally promised. Furthermore, even that amount is dependent on the government forcing businesses to use the railway, even when it is not the best choice.

According to David Shinn, a former diplomat and a professor of international affairs at George Washington University:

Keep in mind that this is a loan from a Chinese bank. A Chinese company by contract is required to build the projects on an enormous amount of that loan money that’s going to go straight into the pocket of a Chinese state-owned company. It’s going to have a percentage of Chinese labor.

And most of the material that goes into the project will be manufactured in China. So, Chinese companies are making a profit on that. There are two or three wins for China, you know, [and] one win for Kenya and Ethiopia, being that they get a railway built that no other country is offering to build for them.

Kenya is not able to make its debt payments in these circumstances. Rumors are beginning to spread that Kenya will be forced to give up the Mombasa seaport to the Chinese, just as Sri Lanka was forced to give up the Hambantota seaport. The government is denying these rumors but has not explained how the debt will be paid. Soko Directory (Kenya) and Standard Media (Kenya) and VOA and Center for Global Development (4-Mar-2018)