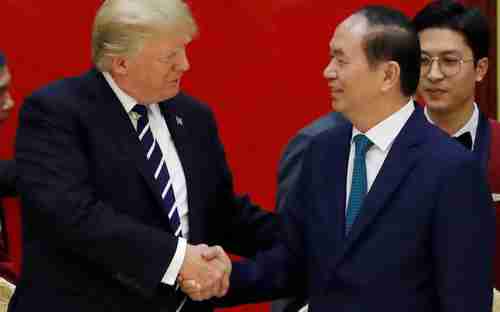 Neither China nor the United States is a member of the Association of Southeast Nations (ASEAN), but both had representatives present, and their competing strategies were the main subjects of discussion. ASEAN has ten members: Brunei, Cambodia, Indonesia, Laos, Malaysia, Myanmar, the Philippines, Singapore, Thailand, and Vietnam.

For lexicographers and cartographers, the main news is that Western nations, including Australia and the US, have given a new name to their strategies, referring to the “Indo-Pacific strategy” instead of the old name, “Asia-Pacific strategy.”

US Secretary of State Mike Pompeo had earlier discussed a plan to invest $113 million in technology, energy and infrastructure in the Indo-Pacific region. On Saturday he added:

“As part of our commitment to advancing regional security in the Indo-Pacific, the United States is excited to announce nearly $300 million in new funding to reinforce security cooperation throughout the entire region.”

The reason for the change in terminology is to emphasize that the Pacific Ocean and the India Ocean form a combined strategic region. However, the terminology change is annoying to the Chinese, who prefer the China-centric name “Asia-Pacific,” while the name “Indo-Pacific” gives more emphasis to China’s historic enemy, India.

Chinese media were bitterly scathing in their response to Pompeo’s announcements:

“What is the Indo-Pacific strategy? Many complain about its vagueness. Its most innovative part may be the name itself. Washington probably hopes the rest of the world would stop asking questions, tacitly understand Washington’s intentions and firmly gather around the US after a few exchanges of glances and together begin to counter China’s rising influence….

ASEAN members are not sure what the US Indo-Pacific strategy entails. The US announced only an investment of $113 million, which also includes India. The amount seems only sufficient to build an overpass perhaps in the center of Mumbai. Washington is using a strategic gimmick. It is insincere about pushing forward economic prosperity of Indo-Pacific region.

As a concept, Indo-Pacific strategy generated some media and psychological impact. But this is perhaps the only points it can score. If the US wants more, this strategy will be the abyss that consumes much US resources and its output can hardly match its input.

What’s more important, this is not the era where geopolitics rules all. The US has treated China’s Belt and Road initiative, which focuses on mutually beneficial cooperation, as strategic expansion, and is trying to prohibit Asia from marching forward through connectivity. Washington’s move is against historic tide. Even if it plans to invest 100 times its current amount, the investment will be devoured by the historic trend.”

The commentary mentions China’s Belt and Road Initiative (BRI), where China has committed $900 billion (with a “b”) to Asian countries, in contrast to America’s “paltry” commitment of $133 million (with an “m”). Reuters and Global Times (Beijing) and Asia Times and ASEAN

Many ASEAN countries were disappointed at the lack of specifics in Pompeo’s promise that “The United States will continue to create the conditions for mutual prosperity in a free and open Indo-Pacific.”

However, many of these countries are quite concerned about the numerous problems associated with BRI, including corruption scandals and concerns about opaque financing, delays and mounting debt problems linked to the loans Beijing has provided to its partner countries.

In the past couple of years, we’ve seen how these projects work, in countries like Sri Lanka, Kenya, Djibouti, Malaysia and Pakistan:

Malaysia has suspended a $14 billion rail line because of graft and corruption. Pakistan cancelled a $14 billion dam project last year because of excessive debts. Kenya accused China of “neo-colonialism, racism and blatant discrimination.” Other countries are extremely anxious about Chinese investments.

The US offer of $113 million plus $300 million is paltry compared to China’s offer, but the US offer is aid, not a loan, and it’s the local workers who will build the infrastructure project.

That’s why, when announcing these aid packages, Pompeo emphasized “partnership, not domination” in Asia, and promised to “create the conditions for mutual prosperity in a free and open Indo-Pacific.” Nikkei and Malay Mail and Washington Examiner